This is review number three hundred and twenty seven. This anime is part of the Fall 2010 lineup, and it’s the highest voted anime in my poll right now. The anime I’ll be reviewing is called Bakuman, and it’s a twenty five episode anime about the authors of Death Note telling a story not about genocide. Actually, this is a pretty awesome anime and I can’t believe I’ve only seen it now. Let’s read on. 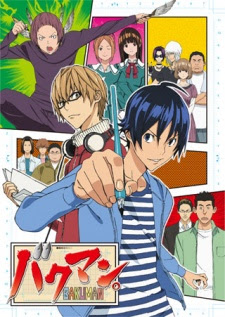