This is review number three hundred and seventy nine. This anime is part of the Summer 2014 lineup. The anime I’ll be reviewing is called Tokyo ESP. It’s a twelve episode anime about something that just irritates me. F*ck it, let’s just read on.

END_OF_DOCUMENT_TOKEN_TO_BE_REPLACED

This is review number three hundred and sixty. This anime is part of the Winter 2016 lineup. The anime I’ll be reviewing is called Dagashi Kashi. It means “cheap sweets candy” but it’s also a play on words that also means “however”. Seriously, run the word on google translate and it’ll give the play on words instead. Anyways, this is a twelve episode anime about candy otaku and the dangers of sweets. No, it’s something much more surprising, actually. Let’s read on.

END_OF_DOCUMENT_TOKEN_TO_BE_REPLACED

This is review number three hundred and twenty three. This anime is part of the Fall 2010 lineup. It’s also the second highest voted show in my poll. The anime I’ll be reviewing is called Kami Nomi no Shiru Sekai or The World God Only Knows. It’s a twelve episode anime about a guy that plays a lot of video games and he lands hot chicks because of it. It’s pretty awesome. Let’s read on. 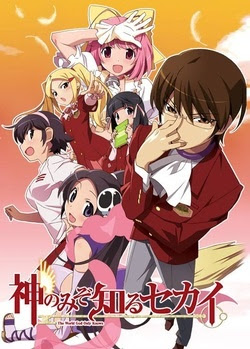