This is the second part of my compilation of the best (and worst) anime moments of 2012. I’ve always wanted to do a top thingy to conclude my anime watching of 2012. I’ve seen a lot of anime and made a lot of reviews about it. Seriously, I’ve seen too much but not enough to reach my goal. Anyways, before I move on to the anime of 2013, I want to do a wrap up of my anime experience first.  Any idiot can make a top ten list though and it feels too normal for me. I want to do something excessive so I did a top hundred list. I hope you enjoy reading this unnecessarily long list as much as I had fun making it. Any complains and disagreement on the ranking of the list is gladly welcome. Just voice your thoughts in the comments section. Please be mindful though that this is MY list and I am as bias as a dude that gives Oretachi Tsubasa wa Nai a score of 8 of ten. 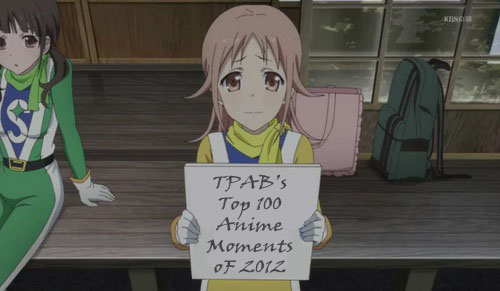 END_OF_DOCUMENT_TOKEN_TO_BE_REPLACED

I had the annoying task of reuploading the pictures in my blog because my bandwidth gave up on me. It’s the first time it ever happened though I guess its expected since I’ve had the account since ’08. Some of the blogs are still picture-less but whatever. Que sera sera, I guess.

Anyways, I suppose I should thank people for trafficing my site till the bandwidth gave out. I’ve been pantless for two months now and I got a thousand views already. Thank you. Thanks to all those who lurks in my site. I wanna thank those who give me some feedback especially. : )

Enjoy some Black Rock Shooter GIFs. There are three of them. The quality isn’t that nice. I suggest opening the gifs on a new tab for it to load faster.

END_OF_DOCUMENT_TOKEN_TO_BE_REPLACED

Hello there. This is review number seventeen. I am going to review an anime I have been dying to see. It’s Black Rock Shooter the series. I hated the OVA so I am hoping the anime can be a much better viewing experience. I’ll also get to see that girl in the black bikini bra and the short shorts fly around and fight people. It’s going to be awesome.

Huh? Only eight episodes? That’s weird. That’s the shortest I’ve seen on an anime series excluding OVAs. I recently saw Moshidora that butchered the plot with ten episodes. Can eight really be enough to give the series justice? Let’s read on.