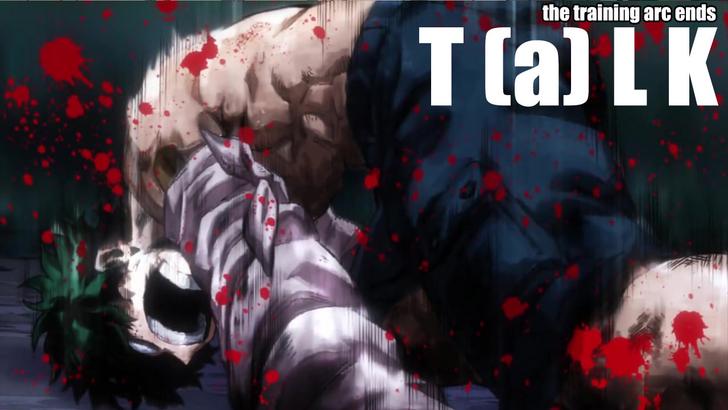 Who is the mole?! We don’t know. The T(a)LK did talk lengthy about who it should be. Go on and read that sh*t. Also, we’re finally caught up with the show. It only took seven episodes for us to e updated, but who the hell read these anyways. um…thank you for reading, dear readers. I love you.

TPAB: so onto ep 7. It’s a short episode anyways. I hated it. The training arc was THAT short?!!!!

Keiko: It was filler/transition ep

Keiko: Yeah the training arc felt short but also right length to me. Villains attacked so it couldn’t be helped really

TPAB: not even a fight before the escape. Villains just ran away, lol. After a cliffhanger?!

Leap250: they had a goal and they achieved it really

Keiko: I kind of expected them to make their exit since they had Bakugo and all. They had no reason to stay and fight

TPAB: at least have one guy stay and show off, but yeah, sure. Villains were smart.

Leap250: plus we find out later that Vlad King already called for help. If you call grabbing the scruff of someone’s neck a moment, sure xD

Keiko: Yeah it made sense for them to leave at that moment 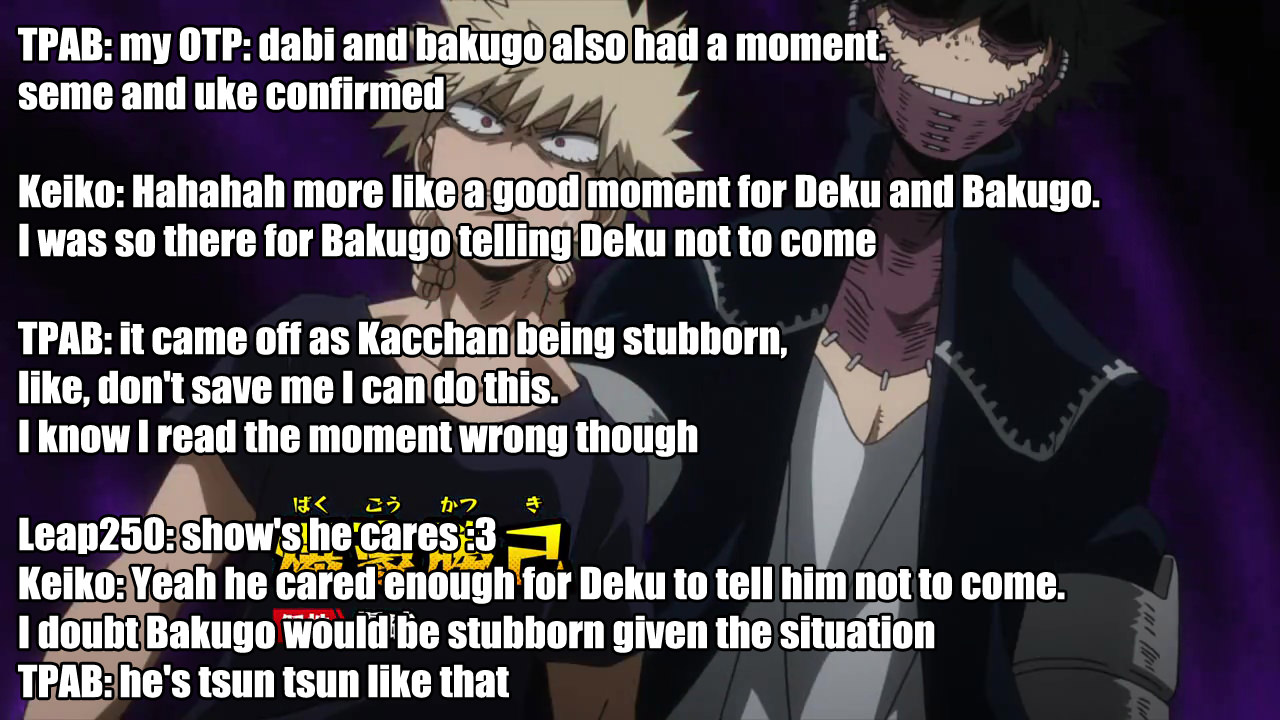 Keiko: Yeah All Might’s going to crash their little party. Though I wonder what Deku will choose given that he has been given the opportunity to sneak an attack by Kirishima

TPAB: next arc is rescue arc, right? Will All Might play a part in it? Really crash the party?

Keiko: Yeah I feel like he’ll go because it’s Bakugo we’re talking about and if he can move, he will go

TPAB: or is it a rogue rescue mission by Deku and gang?

Leap250: on both, lol, both happen, but at the same time not really

Keiko: Maybe Bakugo does something on his own

Leap250: what I will say is, you get to see more pro heroes xD

Keiko: Well there’s that at least!

TPAB: like Vlad the deadman wonderland rip off, lol

Keiko: I can look forward to that!

Leap250: there were all shown in the OP I think, haha 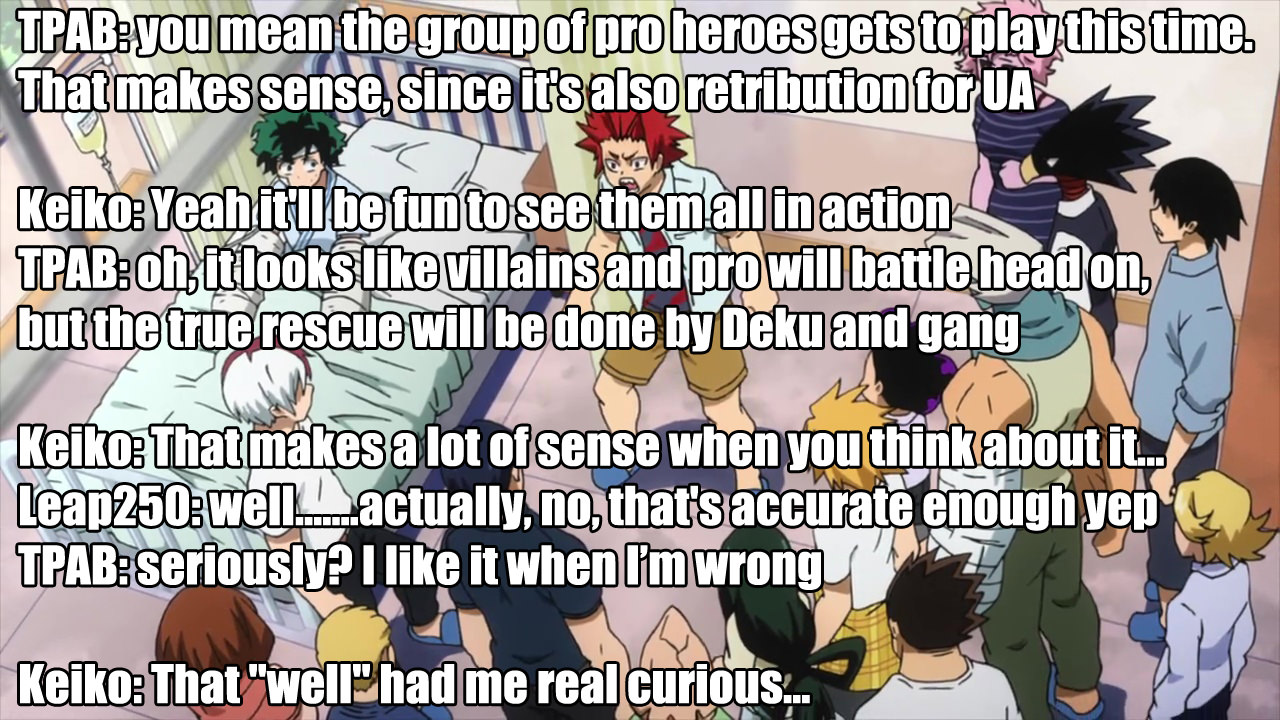 TPAB: answer me this, how important is class rep in the arc? Since he isn’t really a rogue type

Keiko: Yeah he seemed really against it due to what happened with Stain

Leap250: just what you see. He’ll be persuading the rescue squad to not go through with it. causing emotional turmoil among the class

Keiko: Oh fair enough. For him, that makes sense right now. It seems like he hasn’t quite recovered yet from the guilt anyways

TPAB: oh, I like that. what about bug boy? How vital is my guy?

Keiko: He probably plays no role…

Leap250: I don’t think you can count on bugs when you’re going to the city, lol

TPAB: how the fudge do you think he passed the entrance exam beating robots with birds? 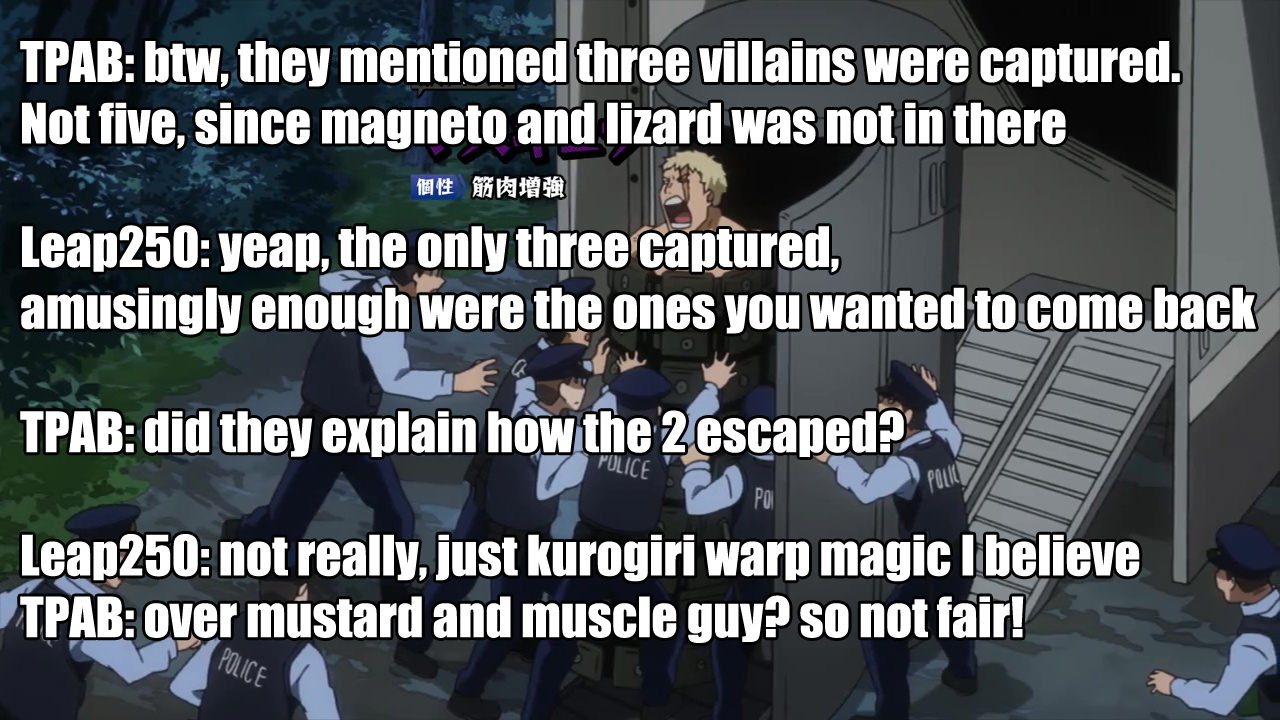 Keiko: That would make sense…True… some of the good villains are caught leaving some of the boring ones

TPAB: is magneto and lizard part of the incoming rescue arc?

Keiko: Please say no. I’ve had enough of the lizard already

Leap250: I mean, they’re all going to the villain hideout

TPAB: that is a yes, cakes

Keiko: Damn! Guess I’ll just have to put up with them again. Hopefully the other villains make up for it

TPAB: toga is still keeping us waiting, so there’s that. Oh, I love the fall out of the training arc. It always ties back to how it affects society with news coverage and stuff

Leap250: yeap. I especially liked how it builds off of how mad Bakugo was shown on TV

TPAB: and that CNN/Fox like arm chair discussion, I love it. So modern

Keiko: Yeah it’s a good way of building a realistic picture of the world as well. It’s not just about students in a school. There’s a bigger picture here about the hero society as a whole

TPAB: a smart update to the shounen cliche as well, since a lot of Naruto fights exists in a bubble. yeah, the villains plans was to humiliate the heroes

Leap250: to be fair to Naruto though, they’re supposed to be hidden villages anyways, lol

TPAB: what about bleach? They fight on cities, lol. But yeah, it’s just an overlooked part of shounen that I love is finally being noticed

TPAB: airing the tournament arc on TV also backfired on them. It’s awesome.

Keiko: Yeah just goes to show how media can be manipulated 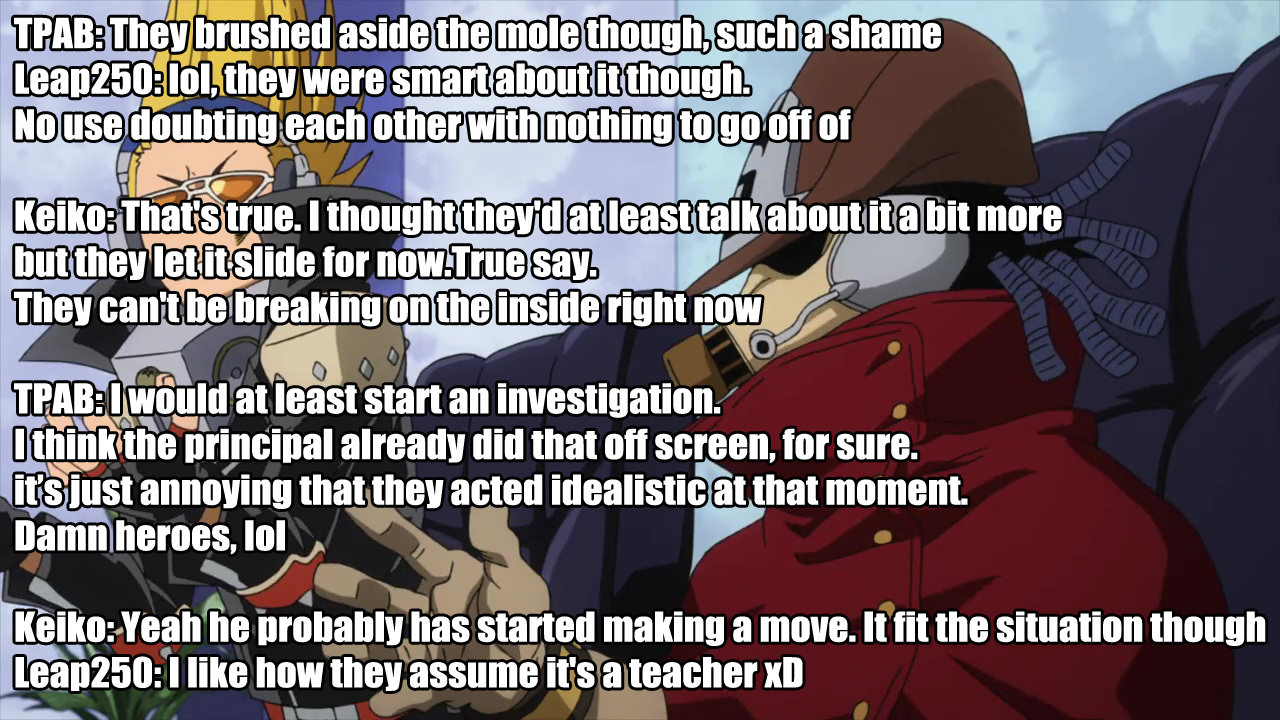 TPAB: do you guys think it’s a teacher? I still think it’s the police guy All might talked to

Keiko: I think it could be either teacher or student

Keiko: I don’t think it’s the police… I feel like it’ll be someone inside the school

TPAB: I remember that the students didn’t know they’ll be at the cat’s farm, unless the student was communicating in real time to the villains. But if it’s a well-planned assault, the villains would’ve known the area first

Leap250: they could be wearing a tracker or something, or make a phone call while being invisible, lol

Keiko: True lol. They could still communicate without others knowing

TPAB: they brought mustard for a specific reason, to mix with dabi’s flame, so it was a really well thought out plan. But I guess you could send birds to communicate with the people too

TPAB: I feel like the author is sitting on the identity because he is also not sure who it is. hahaha

Keiko: I think he’d have figured that one out by now no?

TPAB: he’s still figuring out how make bug boy the mole. Hahaha. Anything else in this ep?

Leap250: well, there was Deku’s breakdown

Keiko: Oh yeah that happened. Kind of expected since he didn’t save Bakugo but watched him being taken from right under his nose. Considering how desperate he was, I expected him to breakdown if things didn’t go well

TPAB: he sacrificed so much, so I feel for him, since all of it just wasn’t enough

Leap250: just one less person saved is still one person too much

Keiko: Yeah… You could feel the loss at that moment

TPAB: makes for a satisfying redemption angle though xD unless Bakugo turns evil

TPAB: Sasuke is part of the Uchiha clan!!!! Hahaha. btw, the entire class is seen in Deku’s room. Will all of them join the rescue???

Leap250: the class is torn on it — with one particular student taking it harder than the rest

TPAB: oh, so not all of them will take part in the rescue. That makes sense

Keiko: Yeah that makes sense… it’d be too big of a group if all of them went

I also have a Tea Time post to edit, so yeah, FML at the moment. I guess it makes me busy and occupied. Gee, I sghould review some sh*t too.

Anyways, what do you guys think of the Sasuke retrieval arc?