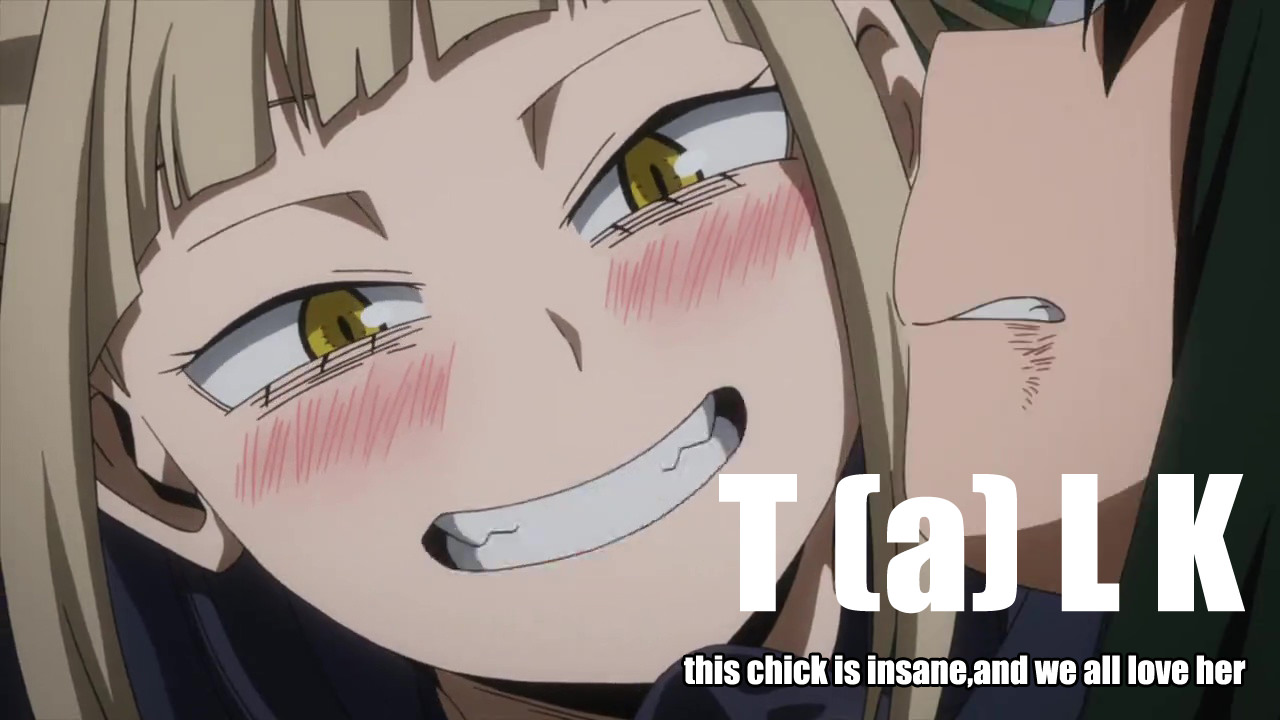 Yeah, they finally introduced crazy yandere girl, and a lot of stuff also happened. The T(a)LK team now breaks down this awesome episode

TPAB: my fave episode, after the muscle guy fight

Keiko: I’m trying to separate the two eps in my head and am failing miserably right now…

TPAB: I discussed episode 5 separately with you guys. ep 6 is a fave for me, cause it balanced out the messiness of ep 5, but ep 7 disappointed me

Keiko: Ep 6 was the villains and Bakugo’s kidnapping right?

Keiko: Oh ok. Yeah it was a pretty good ep!

TPAB: ep 5 was deku just running around. ep 6, he actually did something to finally fight back. They should’ve put mustard in this ep. I miss him already

Leap250: yeah, but deku wasn’t supposed to be the highlight of that ep anyway, lol, and too bad xD

Keiko: Hahah we’ve said goodbye to mustard already lol. True… It did feel a bit all over the place since there was no real clear focus. Too many things going on 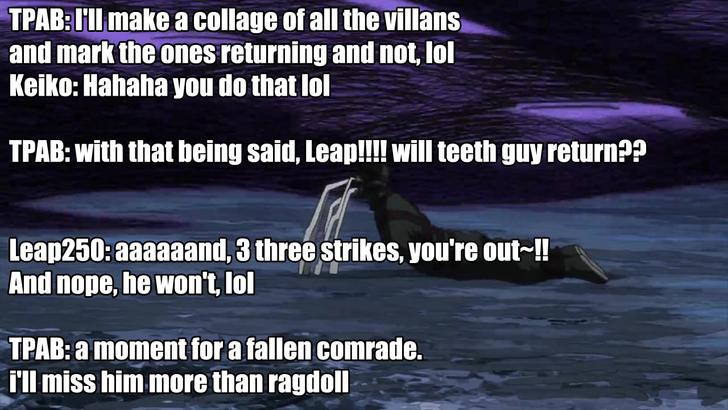 Keiko: Sames… he was an interesting villain 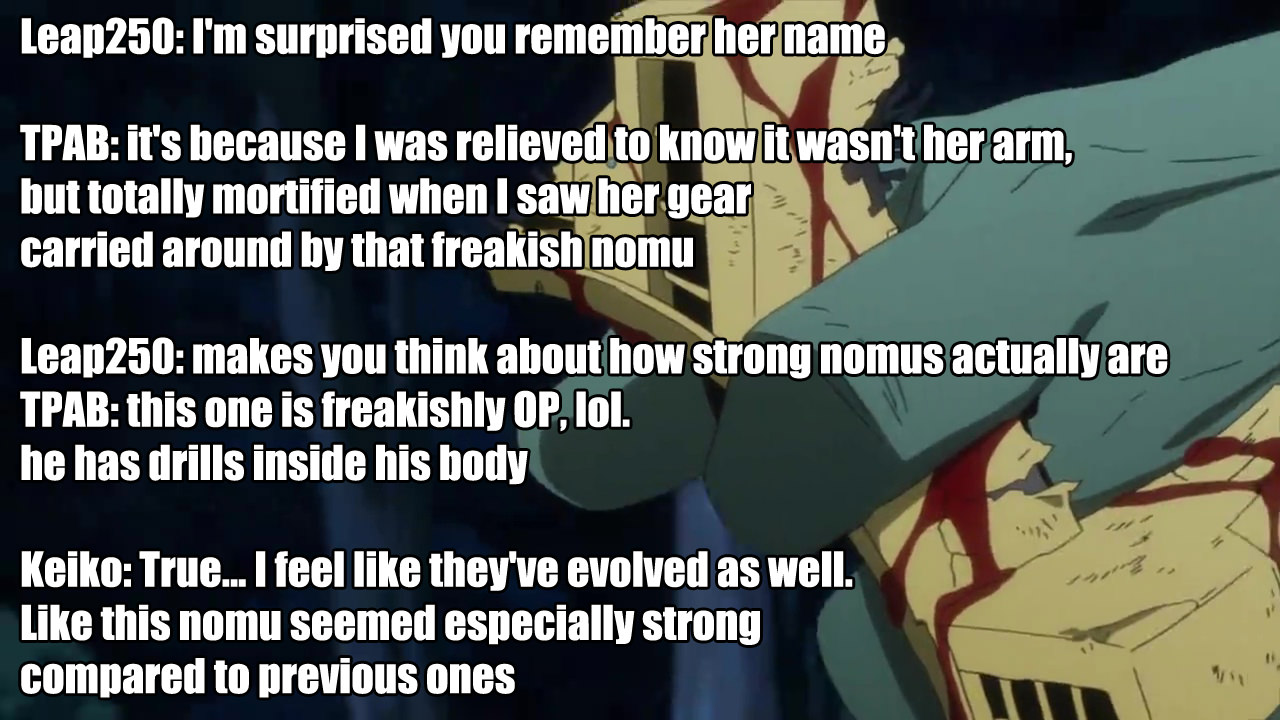 Leap250: the one all might faced in S1 is up there too

TPAB: am i evil for rooting for the nomu when it was going to kill yaoyozuru and the other guy? haha

Keiko: Yeah…. you really hate some of these students huh?

TPAB: on the bright side, bug boy and hagakure was seen in ep 7, one was knocked out, the other was just background character. lol, I wanna see some of them die.

Keiko: 😮 noooo why do you want some to die? That’s mean

Leap250: she could just be lying down as an act y’know xD

TPAB: yeah, lol. she’s more suspicious than bug boy, and i dunno, Naruto was fun when the dog died. i don’t even watch naruto

Leap250: oh, here’s something, anyone remember who partnered with Hagakure?

Keiko: How did you remember that?! 😮

TPAB: it was a very useless power. i kept thinking how it can be powerful

Keiko: Makes sense. It is a pretty useless power

TPAB: adhesive dude felt like plot device for that specific moment though

Leap250: I just asked because in the manga I remember there was a bit where midoriya was trying to remember everyone’s places, and he couldn’t place hagakure anywhere. surely a quirk that grafts stuff to other stuff would be way more secure than any adhesive that she can create

Leap250: odd quirk by the way. you see how he grafted his skin to yaomomo xD

Keiko: Yeah it was kind of freaky really

Leap250: wait wait… you were talking about that adhesive dude?

TPAB: who were you referring to? when I said adhesive dude??

Leap250: I was more confused with why he’d be with hagakure, lol, and when I hear adhesive dude in MHA I think of Sero xD

TPAB: this is why they have names, hahahaha

Keiko: On its own it is pretty useless really 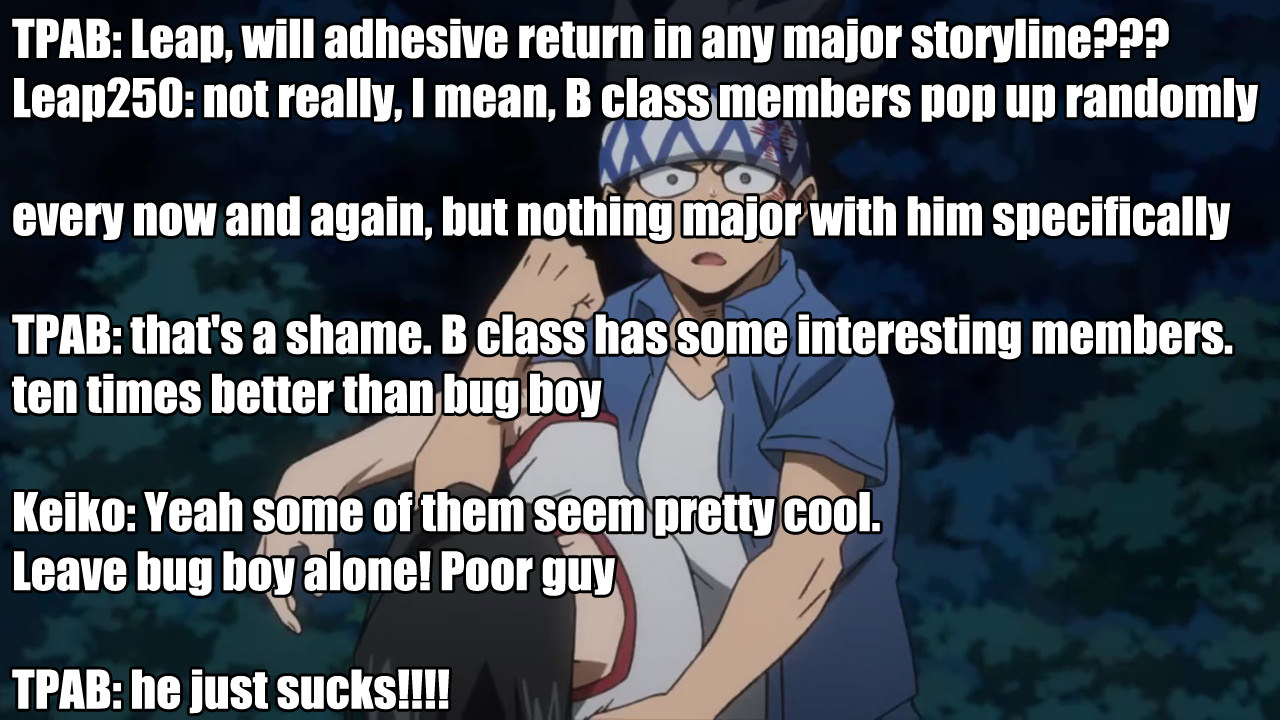 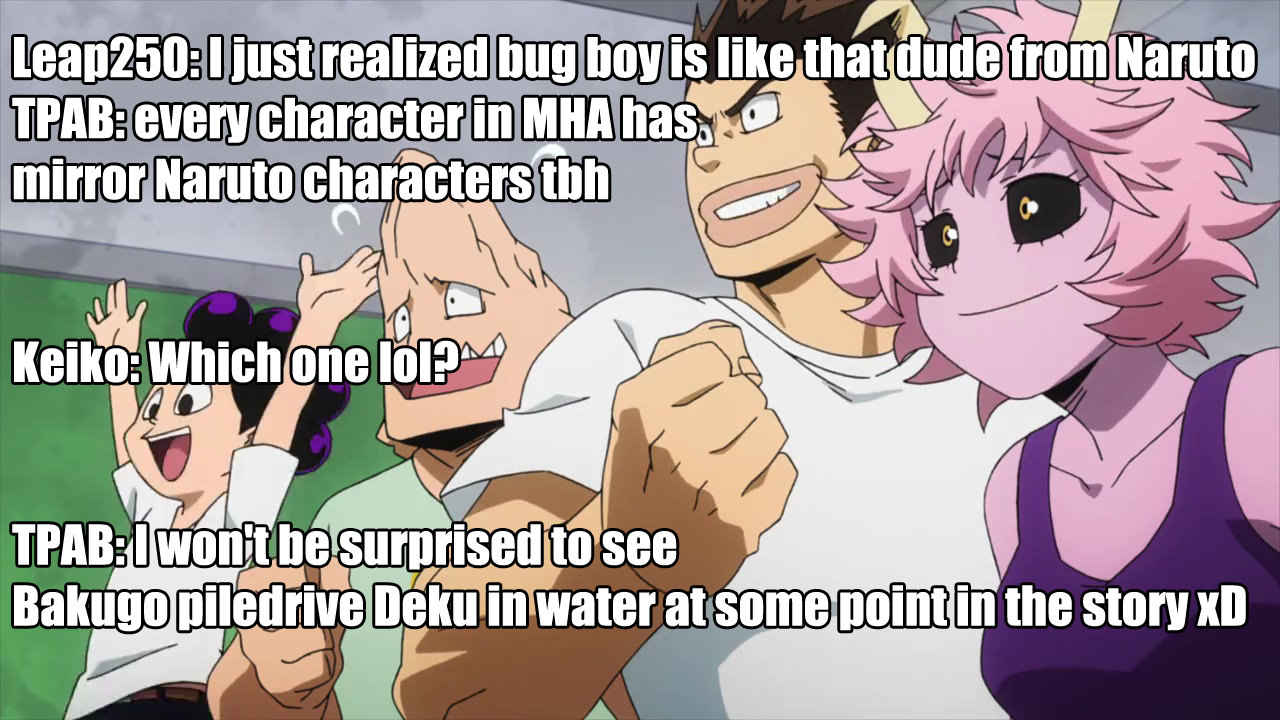 Leap250: just his quirk though, the guy who could control insects, lol. nah, he’s more of a powerbomb kind of guy

TPAB: so you all expect him to turn evil too? keiko hated the idea, lol

Keiko: Yeah I hate the idea of Bakugo turning evil…. seems kind of like a predictable move

Leap250: but, I will say that my initial expectation was wrong and leave it at that, lol

Keiko: Ooo 😮 Now I want to know what will happen

TPAB: hands guy would at least plant seeds for a later story, I think. btw, I love confused Bakugo in this episode. He’s so adorable 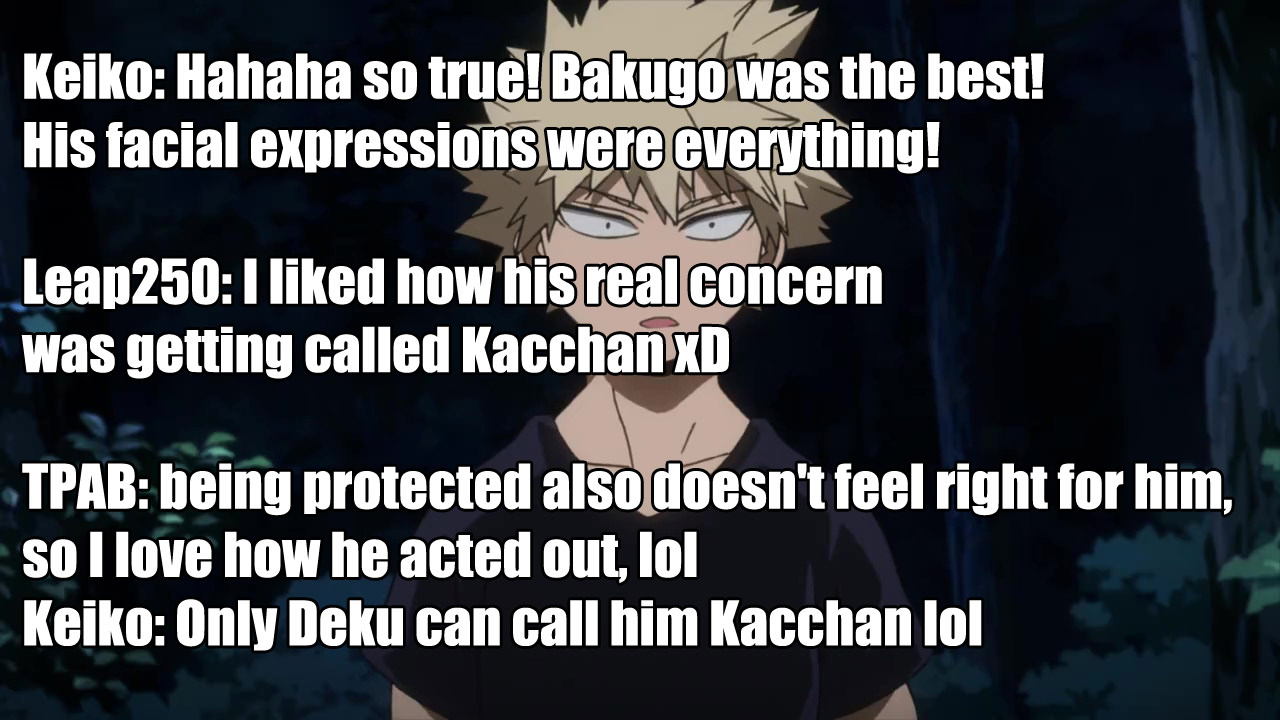 TPAB: but Deku is an all star in this arc, huh

Leap250: pretty much, lol, my favorite has to be when he kinda made an Avengers team on the spot, lol

Keiko: Yup! He is the main character lol. Hahah yeah and took complete lead of the team as well

Leap250: says they can even take on All Might with that lineup, hahaha, that was sick

TPAB: he went overtime. I was seriously OK with him fighting muscle guy, but wow, he had a hand in everything in ep 6

Keiko: Yeah lol I’d love to see them give it a shot… see of they can actually go up against All Might

TPAB: yes, dream team vs all might. I wanna see that fight 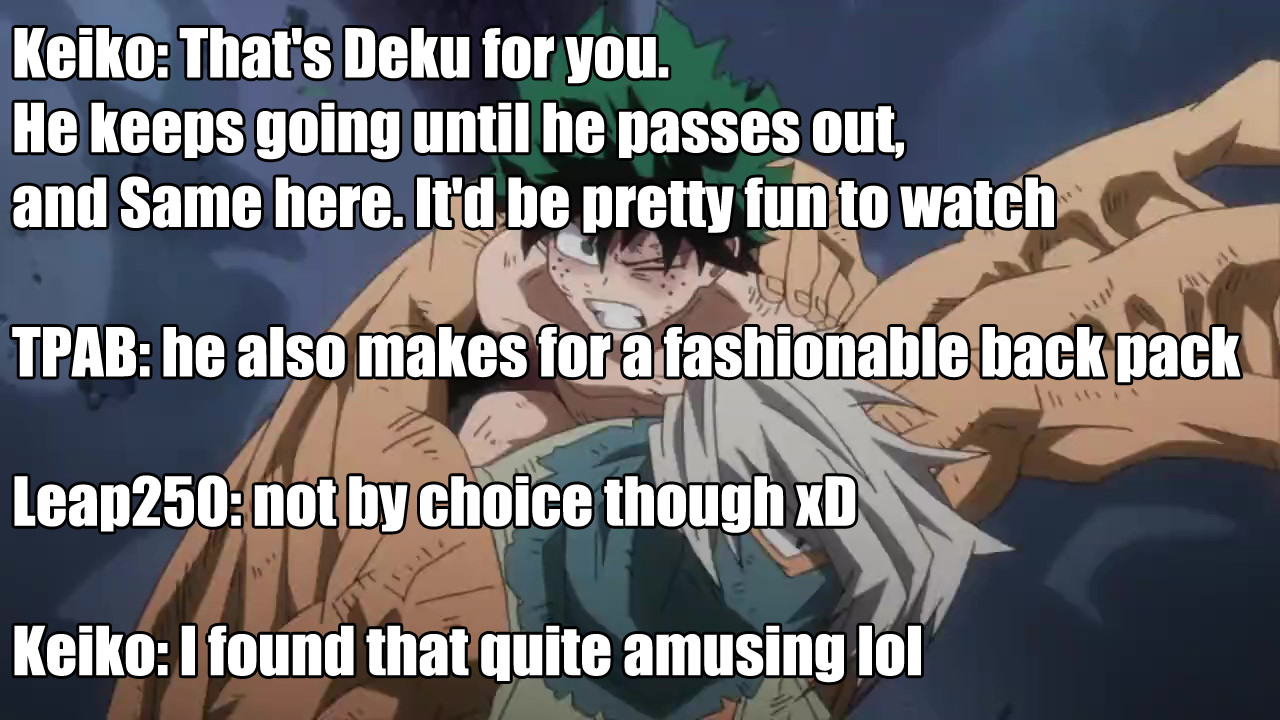 Keiko: I love her!

Keiko: She seems like a crazy girl perfect for Shigaraki’s team lol

Leap250: any guesses on her quirk?

TPAB: she can control people with their blood?

Keiko: Something to do with the blood?

TPAB: I seriously want to know. They never showed it

Leap250: yeah, blood is a requirement for her quirk

Leap250: my hint is that it’s not an entirely offensive quirk on its own

TPAB: the villains also said she should’ve gotten 3 people’s blood, but only got ochako’s

Keiko: Yeah… I wonder what she’ll do with Ochako’s blood. I’m curious

TPAB: I almost fainted when she stabbed ochako with that needle, lol

Keiko: Yeah that was pretty good

Leap250: poor tsuyu though. a knife to the tongue, ouch

Keiko: She knows a girl in love when she sees one lol. Yeah I felt sorry for Tsuyu

Leap250:  oh yeah, this ep shows her falling for deku too, lol

TPAB: she mentioned she already fell in love when they assembled at the meeting point. I think she went doki doki when deku and gang saved ochako 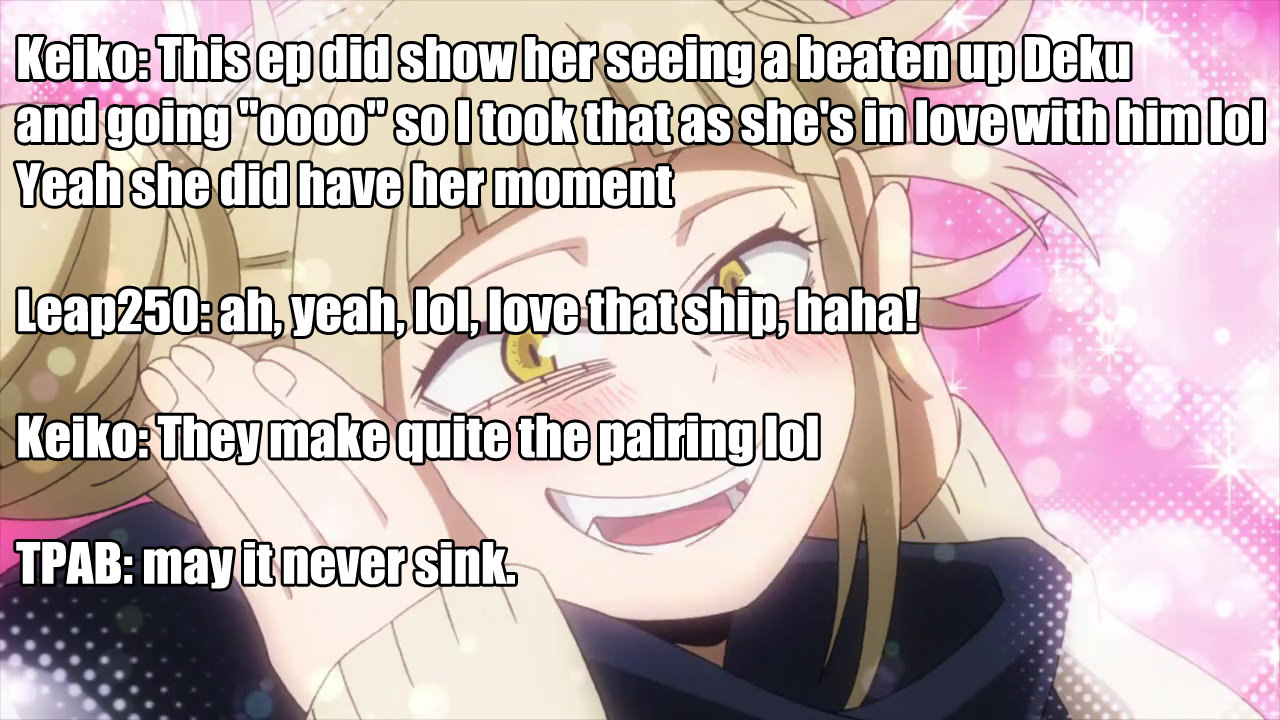 TPAB: oh my gawd, i love the scene of belly button boy almost killed by stitches. I should remember names, lol. It’s getting ridiculous

Keiko: That was a really close call

Keiko: Lol yeah the struggle with names is real. Thanks Leap! Lol I can’t remember all these names

TPAB: aoyama was shaking in his boots, lol. i love it, but it seems dabi was nice enough to not bother

Leap250: no reason for him to survive that encounter, lol

Keiko: Yeah… thats the normal response lol. Hahaha yeah it’s not like he’ll do anything 😛

TPAB: will aoyama have a story arc??? he should, lol

Leap250: …yep, he will xD it’s actually the arc now currently in the manga, hahaha

TPAB: it starts here, right? or no?

Keiko: Oh wow 😮 so he gets his own time in the spotlight! Guess we won’t see it till way later

TPAB: ah, so his cowardice in this story had no bearing? It was a powerful scene, since he is supposed to be a hero. I think he’s the first one to do that, cower in a corner

Leap250: not really, but yeah, this was a moment for him for sure. This was similar to mineta in S1 though

Keiko: But it was also a normal reaction really. True Mineta was like that in S1 as well

TPAB: oh yeah, but aoyama came off as more cowardly to me. I guess he just stood out in a sea of people trying to fight for their lives

Leap250: that, and he was alone, lol. at least with mineta he had deku

TPAB: to be fair, I think he only had his redemption because deku was there, lol

Keiko: That’s true. Aoyama had nobody and had a collapsed person next to him…Hahaha that’s true… Mineta is a real lost cause lol

TPAB: hey, adhesive boy was in the same position

TPAB: discount tape boy hahaha. how about magic dude, you know his name??

Keiko: Too many characters! I can’t do names at all lol

TPAB: yeah, the bad guy. I like him. he was awesome

Keiko: Ohh right that’s what it was

Keiko: Works with his quirk lol

TPAB: I can name him better, lol. He can trap people into beads or something

Keiko: Yeah that’s how he stole Bakugo and Tokoyami right

Leap250: or, y’know, compress things to a smaller size. tokoyami has had the worst luck in all this

Keiko: True… he went from having Dark Shadow out on a rage to being caught in a marble. What luck. True… His quirk is pretty useful 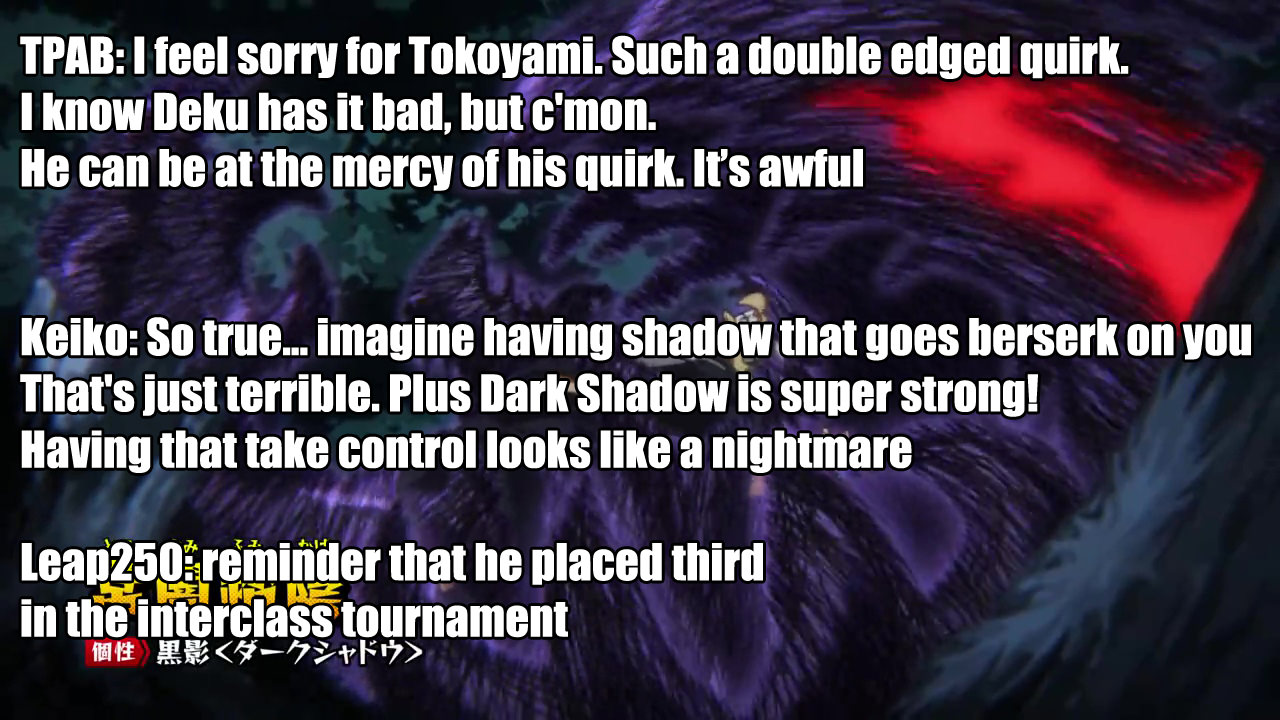 TPAB: yeah, but sunlight is his weakness, lol. A resourceful villain can work around that just like what Deku did. again, all star!!!!!

Leap250: yeah, that plan to lure out Dark Shadow was just amazing

TPAB: 2 birds with 1 stone. it was awesome

Keiko: Leave it to Deku to think of something like that

TPAB: which makes him scary good. them brains of his is unreal

Keiko: All those years of noting down how a heroes quirk be used is coming in handy… he can see the smallest of opportunities and how to use a quirk to the best of its abilities. He’d make a good leader if not anything 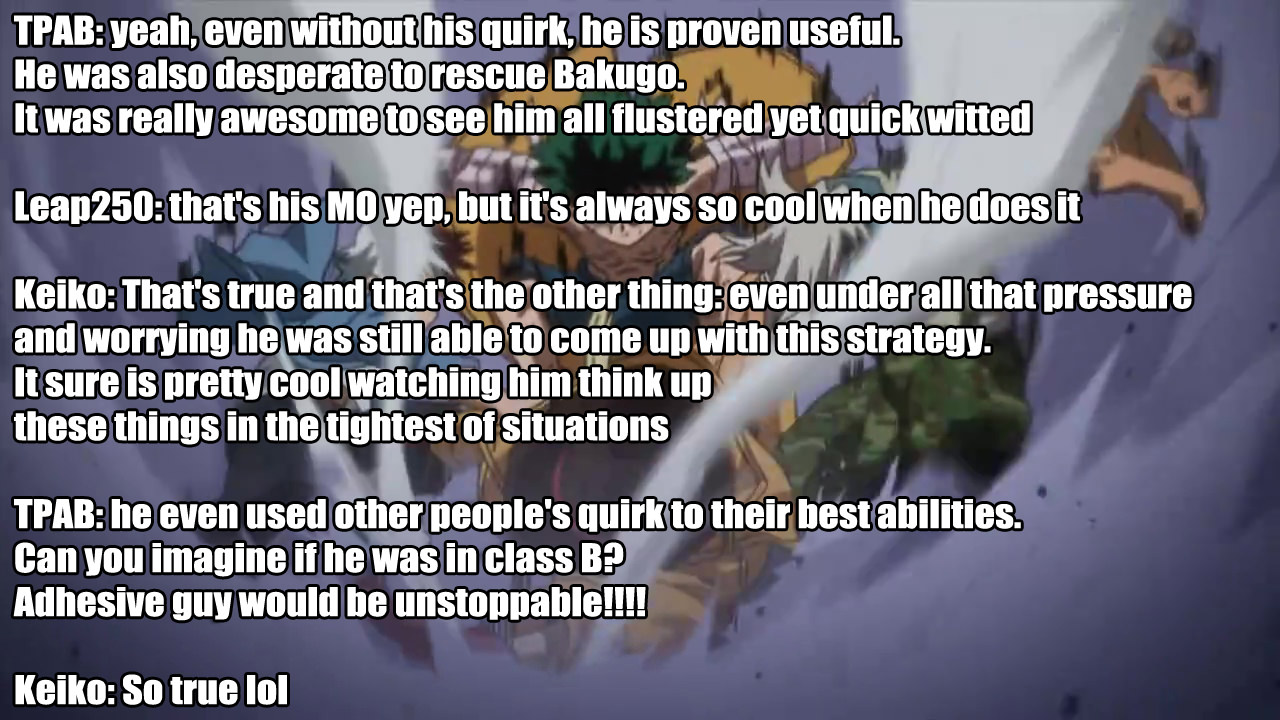 TPAB: anything else, guys? There’s that cliffhanger. Omg, a reason why i don’t watch weekly

Leap250: kind of a bad spot to be in xD right in the middle of all the baddies, lol

Keiko: Hahaha yeah…. the only time I hate watching weekly is with cliffhangers like this one. Yeah what a place to fall

TPAB: it literally just cut. It didn’t end of a soft note. They just crashed, and then boom. ED song

Leap250: no place else to cut really. I think that’s how the chapter transitioned too

Keiko: It was a good cliffhanger I’ll give it that. It was a pretty good place to end the ep

TPAB: an effective one, yeah, because I was so absorbed with the chase. I guess now is a great time to talk ep 7??? ratings, guys

Keiko: I’m going with 8 as well

Editing this is starting to hurt, but I’m just glad we’re slowly cranking out these posts. Anyways, what do you guys think of this episode? What do you think Toga? I love her so much!!!