This one is about my experience doing episodic reviews. I have a lot to say, so this one is pretty long.

6. Episodic Review is a Hard yet Interesting Adjustment

So the Winter Games is basically an episodic venture for me, and it was a seriously tough thing to do. I was following four shows last Winter 2018. Three for the Games and one for my collab with Keiko, and the entire thing just overwhelmed me. My problems aren’t about the usual thing like finding it tough to talk about an episode. I can push out 4000 words in just the Games alone, and I nitpick a lot of stuff for the collab with Keiko. I can never run of out things to say in an episode. My problem is the easier stuff, like trying to stay on schedule. Several times, I’d realize the new episode of the anime is already out and I wasn’t able to watch it on time. Keiko would often remind me that it airs on this day, but I just cannot remember it. With four shows airing on a different date, I often have a hard time watching it as it is released. I would pile them up, but that’s also not a smart thing to do.

You have to understand. I marathon my anime, and I finish my engagement with the show in just a week or so. I would even finish one anime in just one day if it’s really good. I never really have to wait for episodes to come out, because I consume them in one go. I also don’t really want to try episodic viewing, because I know I just can’t really stand watching a show for a long time. Three months just to watch a subpar anime about Sanrio mascots? Get the f*ck out of here. It’s kinda why I wanted to collab it. If I know Leap is twisting in agony as well, then it’ll motivate me to continue. But yeah, remembering airing dates is a chore sometimes. It even sucks when you didn’t post about the previous episode and then the new one comes out, and then you just feel overwhelmed.  Speaking of which, Leap and I actually agreed that episodic posting also feels like homework. It’s like we’re back in school, and we need to do this or else we’re in trouble.

Episodic reviews seriously burned me out, because everything kinda piles up. If you have a stressful job and anime is your escape, then episodic reviews kinda sucks the fun out of the hobby. For the Winter Games, we sadly chose two “meh” anime and one show where the appeal is “girl will eat food and make cute faces”. After a hard week of worrying about personal stuff, it seriously sucks to suddenly be forced to write about a show with horrible pacing and one with absolutely zero effort given into it. It came to a point where the four of us didn’t really discuss the episodes that much, because we got sick of thinking about them. 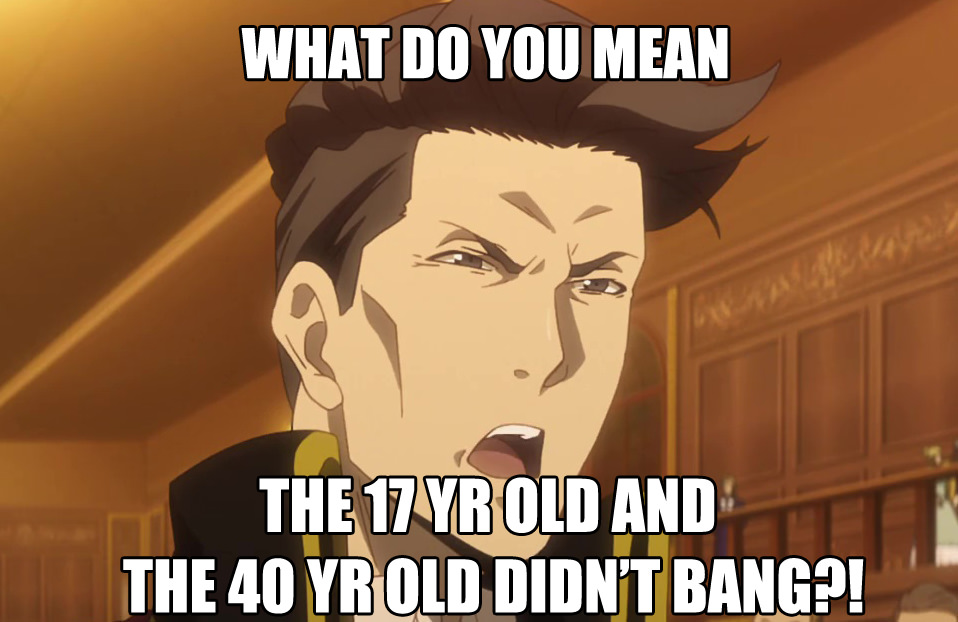 But, despite the unpleasant experience I had with my first episodic viewing, I actually wanted more. While the Winter Games felt like homework, the “In Conversation” I had with Keiko felt awesome. The anime is so good as it follows an age gap romance with a lot of subtle details to it. Every week, Keiko and I would argue that the two will finally kiss and close that gap. Every week, I’d come up with weird conspiracy theories, stupid predictions and explore “what ifs” and Keiko would expand on each stupid thing I mention. We had a running joke about my (age gap romance) train finally leaving the station, and Keiko would shut it down each time. I personally didn’t really want romance in After The Rain, but it just felt like a fun stance to have. And then it finally dawned on me, this is why we do episodic reviews. We share the experience with other people.

That was always the theory I had with episodic viewing, but I never really bought it myself. That’s why, when I wanted to try it, I wanted others to try it as well. The experience is incredible. While marathon viewing is about you and the anime, weekly viewing is about you and other people (preferably a friend) and the anime. As you talk about the episode, you hype each other up and you immediately wanted to know more about the story. I swear to gawd, when After The Rain started to make the two characters find strength in each other, I was like “oh my gawd, our theory was right. I can’t wait to tell Keiko about it.”

Now, don’t get me wrong, the Winter Games had the same effect. Leap and I kinda slowly hated each other for doing the collab but we also never really found a reason to stop. Reading Irina’s post of trying to entertain herself with Sanrio Boys, by not really focusing on the awful show and instead doing a “this guy is a murderer” angle, is pretty hilarious. Reading how much we were concerned that the girls of Yuru Camp are eating too much also felt hilarious, as well reading how much AstralGemini gush about the show itself. He could not find fault in the anime. It’s awesome. Of course, Seeing Leap give Sanrio Boys a chance each week only to give up later on is also fun to read. We were sharing this experience, and that’s why when I proposed a Fall Games 2018, no one declined. Not really sure if it’ll happen but I’ll be watching some Fall anime either way.

So, yeah, I’m not really a fan of episodic viewing but I am now a convert. I love watching weekly while I marathon my reviews. It was a hard adjustment for me, but I’m glad I tried it six years into TPAB’s existence.

20 thoughts on “TPAB’s Top Ten: Things I Learned From Six Years of Blogging and Reviewing (Part 6 of 10)”