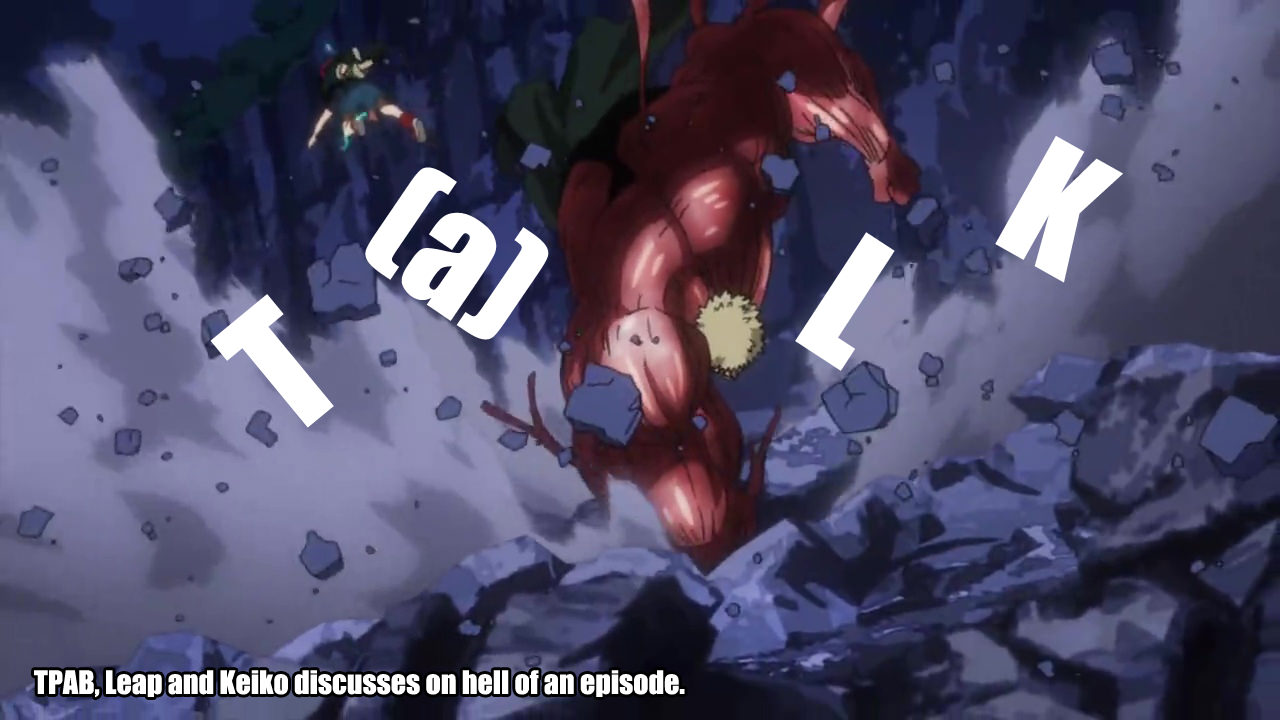 Editing these conversations hurt. I don’t know how Keiko did it back when we were talking about After the Rain. I’m just really glad I have a good show here. Poor cakes have one of the worst shows to edit and host in her blog. Thank gawd, I chose smartly and lazily, lol.

TPAB: the pay off episode, lol

Keiko: That’s a good way to put it lol

Leap250: that fight was as sweet as I remember it

TPAB: is it as fast in the manga??

Keiko: I love how the fight wasn’t that long but packed quite the punch

TPAB: come to think of it, are there any long dragging fights in the manga, later or so

TPAB: so nothing like in Naruto, for example, or One Piece

Keiko: Yeah he had given up at one point

Leap250: this is also where the story kinda subtly explains to you how limitless One For All actually is, as opposed to just something that maxes at the limit of a 100%

Keiko: He was apologizing to everyone and his eyes went blank. I honestly thought that was it for him

Keiko: That’s true. It has more potential than just 100%. 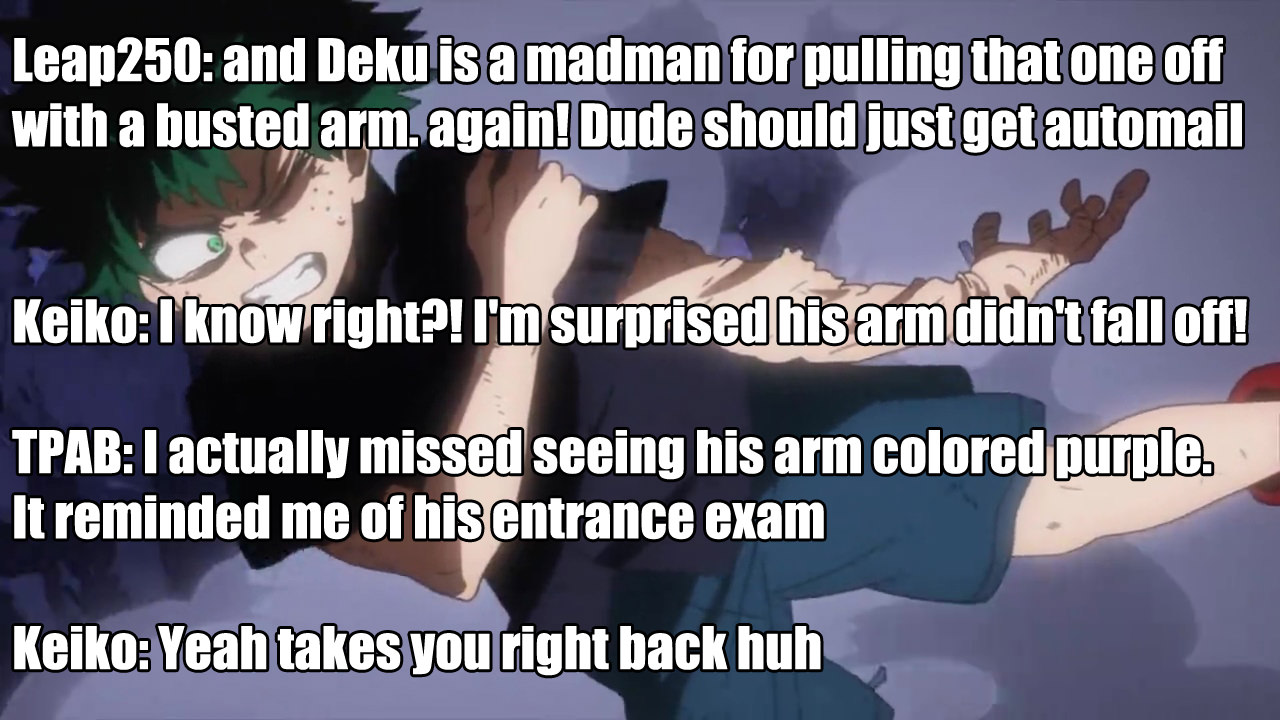 Leap250: at least he didn’t blast his legs this time. I wish he’d use em more huh

Keiko: True he realized he needed his legs to run from place to place

TPAB: will muscle guy return? Rematch in the future maybe??

TPAB: seriously? aww man. i like him and his freaky powers

Keiko: Ohh I’m gonna miss him. His power was something

Leap250: augmenting quirks are the best in this universe, lol. The simple stuff like “being strong”

TPAB: better than the nomus, tbh

Leap250: even all might is just a flying brick

Keiko: Hahah yeah he is. I like that simplicity of it

Leap250: as far as enemies are concerned, well. There are more neat ones to come yep xD

TPAB: this one guy is already awesome, so I can’t wait for the rest

Keiko: Oooooo 😮 I’m excited to see them!! That’s true. These villains are good! 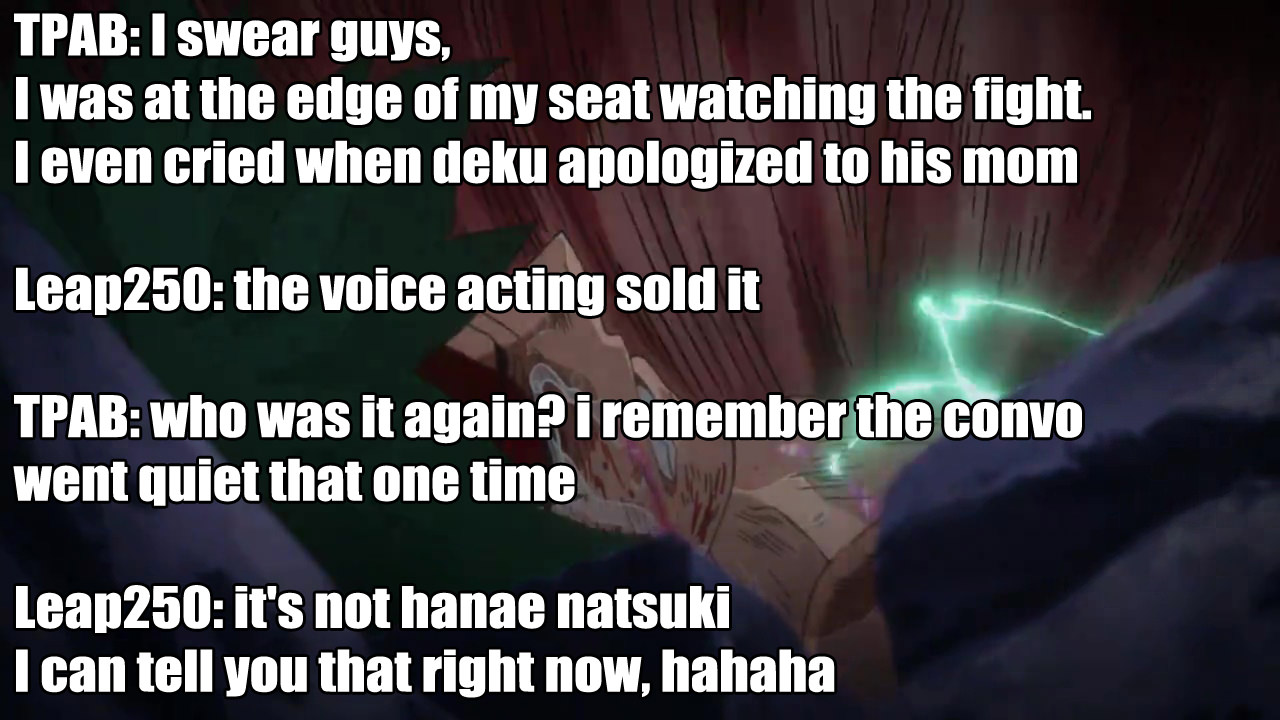 Leap250: man, it must be tough being Deku’s mom having to go through all this every other day xD

Keiko: I know right? I feel sorry for her. Must suck to be the mother of a hero 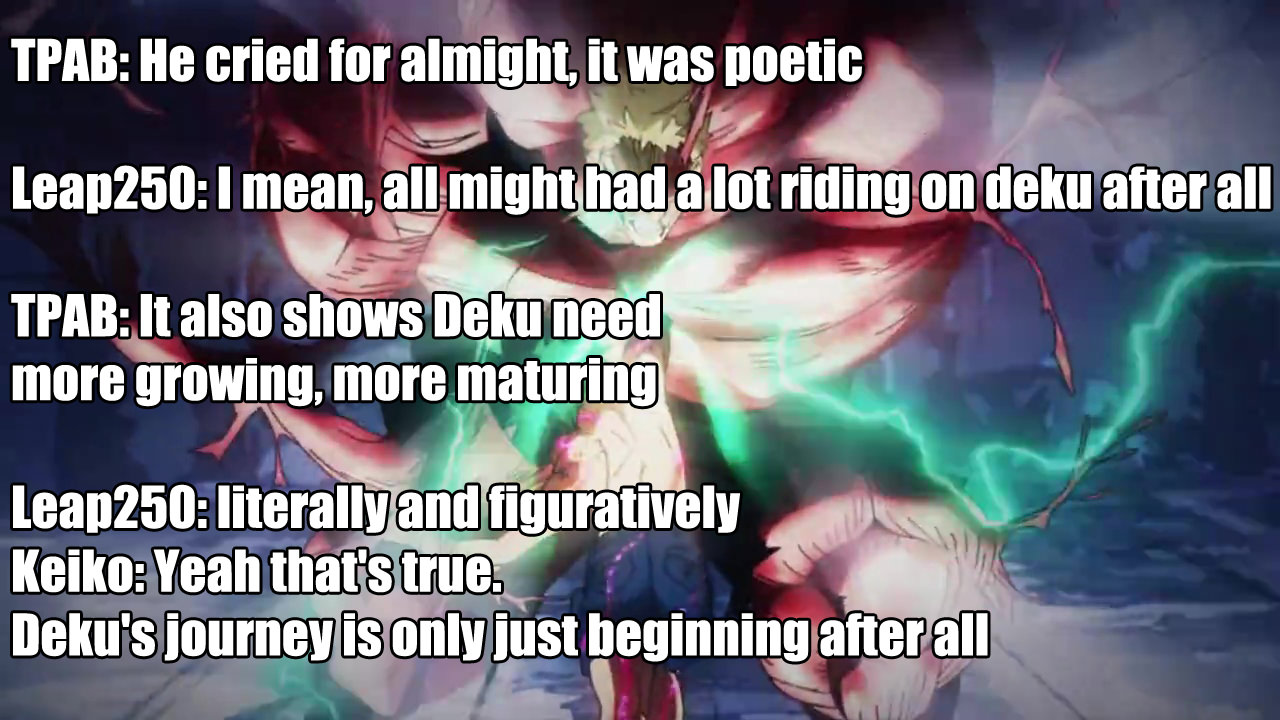 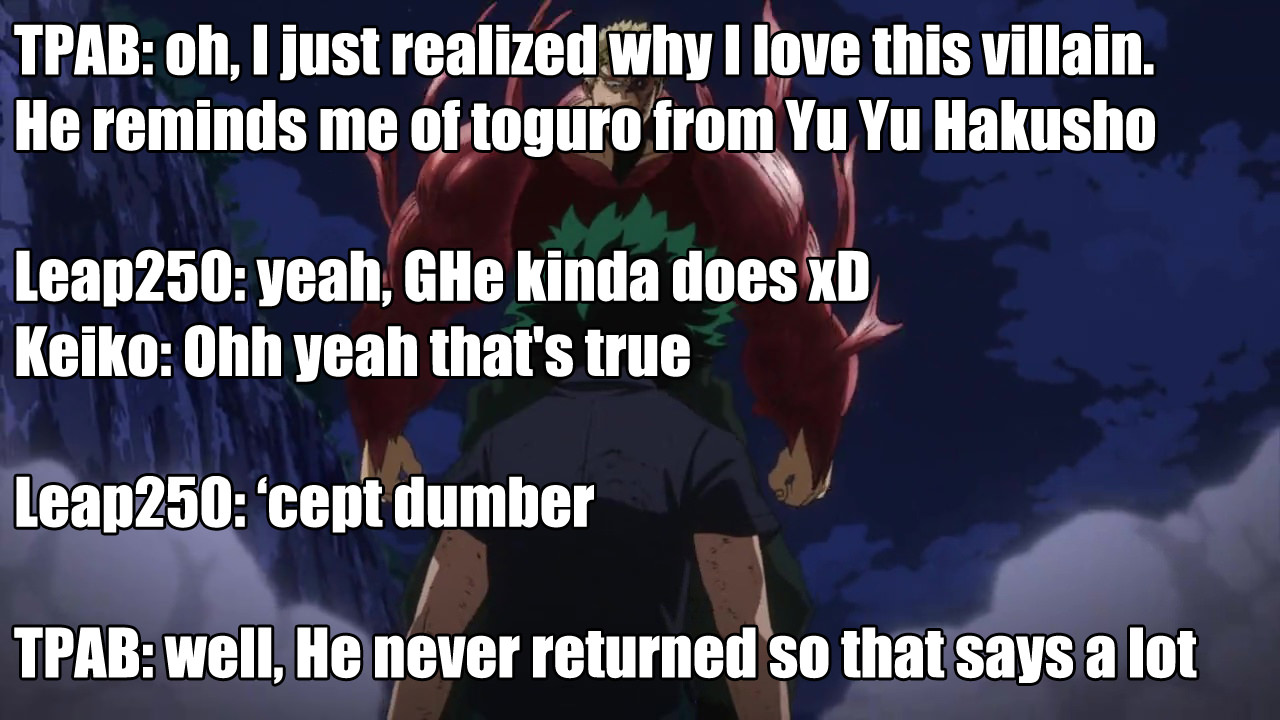 TPAB: Deku got tougher though, since he lasted longer than expected.

Keiko: Yeah he did. I think his strength comes from wanting to protect people so because he had someone to protect, he was able to keep going

Leap250: That makes him both a good and bad hero really, right now at least

TPAB: his previous fights are not as hopeless as this one though, even if you knew he’d win it. And yeah, he’s flawed in a good way

Keiko: That’s true. It works as a double edges sword for now but it suits him because of the way he is

TPAB: yeah, makes you want to root for him harder

TPAB: the anime really knows how to make us care, it’s amazing. I still hate Kota though

Keiko: Hahah Kota was a nice reason for this fight at least. He isn’t all that bad

Leap250: Kota used Water Gun. And it was Sooo not effective

TPAB: he did save Deku though

Keiko: True. It was effective at waking Deku up and putting him back into action though

Leap250: it was more him realizing, oh hey the kid has a quirk and he’s using it now, but yeah. Still funny the way he just splashed muscular hoping for something xD

Keiko: Hahaha true lol it was pretty ineffective but he is just a kid lol

TPAB: his presence in the fight was kinda needed, since it’s another factor for Deku’s hopeless situation. When Deku’s arm broke protecting the kid, I kinda knew something awesome will happen, and yay, i love this episode 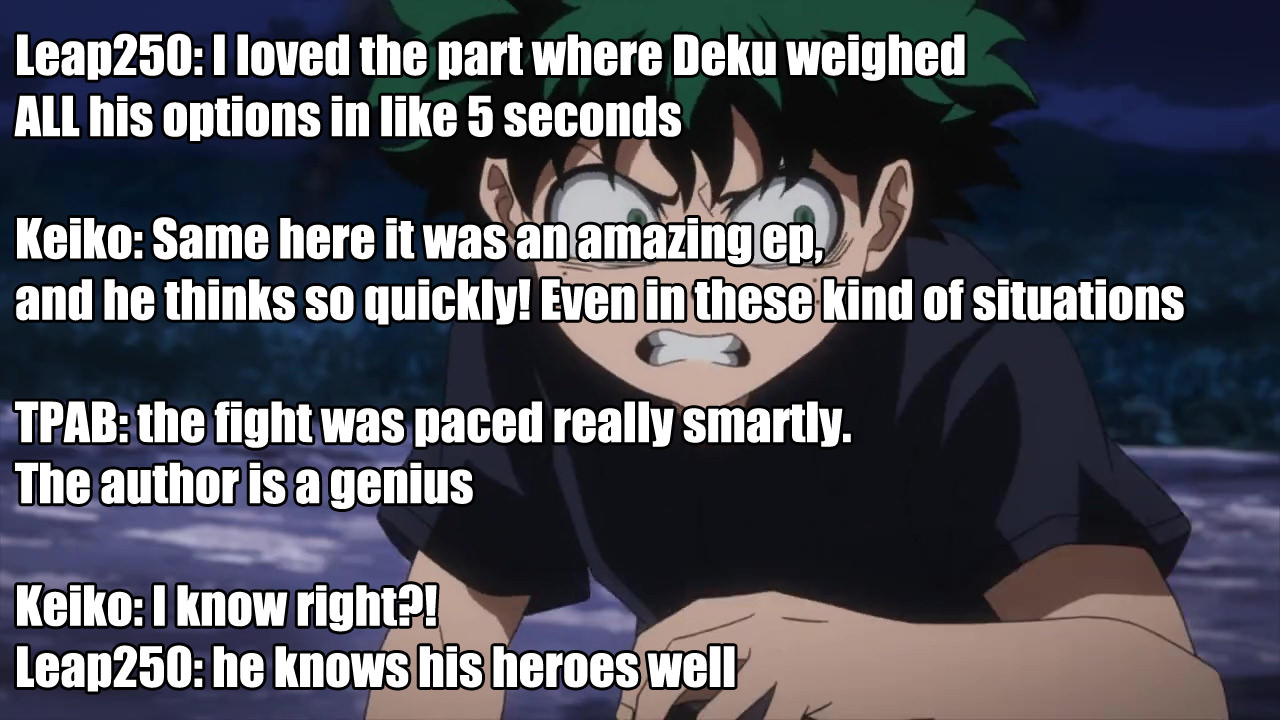 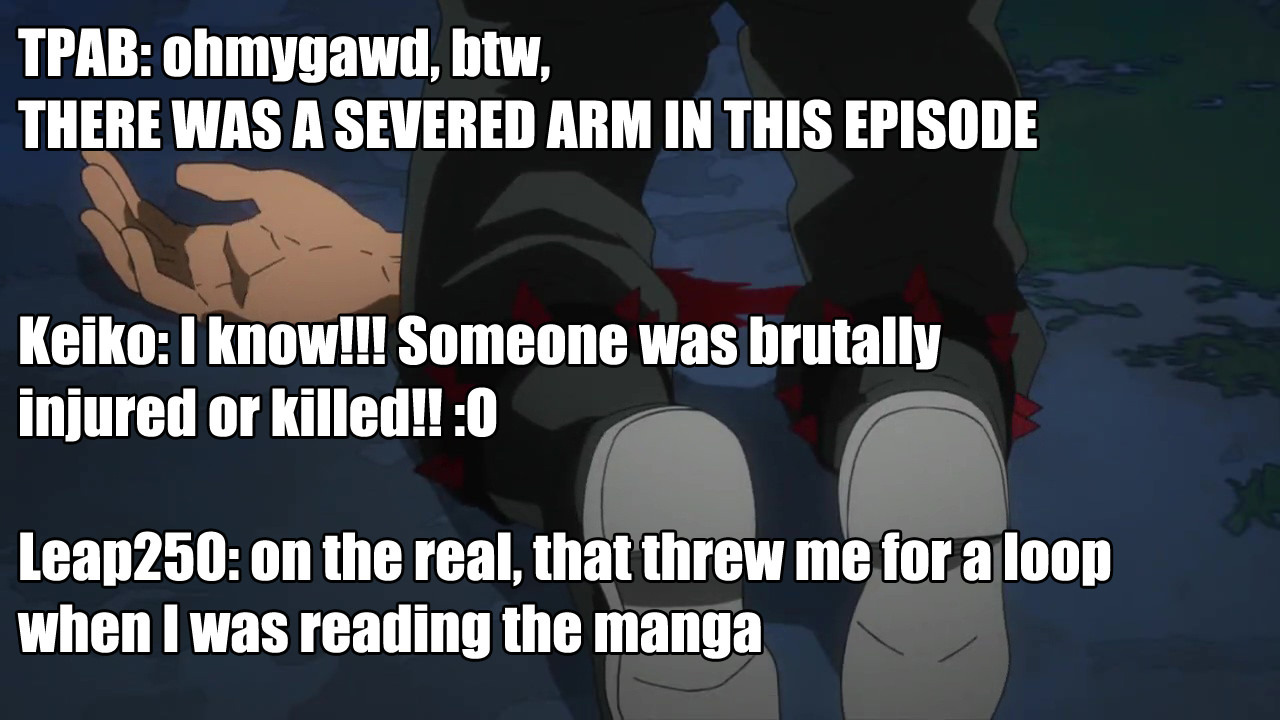 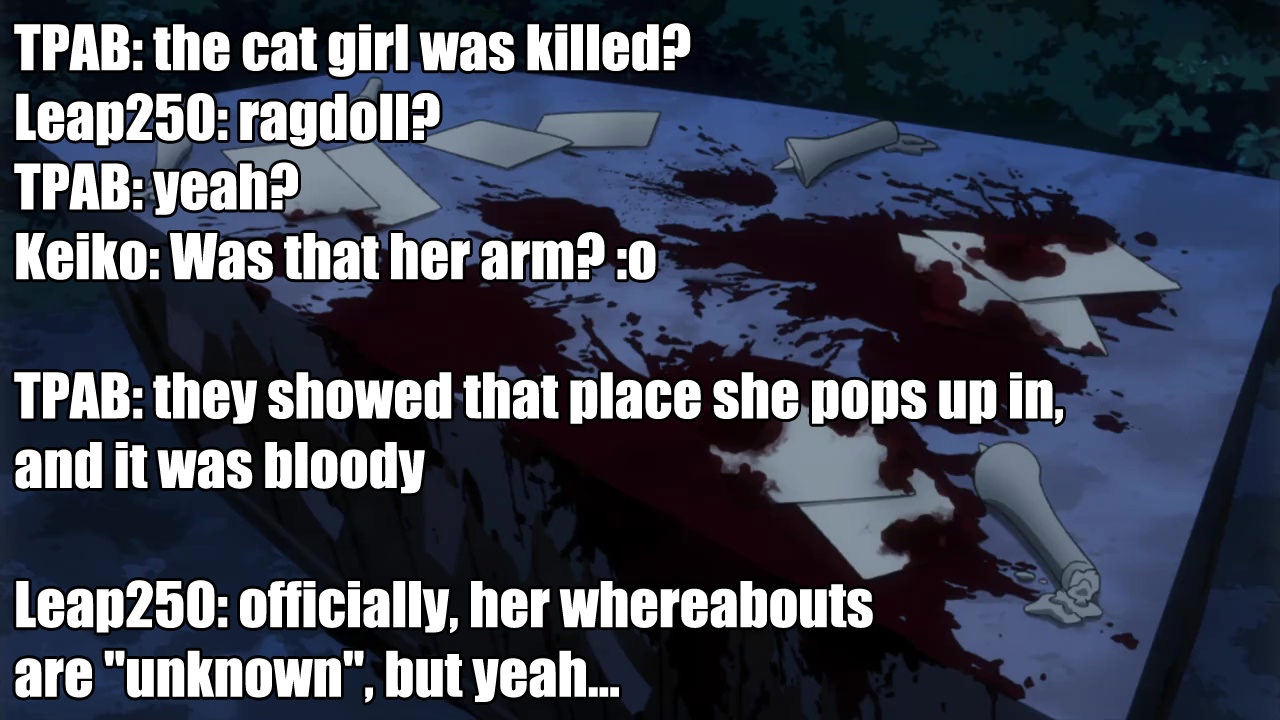 TPAB: omg, they killed her off. She was eaten?!

Keiko: 😮 she could still be alive but severely injured 😮

TPAB: is her “whereabouts” a big part of the succeeding story?

Leap250: they wouldn’t introduce her without reason yep

Keiko: Oh wow 😮 I want to know where she went now!

Leap250: sorta xD It should come to light after this whole fiasco with the camp. Speaking of which, poor pixie bob 😦

Leap250: got absolutely smashed by an otherwise OP quirk. Pixie bob would’ve been a huge help here with her earth golems after all. It makes sense why they took her out first.

Keiko: True. By taking her out, they avoided distractions really

Leap250: Magne is also pretty ridiculous. His quirk is polarity if I’m remembering correctly, not strictly magnetism, so he makes anything “magnetic” 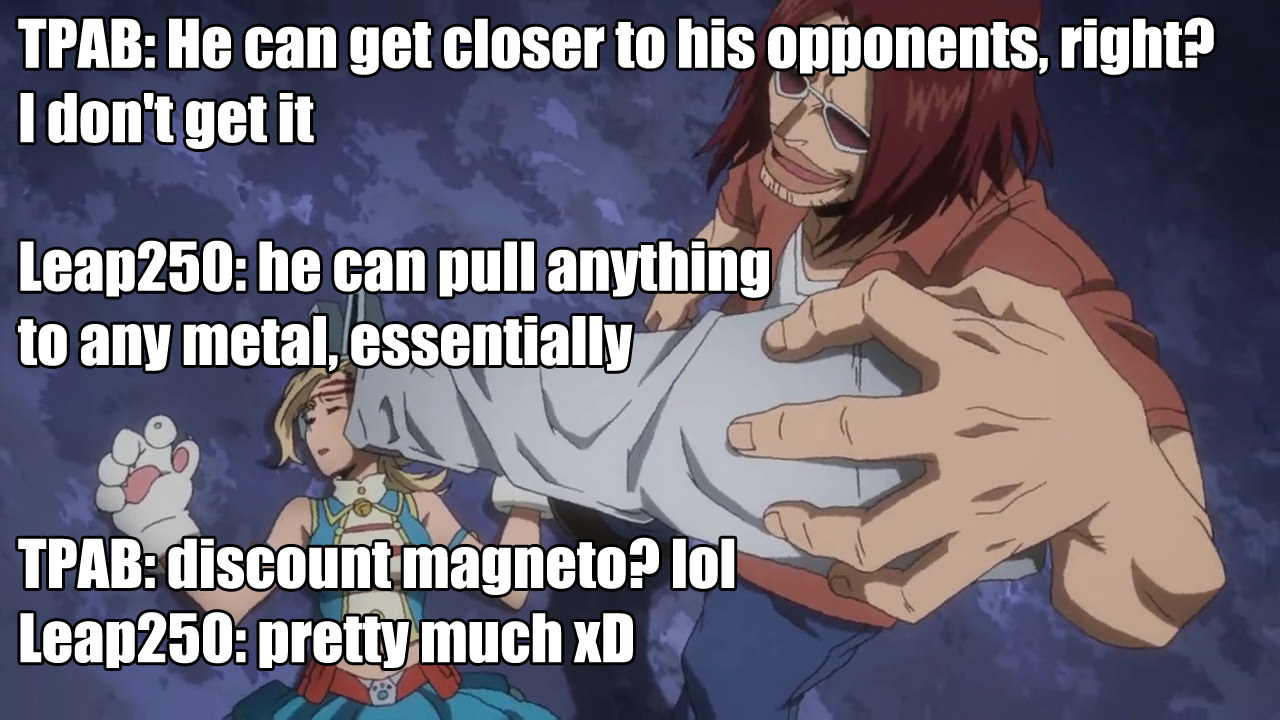 TPAB: wait, why did he have trouble getting to his weapon when he fought in ep 5?

Leap250: he can’t pull metal himself. He has to attract things to his metal

Keiko: Right so unless he has metal on him he can’t pull anything to himself

TPAB: why not have metal on him then? like a necklace? stupid guy. I’ve seen the power to turn towel into steel become scary effective, lol 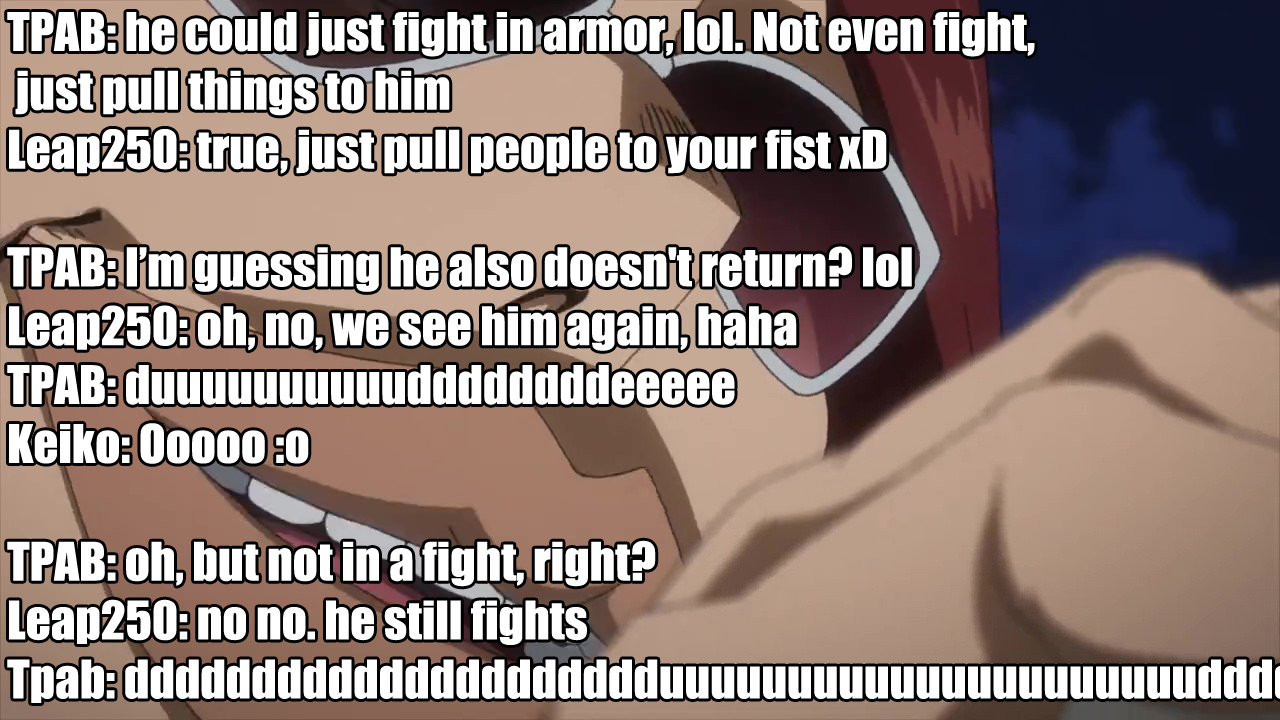 Keiko: Is he better then? TPAB is getting really excited hahaha

Leap250: same, sadly, but really there’s no getting better with the guy

Keiko: Hahahaha yeah I’d rather have muscle guy return than him!

Leap250: there’s perfectly sound reason as to why

TPAB: there better be

Leap250: I mean, at least I can say Stain fanboy won’t be back

Keiko: Yeah, I don’t want him there for no reason 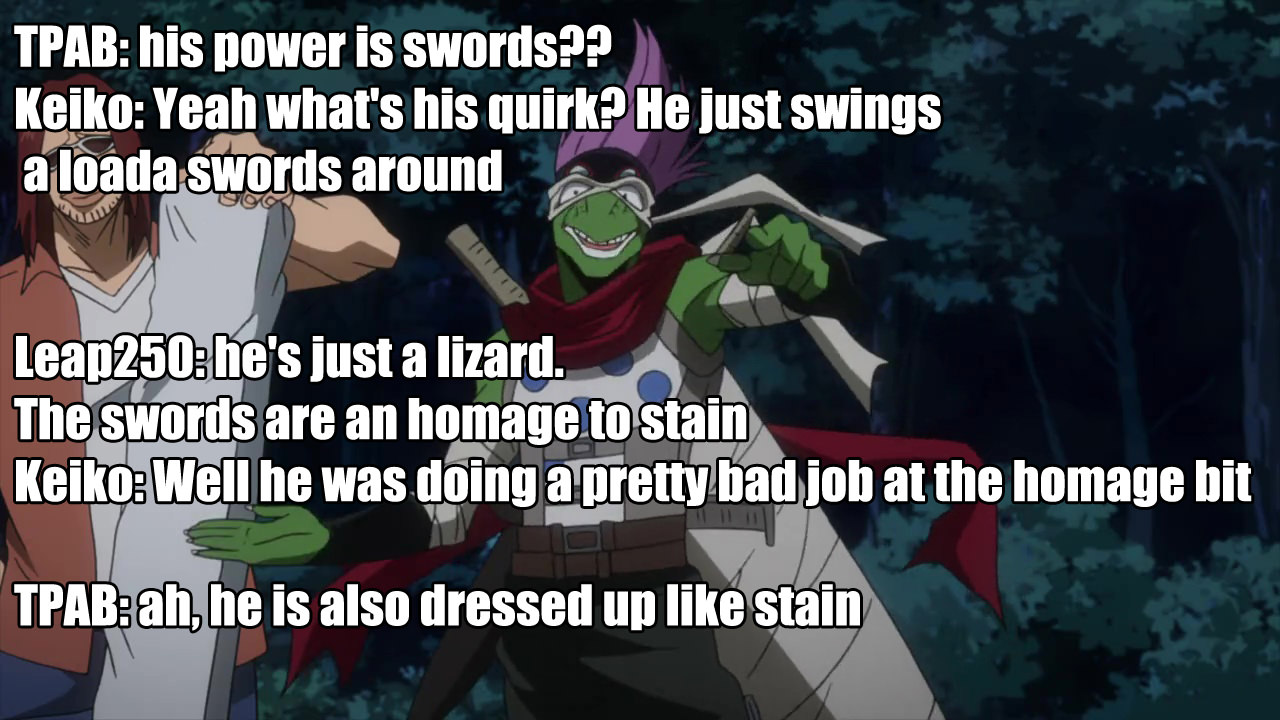 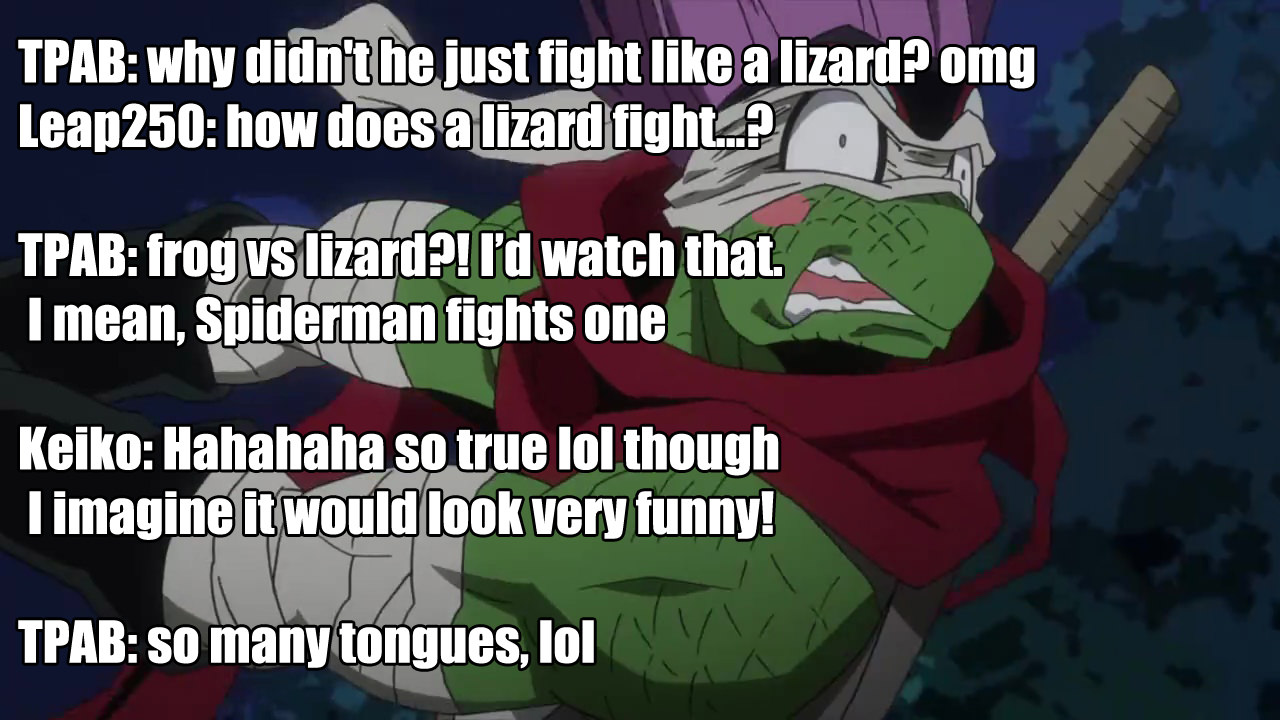 Leap250: Asui goes against someone else though. Or at least, we see her and Uraraka come across somebody

TPAB: It was slightly seen in ep 5

Keiko: Yeah is this his whole arc?

TPAB: lol, I only cry when deku is getting beaten up, or shirtless 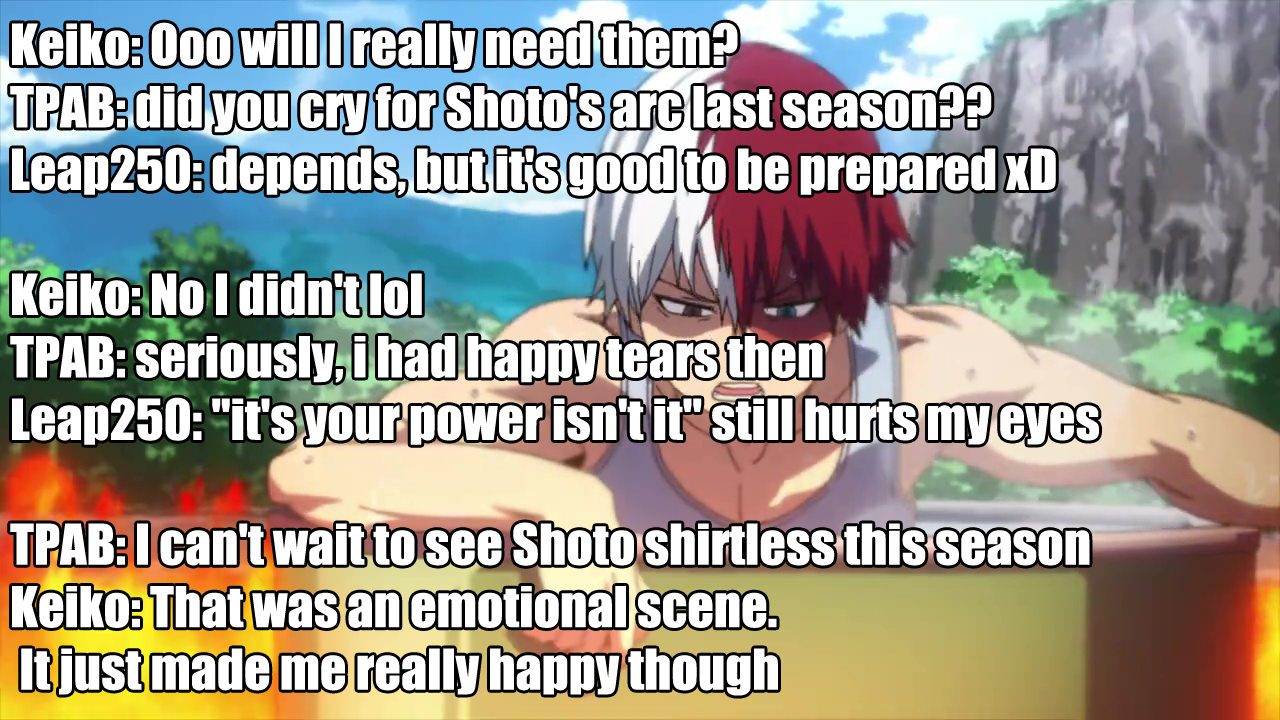 Leap250: haha, as always, I’m excited for what’s in store for you guys. ratings shall we?

TPAB: I replayed this episode five times throughout the week, lol

Here’s a funny thing about our time zones. At any given time, it’d be morning/afternoon/evening for any of us. One of us will inevitably sacrifice their time, and I’m really glad my collaborators are cool with it. Life is harsh though, so our schedule never really align the way we want it. It’s a fun learning experience though, so I do hope you guys enjoy it. We literally burn midnight oil for this sh*t, and it is as fun as it is exhausting.