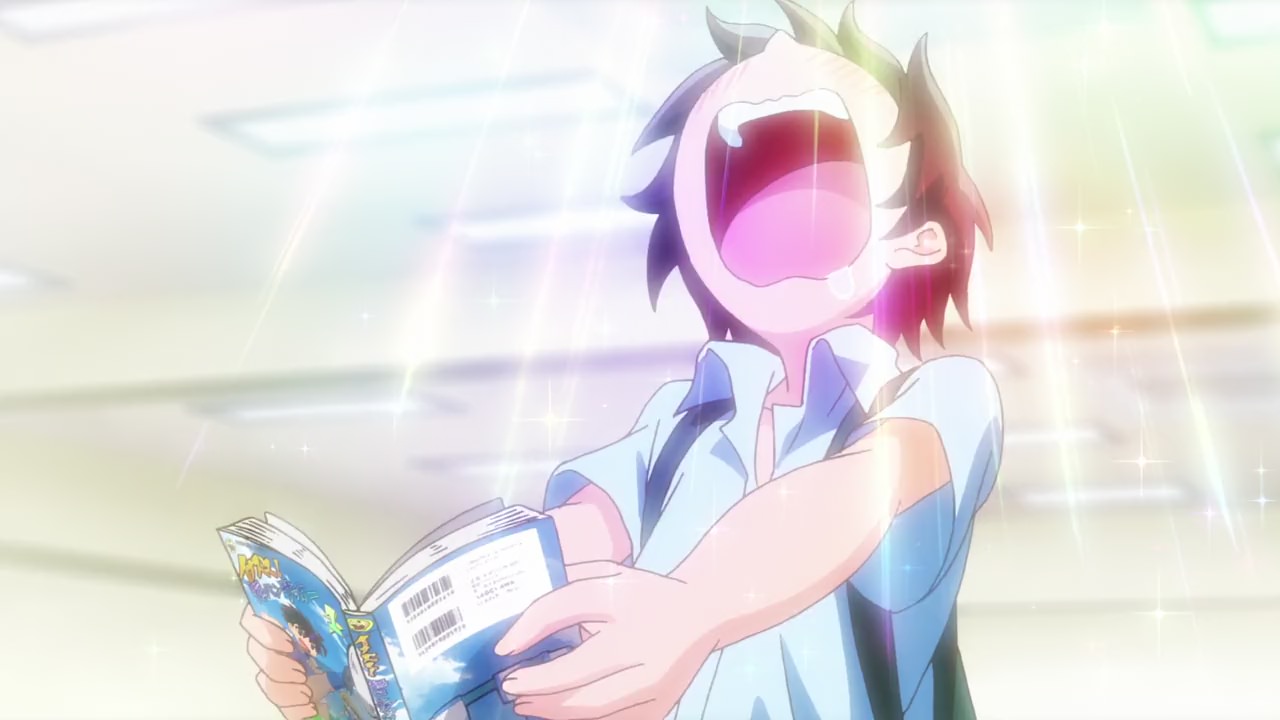 I forgot to publish this, lol. It was sitting around in my laptop all this time. March has come and gone, and April is almost over. Hey, it’s the perfect time for a wrap up. March is a pretty decent month, I guess. The Winter Games came to a close, and I reviewed two anime. I burned out hard, lol. Hpopefull the rest of April will be more productive. Now, onto the best moments!!!

Ushinawareta Mirai wo Motomete- She died 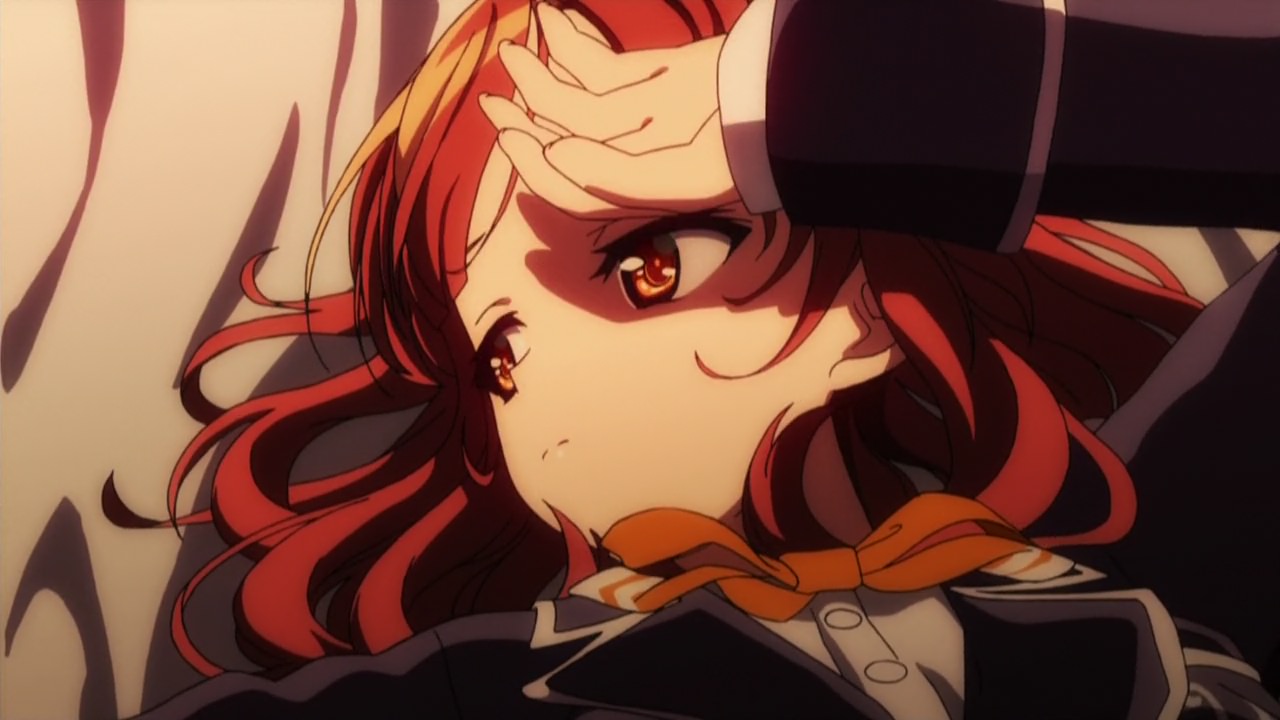 Is there really a moment that deserves to be talked about from this anime? From the convoluted story to the horrible animation, I would rather just let this one die. I guess I’m going to put this one in the honorable mention as well. For a moment that is even worth mentioning from this anime, I guess Kaori’s death is notable. It’s not good, and it was stupid, but it did make me want to see more of the show. The death scene looks avoidable though, and it’s weird that she is the only one at that time waiting for the bus. I mean, she fell down and her injury hurt, and then the bus killed her. She could’ve rolled to the side, and maybe leap from away from danger. She has every opportunity to do so, but nope, she died. It was a weird moment, but it did establish the plot. I’m sure her death scene is a lot better in the visual novel, because the animation did not do it justice. 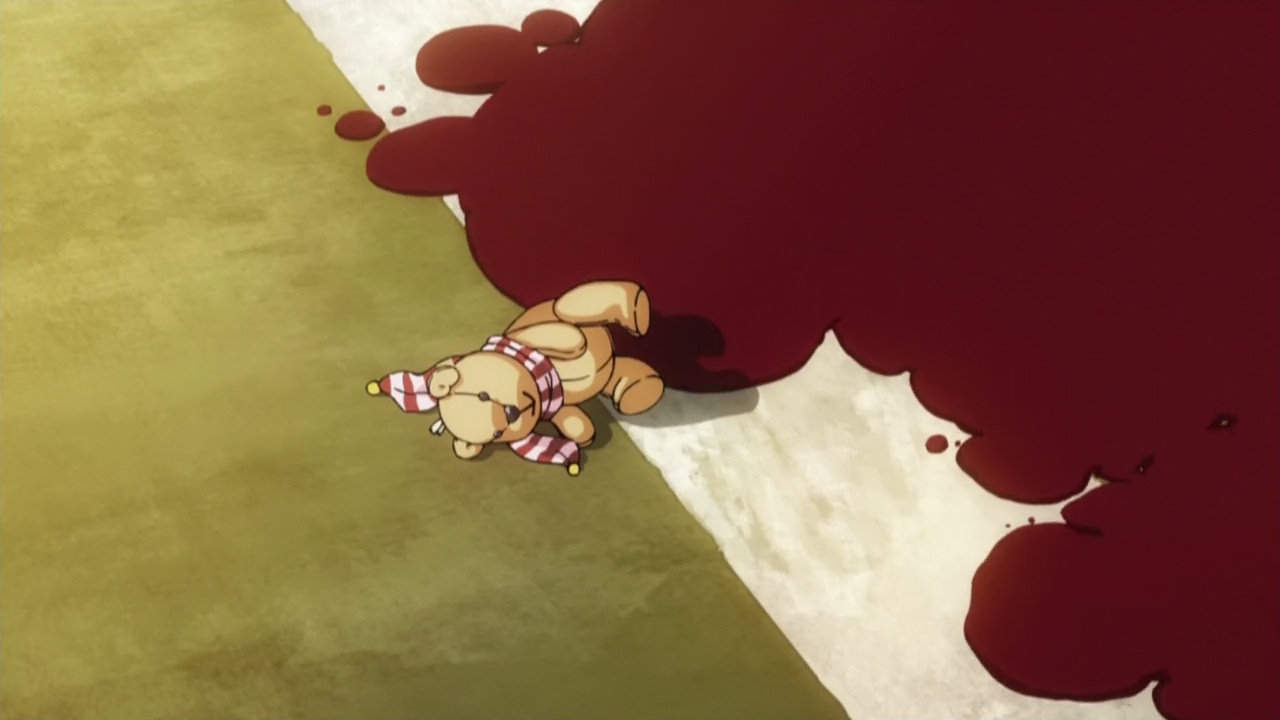 Her death is also notable, because it created a convoluted storyline where the characters were not given a chance to cope her loss. Instead, they just really want her to be alive again. Being in a vegetative state is pretty sad, but it could’ve been a great chance to have a story about letting go and moving on with your life. I hope it’s, at least, a bad end in the game because it’s a logical progression for this kind of anime. After all, the b*tch is no Mayuri. Tuturu~ 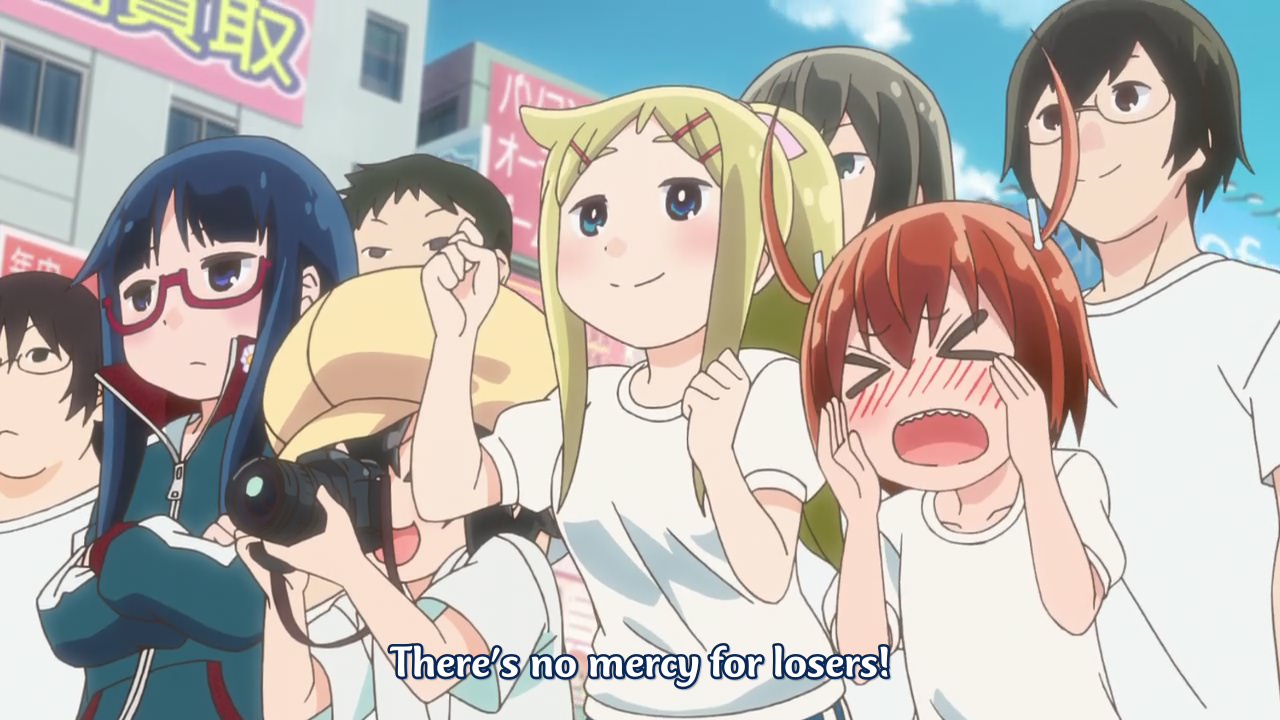 This is one of the best episodes of Denki gai, and it actually highlights all the great elements of the show coming together to deliver one hell of an experience. The characters, the comedy, the reference to the culture, and even some dab of the romance are all featured here. It’s also curious to see something this good in the second episode, but it just shows how much confident the staff had with what they’re giving us. After all, a summer event is usually done in the middle episodes and not in the earlier parts. I think this also indicated that the show was willing to transform to suit the characters, and I like that a lot since the characters really made this anime special. Anyways, the summer event is a festival where teams battle for supremacy. I think the prize is a year supply of Soba noodles, but it was mostly for the competing stores of Electric City to prove who the best is. Naturally, being a random and stupid show, the games have a special flavor to them. 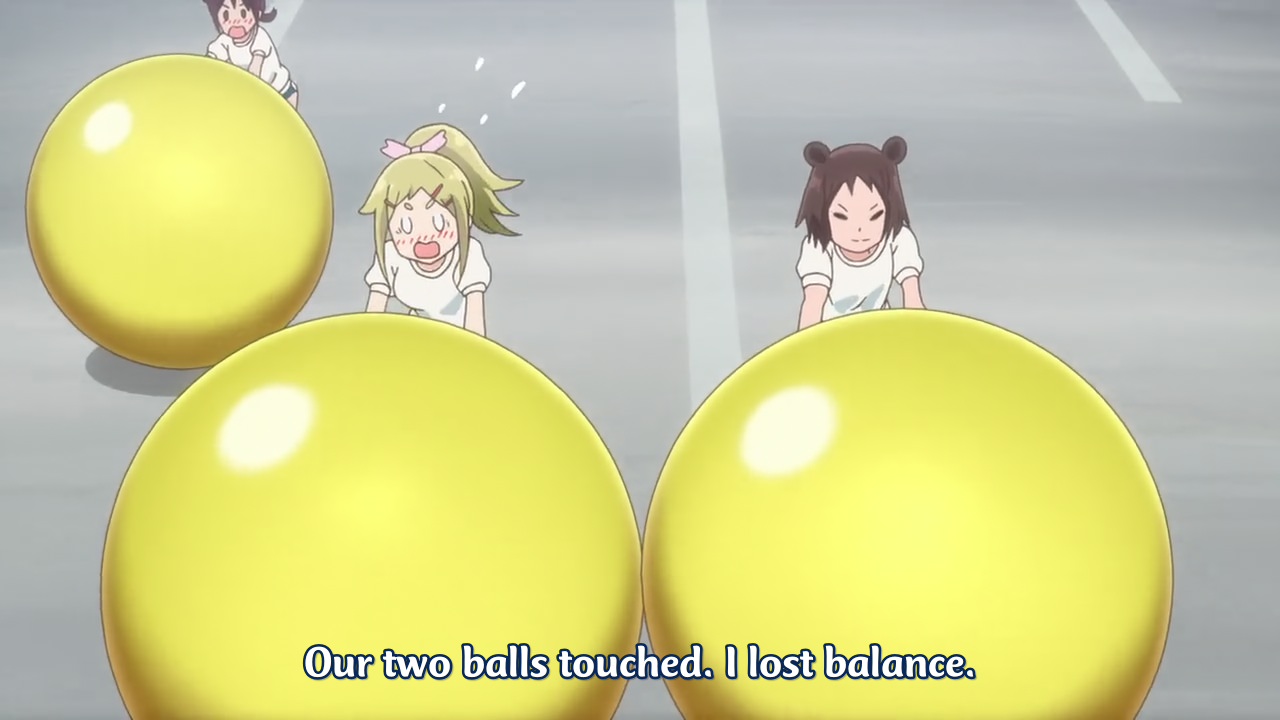 We have the Panties Race, the Golden Ball Rolling, the Waifu Carrying Race, a tug of war featuring a tuna, and a capture the flag game with water guns. Every game is funny in its own right, and it features the characters at their best. We have Hio freaking out at the sight of a giant ball, we Umio also freaking out at the sight of other people’s waifu, and we have Fugal shouting profanities while looking cute as f*ck. The jokes range from filthy to random to really adorable ones while strongly featuring the amazing characters. My favorite part is the water gun battle where things took a weird turn and Sommelier is forced to protect his OTP by shielding her. Everything leading up to the hug is pretty fun as well, like the Director wearing speedos that shows off his bulge, the characters freaking out that they have to wear swimsuits and the sight of Hio being ganged up on by a bunch of half-naked nudes. The jokes in the second episode are really strong, but the sight of romance slowly creeping up to replace the show’s strongest element is probably the best thing about this moment. Seeing Sommelier and zombie girl share a moment together to close the episode is a very high note to end a very amazing episode.

This show boasts amazing pairings, and every couple shared some amazing moments together. I’m sure their relationship grew after the anime ended, because there was just an impressive progression the more we see the couples interact. What starts out with awkward silence between two people develops into something more adorable. I’m not sure how far the story will take it, but I just love how pairings actually making traction in shows like these. Marshmallow anime, in particular, doesn’t really take romance seriously. While pairings do exist, most shows do not treat them kindly like Denki gai. I have no favorite couple in this anime, because I really like them all. The wonderful part is that multiple characters would fall for one guy, so a love triangle is established. I think we got a square in one of the pairings, and you never really wish badly towards the other characters muscling their way into the pairing. The show has done a great character presentation that all of them rocks and all of them should be happy at the end. 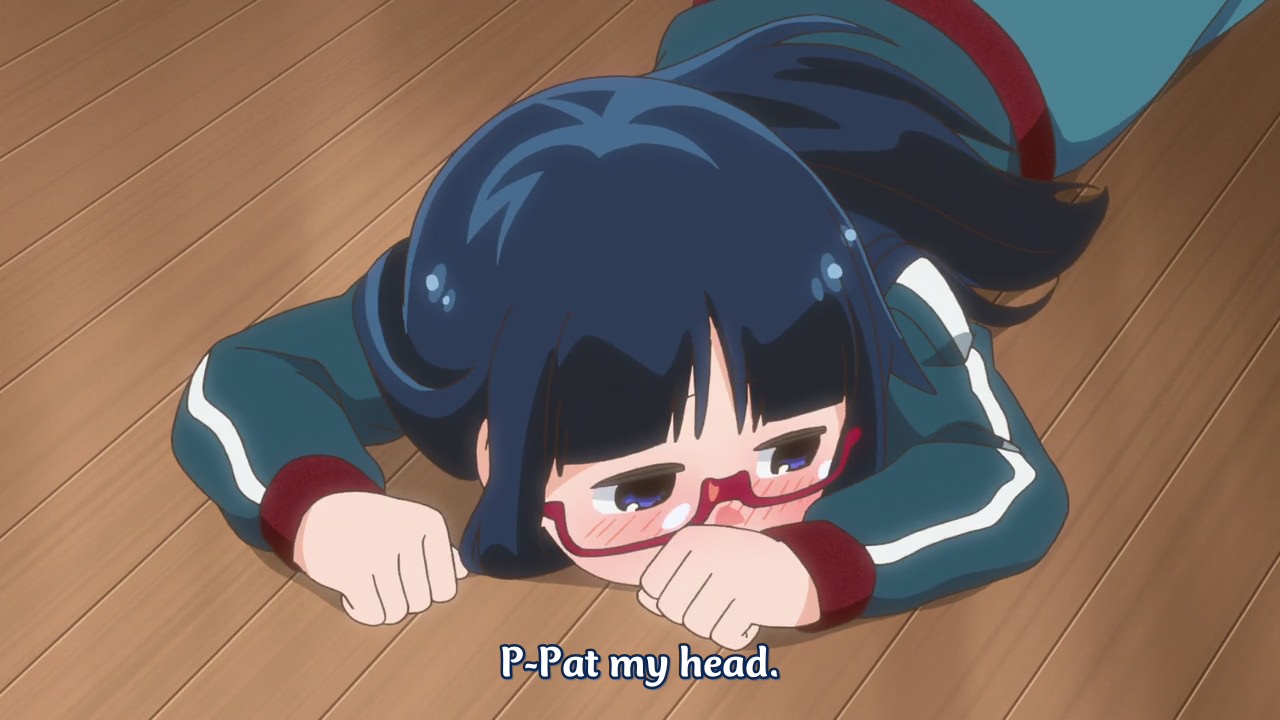 I like the main couple. Master and Umio are straight up cute together, and I love how they just naturally developed a relationship overtime. I still remember their awkward train ride, and it makes me smile that the girl is soon asking to rest her head on the guy’s lap at the end of the series. 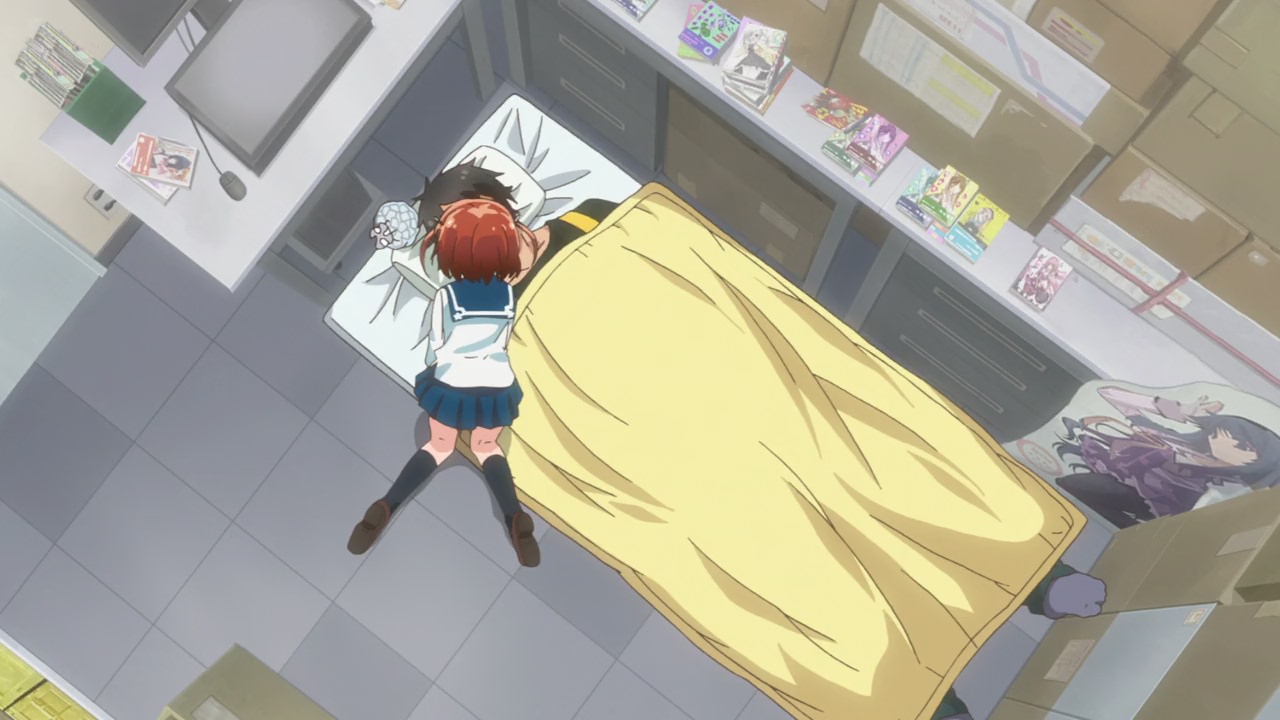 While not really a big favorite of mine, I also like Sommelier and zombie girl’s pairing. The tall and muscular guy being paired with the timid loli girl just looks cute. Their personality seemingly compliments each other, and I love how unique the pairing is. These two characters don’t talk much. Sommelier doesn’t talk at all, but you still can’t help but smile seeing the two spend time together. I’m mostly not a fan of the pairing though, because I root for the other girl. 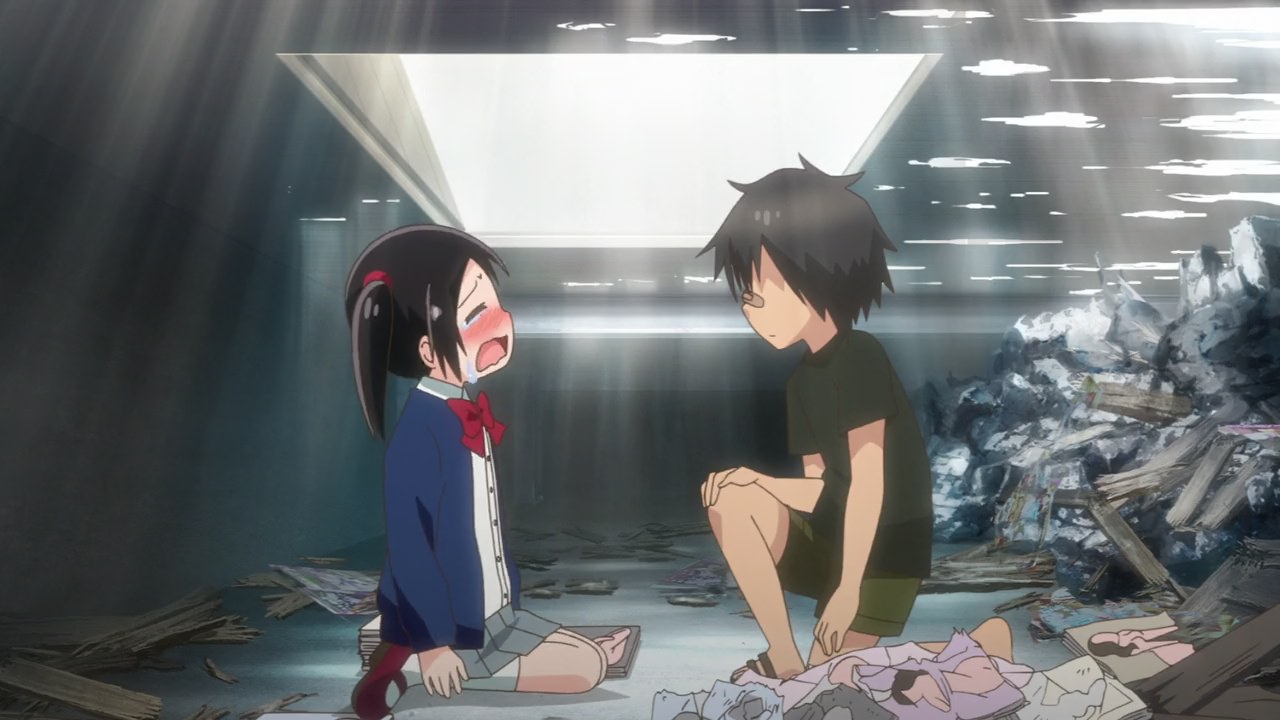 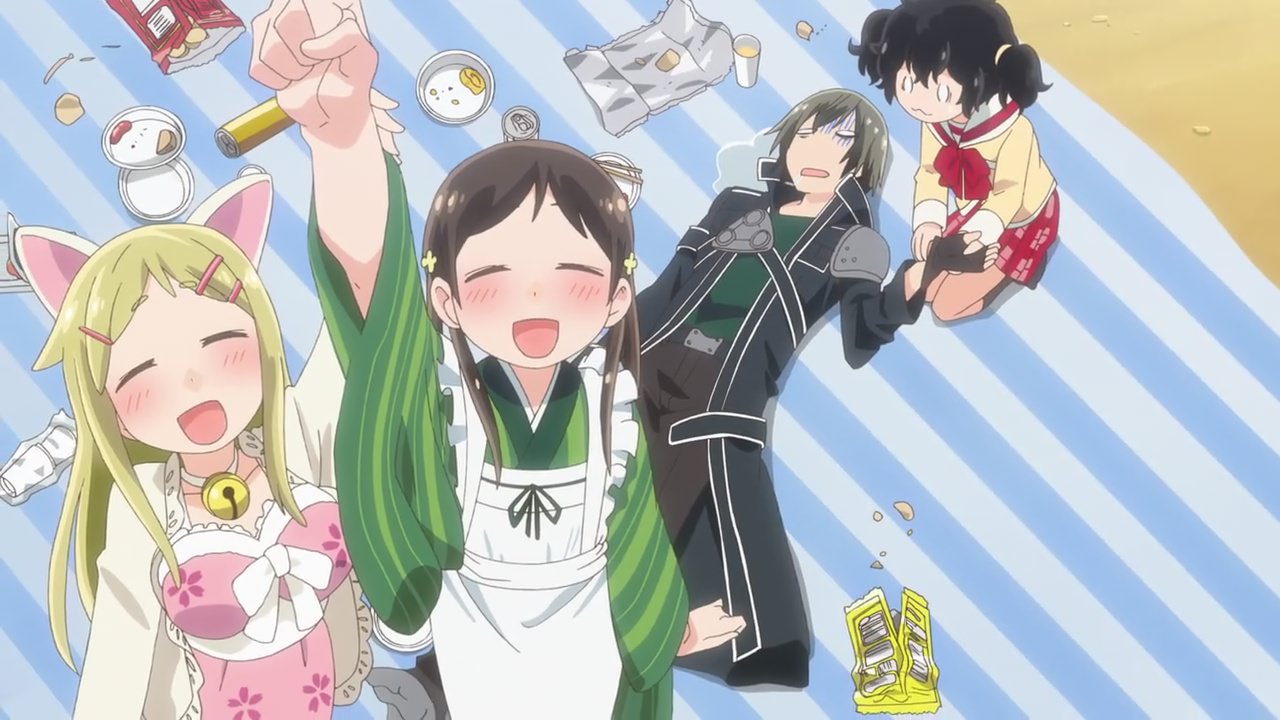 There’s also a wonderful three versus one story in this anime. As we soon discover that Director is really friendly to girls, a bunch of them starts to like him. He’s a very accommodating guy, and he says the right words at all times, so it’s not really surprising to see a bunch of girls after him. He has a good thing with Hio though, but he has a past with another character and he’s inadvertently urging another to confess to the guy she likes, who happens to be him. It’s a beautiful mess, and I love how the anime made me care.