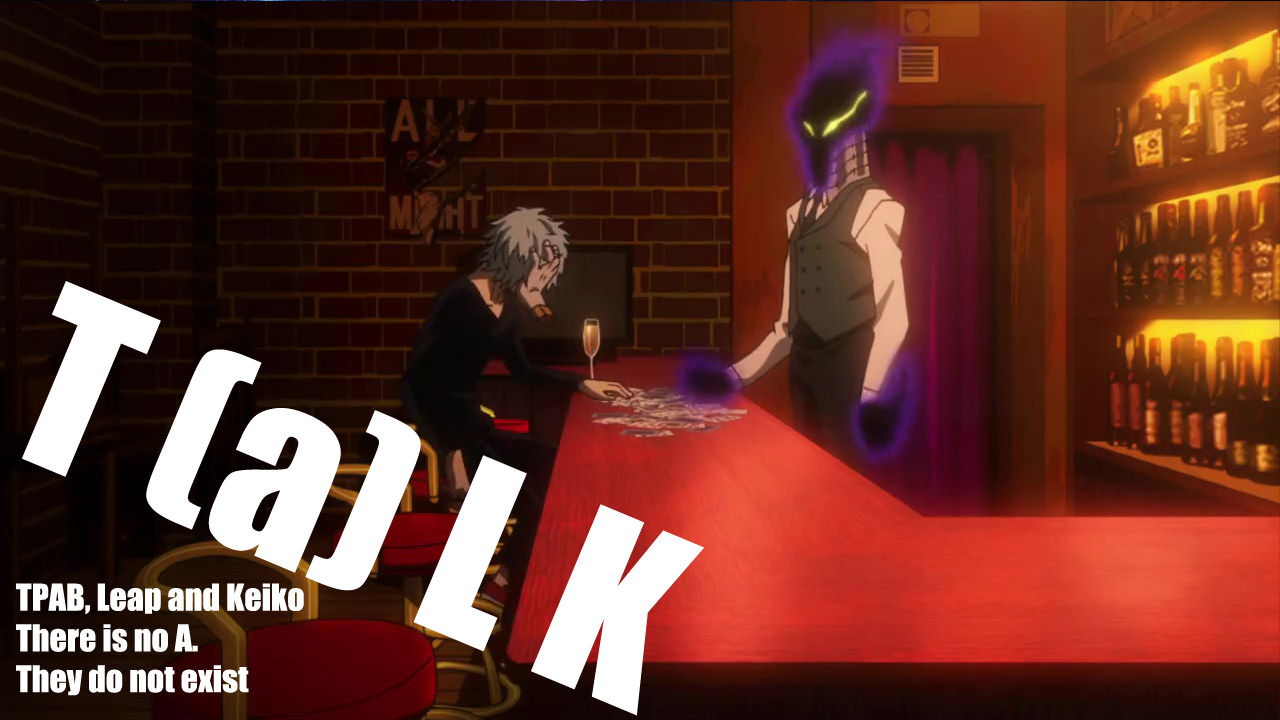 Another week has passed, and it’s now time for T[a]LK! This is a weekly collab between TPAB, Leap and Keiko sprawled all over our blog. In my section of the woods, we discuss My Hero Academia. The second episode features cosplay and my ability to not remember names. Let’s read on. 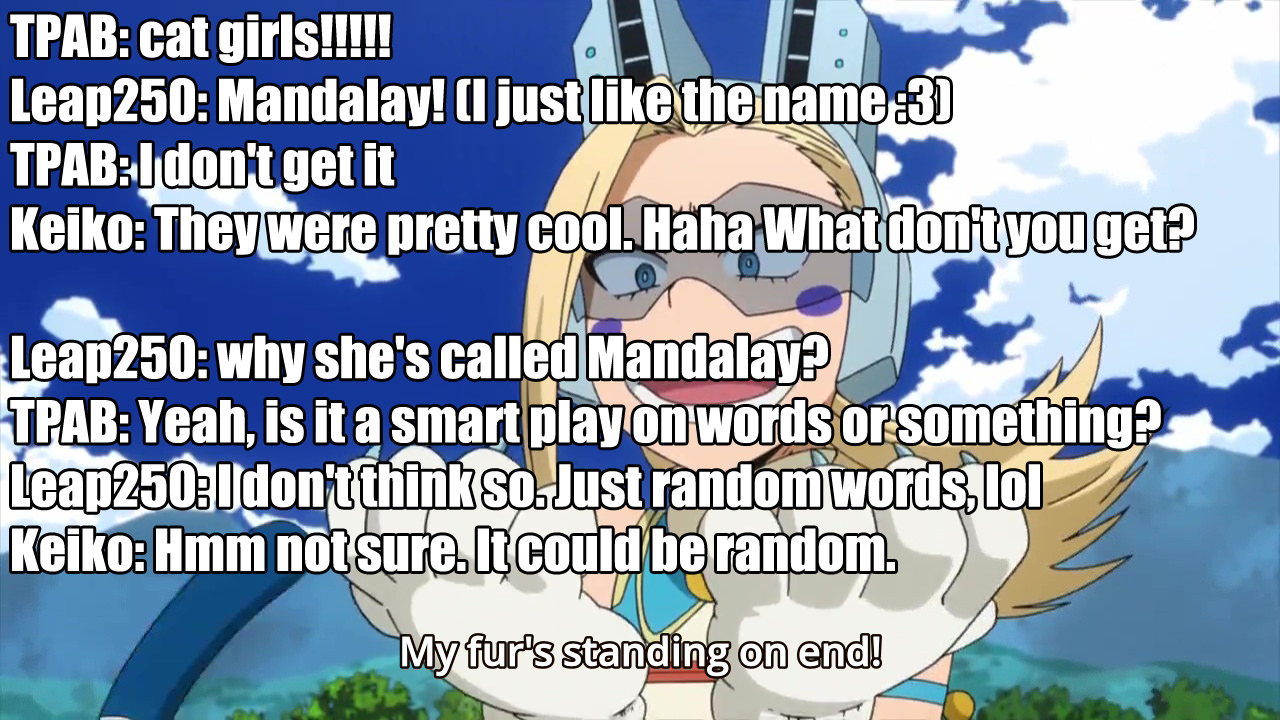 Keiko: I get what you mean. Not much happened because this was just getting things started.

Leap250: It was alright for me. Nice setup for the coming arc.

TPAB: it is ramping up for something big, but I guess I’m just impatient. I wanna see the villains now, lol

Keiko: Yeah I was pretty excited about this arc by the end of the episode. Lol who doesn’t? The villains look so cool as well.

TPAB: is this a full on training arc? Like a lot of time will focus on them really doing challenges and stuff?

TPAB: so like, I will train, figure out where I lack, get some sentimental moments in, villain attack, I figure out how to improve, and I beat villain?

Keiko: Hahah that would be pretty formulaic. I’m expecting the unexpected with this one since the villains are all ready to go

Leap250: Not even, surprisingly. You forget that MHA villains, like, the “real” villains, are very rarely this one-dimensional

TPAB: so it’s not much about training then?

Keiko: True. I feel like they’d attack at the right time, when everyone’s spilt up and the teachers can be cut off.

TPAB: I’m sorry. This episode didn’t have anything worth discussing, lol, except for the cat girls

Leap250: I feel like there were a couple of things we can takeaway here that were interesting enough

Keiko: True, like the kids views on heroes was interesting 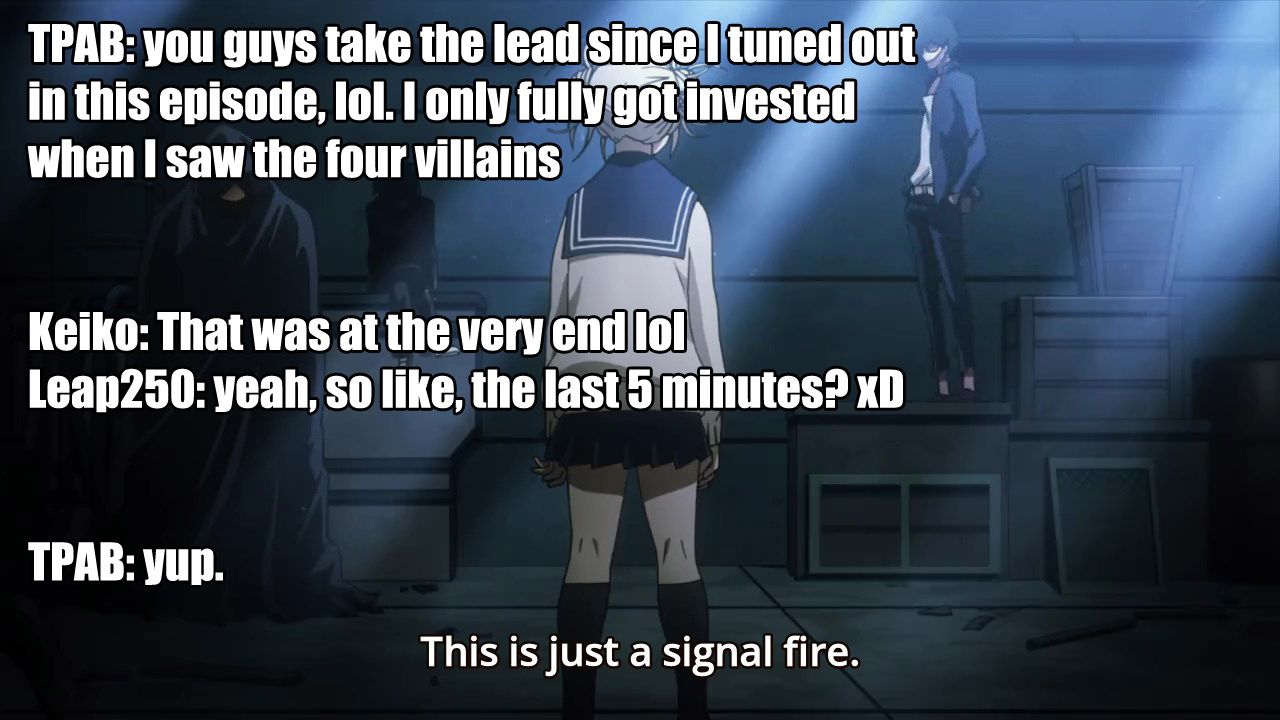 A Few Levels Higher Than The Rest

TPAB: And I think this episode mostly confirmed the guys involved in the Stain fight is above the curve. What did you guys like in this episode?

Leap250: as is in the real world, real life experience beats book smarts

Keiko: Yeah it did confirm that but that’s because they have real life experience. It was a given they’d be somewhat better than everyone else with everything they’ve been through

TPAB: the episode very much pointed it too, so will this actually be an issue that the four is above the rest?

Leap250: what Keiko said mostly, the views on heroes, and Midoriya’s passing mention of the idea of world-shaping by being around heroes all the time

Keiko: Yeah those were interesting points in this ep

Leap250: if anything it could only push the others to be better right?

Keiko: Yeah, they’re going to improve through the training camp as well so it’ll probably just push everyone to do better

Leap250: Who do you guys think would improve the most? This is entirely subjective btw

TPAB: I think yaoyorozu will get some time. Gravity girl too, of course

Leap250: it would seem that Midoriya has plateaued though, no?

TPAB: yeah, I think Deku will take a back seat a bit for now. Maybe he’ll inspire others, and I think he will if the villain fight involves him and the hand guy

Keiko: Depends really. I feel like by the end of the training camp he’ll have improved 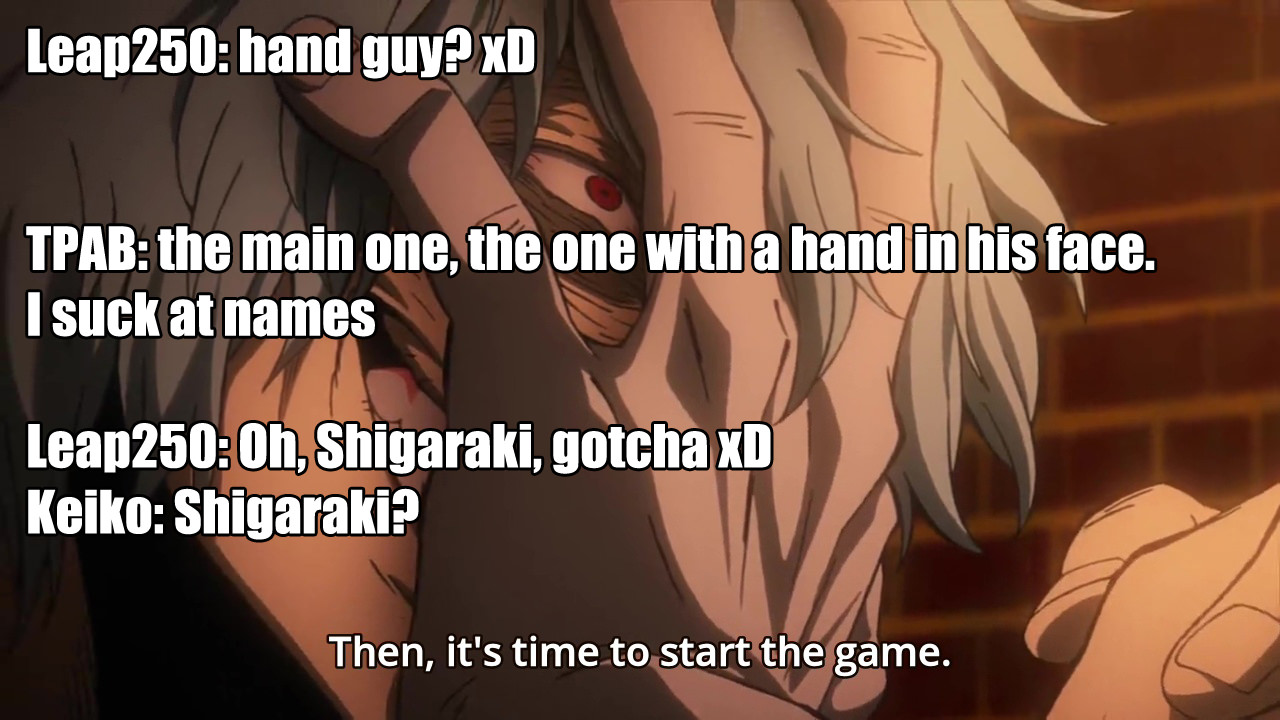 Keiko: I don’t think he is part of the attack group is he?

TPAB: will he join the fight, directly or indirectly? I know it’s early, but ever since the Stain fight ended way too soon, I feel anything could happen

Leap250: when has he ever? xD he always sends his goon noumus, lol

Keiko: Hahaha so true. Aside from that one time in season one, Shigaraki has yet to come out and fight.

TPAB: he is obsessed with Deku now, so i feel like they’d at least hug or something

Leap250: I’d say he’s obsessed with All Might, but yeah

Keiko: He’ll come out eventually, he’ll have to but not yet. I think there’s still time for that.

TPAB: he does love Almight, but he also kinda want Deku. xD

Keiko: Hahaha yeah lol after all Deku is All Might’s protege

Leap250: How do you guys see this arc with Kota playing out? 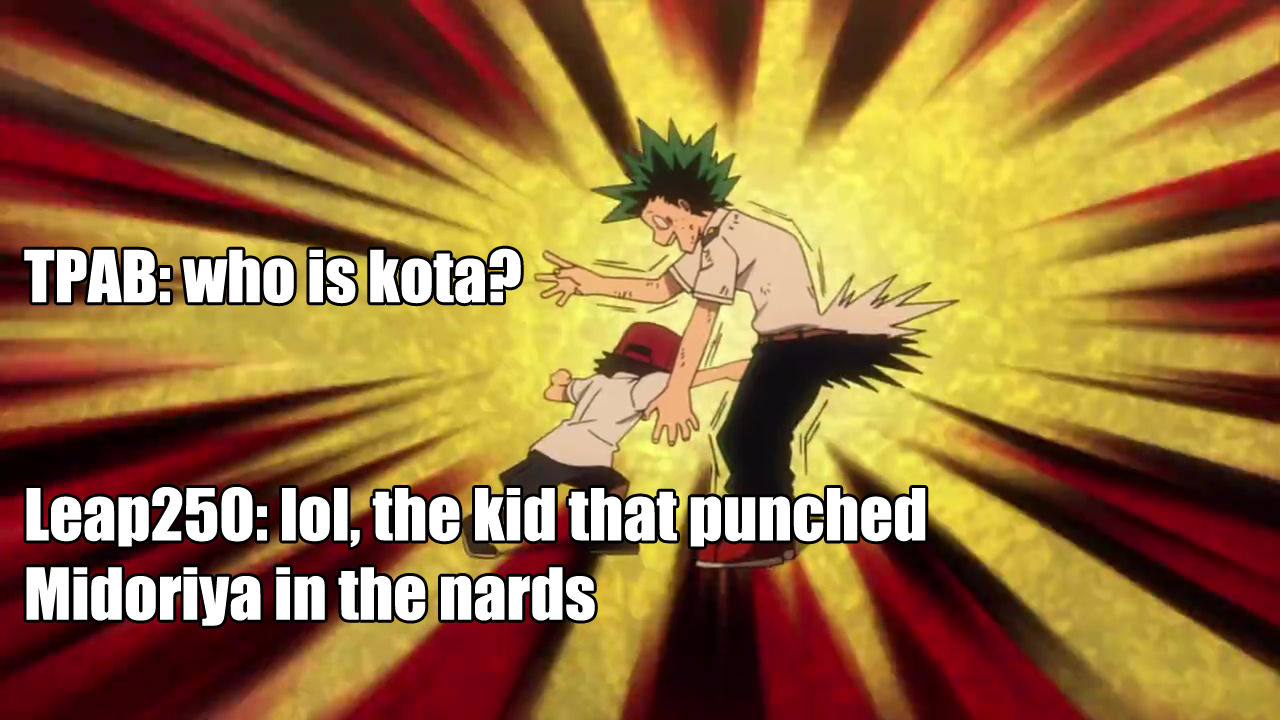 Keiko: He gets in quite the pickle later on doesn’t he? With Midoriya having to try and save him

TPAB: yeah, Deku will save him and his stance on heroes will change. But again, hate the fact that he’s there. I don’t want him there.

Leap250: I’ll venture you guys this though, won’t he just hate the thought of having to be saved by a kid too?

Keiko: Yeah that’s possible. I think being saved by Midoriya won’t necessarily change his opinions on heroes; it’ll just show him his own weakness. That he needs saving, by a child at that. Hahah these are the storylines that end up working really well though.

TPAB: I understand. It’s the stuff that makes BokuAca great, and I know it’ll tie in really well later on. But I’ve waited a long time to see a fight, lol

Leap250: oh you’ll get one so keep your pants on

Keiko: Yeah just wait, the fight is on its way

Leap250: Any guesses on who gets into trouble then?

TPAB: as for characters in trouble, I think Bakugo will fight a really strong one that’ll face Deku next or something. I wanna see the bug whisperer get beaten up. hate him.

Keiko: Yeah I expect Bakugo to do something. He always does lol. Eyy stop being mean! Leave the bug dude alone. He’s just a kind soul

Leap250: I mean, you never know, the dark forest can bring about a beast in someone we all thought was unassuming 😀 It could even be bug guy, lol 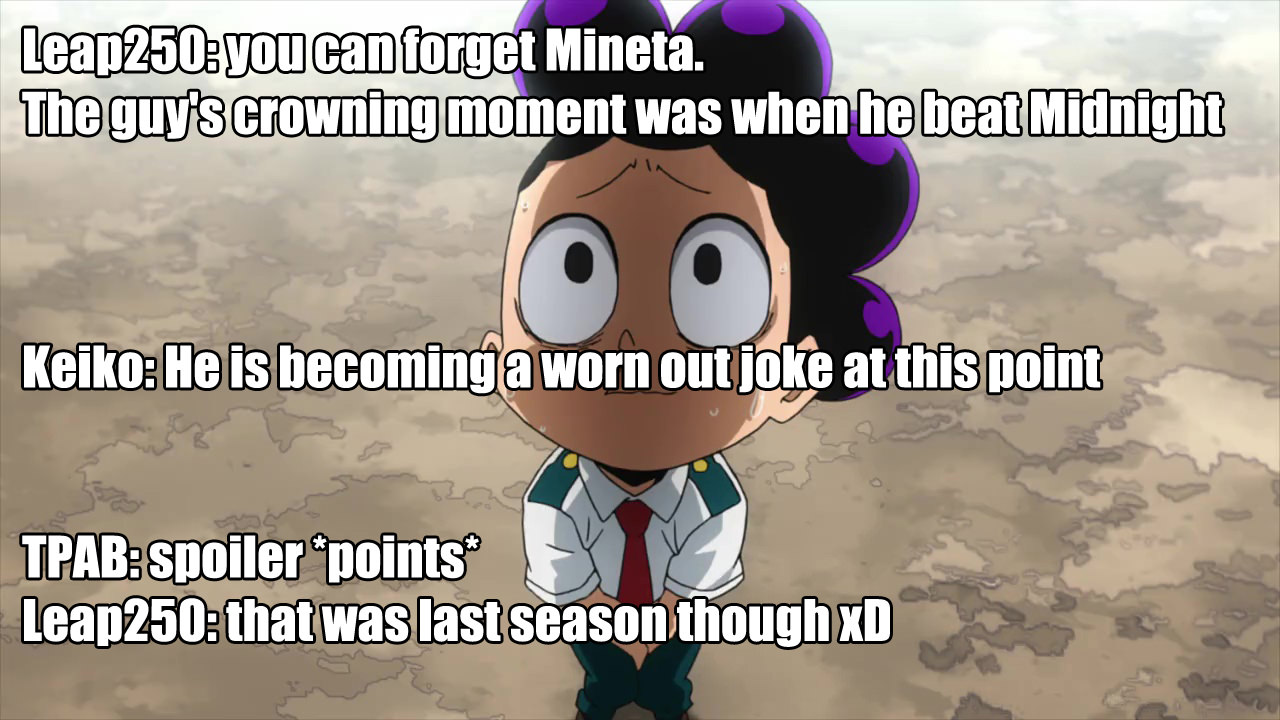 TPAB: and yeah, tired of his pervy gags. hence me tuning out. I do think the whole training thing is just away to lure hands guy out, maybe force the mole out or something

Leap250: would UA really risk the lives of these kids though?

Keiko: Isn’t it just part of the school curriculum? It is a school based anime after all.

TPAB: I think so, yup. They made an effort to say no one knows where its being held, only a couple of dudes

Leap250: yeah, because they wanted to ensure safety

TPAB: Almight could also be hiding behind a mountain or something. At the very least, they expect the enemy to attack. It just looks like a dumb scenario from a very smart show unless more motives is added

Leap250: with an innocent kid in their midst?

Keiko: Yeah it feels like they think they’re safe for now

TPAB: that’s why I hate that kid being there haha

Keiko: Yeah I think it’ll be interesting seeing what happens with him

TPAB: I just wanna one student get severely beaten up. That’d make up for the kid being there

TPAB: I meant someone disabled early on just to display how scary and powerful the villains are. Dibs on bug whisperer xD

Keiko: That might happen once the fight starts lol

Leap250: I dunno, weird stuff happens in the cover of darkness 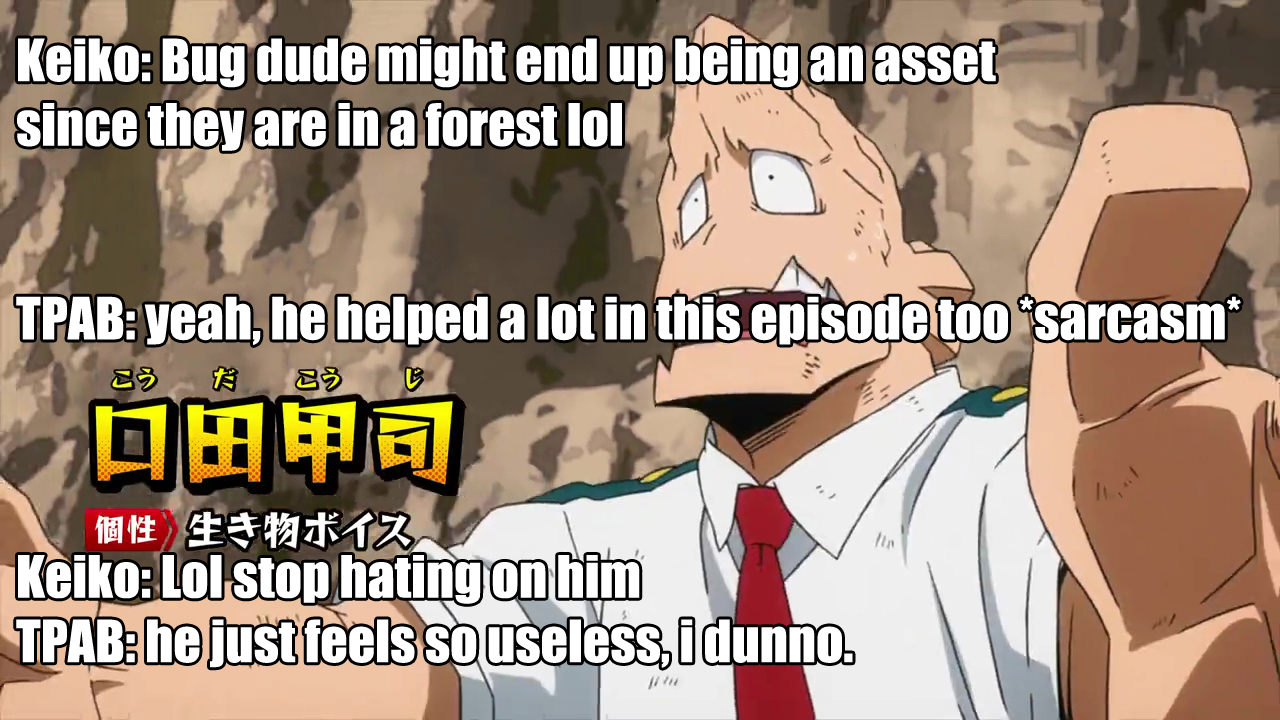 TPAB: we are wonderfully off tangeant, lol. So what else of note in this episode??

Leap250: I think we touched on the important stuff yep

Leap250: there’s the villains, but not much we can talk about from them I don’t think

Keiko: Yeah I think we’ve covered everything. They just made an appearance

TPAB: I can’t wait to see the villains and their powers 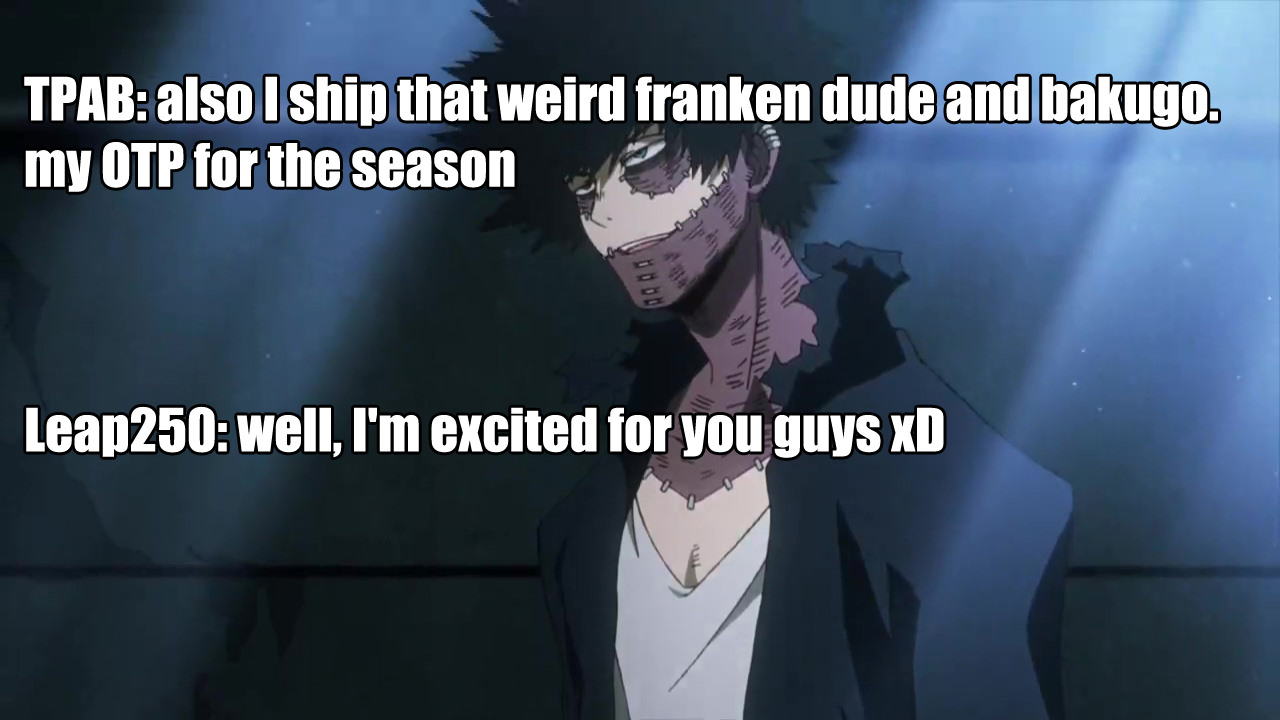 Keiko: Haha looks like there’s some good stuff coming with this season!

TPAB: I think keiko wants to talk about Devil Line in detail now. This episode is a 3/10 for me “too much bug whisperer”

Leap250: sure sounds like it, haha. 6 nekonekoneko laughs out of 10

TPAB: I tuned out! But it’s a 25 episode show so it’ll make up big time for sure.

Keiko: Of course it will. This is BHA after all. Yeah let’s go

TPAB: go Keiko!!! I wanna hear your thoughts on everything in the Devil Line episode, lol