Finding more good reasons to watch episodic shows, and slowly avoid doing reviews, I enter the Spring 2018 lineup with another collaboration effort. This time there are three of us, and my fellow bloggers chose awful shows! Let’s read on.

Presenting T(a)LK, a round table discussion about a current airing anime. Me and Keiko basically did the same thing back at Winter 2018 when we collab on After the Rain. This time, I asked Leap to join us. Each of us picked a show from this season, and we watched them as they air. Each week, we’ll T(a)LK about the episodes, and share the mess on our blogs. I picked Boku no Hero Academia season 3, Keiko picked Devil’s Line and Leap picked Mahou Shoujo Site. We’ll blog about our chosen shows, and slowly let the insanity take over. BokuAca3 thought it was a great idea to do a recap episode though, so there’s really nothing to discuss here.

TPAB: you guys hated this episode too, right?

Keiko: I didn’t hate it, it was alright. It was just a recap though

Leap250: I should point out that this doesn’t happen in the manga, obviously xD

TPAB: they didn’t have a gigantic sausage party with everyone shirtless in the manga?! Shocking!

Keiko: Hahahaha Mineta would have loved that especially if the girls turned up in their bikinis lol

Leap250: as a personal note, I promise not to try to spoil anything moving forward, lol

Leap250: I thought how they handled the recaps was okay

Keiko: Yeah the whole pool thing was a good idea and the races were fun to watch. So they did add something to it.

TPAB: everyone was muscular though, haha

Keiko: Lol yeah. Goes to show how much these kids work out

TPAB: hahaha it was a weird refresher episode but I guess it works since I forgot a large chunk of the story and the episode did help me catch up 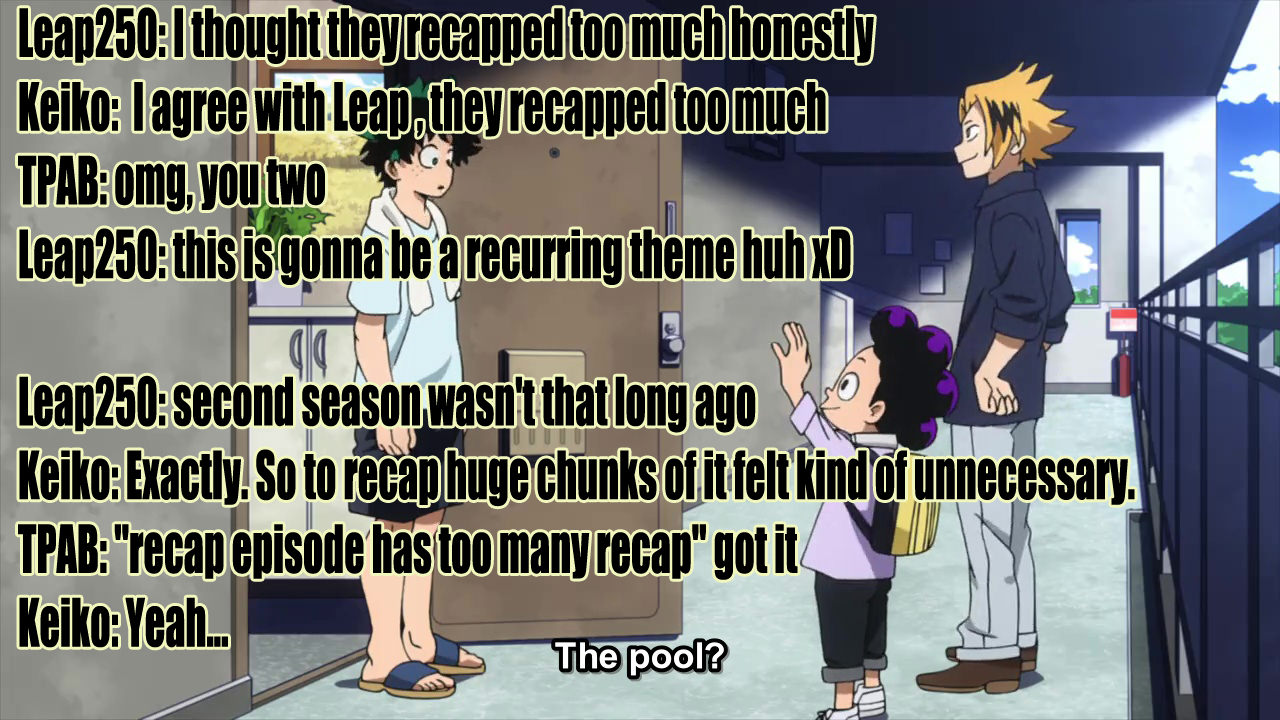 Leap250: I get recapping like, key scenes, but character intros again?

Keiko: Yeah I don’t think we needed a whole class intro again. That felt like a huge waste of time

TPAB: I think they did that because the next arc will involve all 20 or something. I like it. It reminded me who is who, lol

Leap250: should I confirm or deny this for y’all?

Keiko: Hahaha go on, they’re not all important are they?

Leap250: …on second thought, I probably shouldn’t, given how I’d answer this, hahaha! they’re all good students 😀

Keiko: This class is too good for one of them to turn out rotten….

Leap250: don’t try to read into things I say during this, for your guys’ benefit, haha

TPAB: this is a weird setup, lol, but i figured it’d just be like when the bad guy attacked them in the first season, everyone is sectioned off doing their own thing

Keiko: I don’t know what will happen. They’ve got a summer training camp right? So they could all get separated into groups.

TPAB: yeah, separated into groups, then attacked by the bad guys. I can’t wait to see the awesome new villains 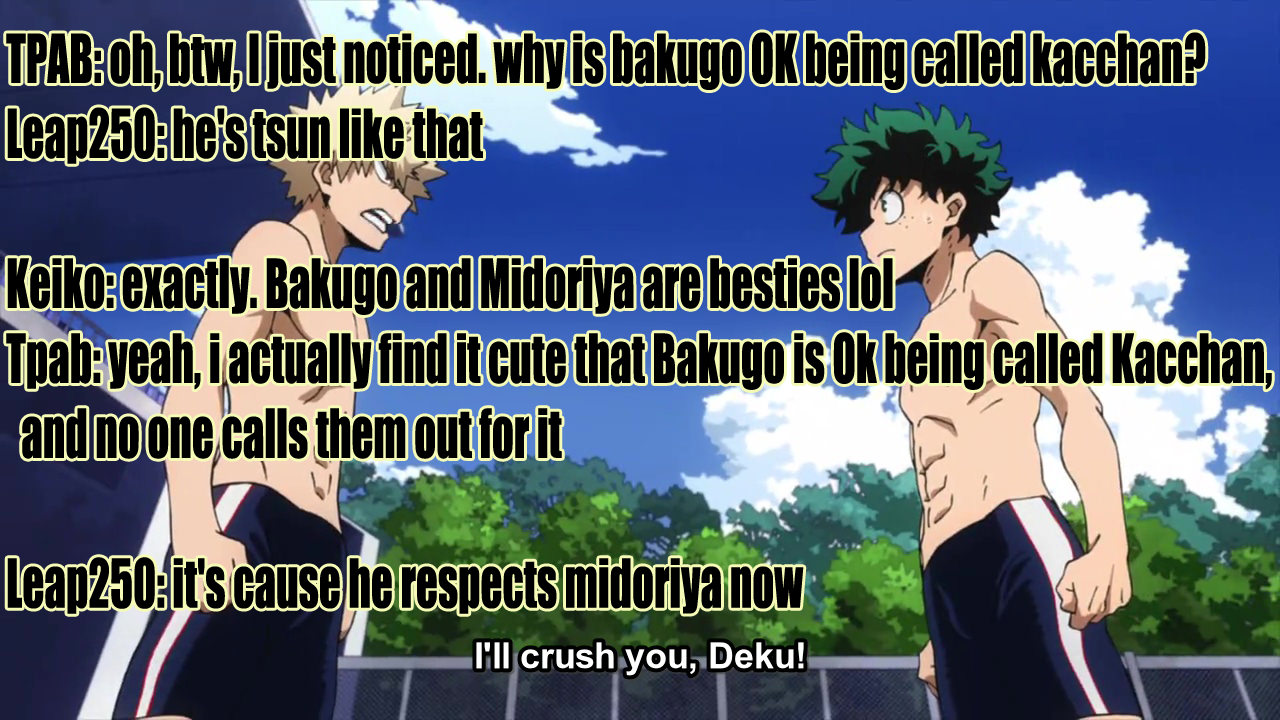 Excited About the Next Arc

Leap250: I will say, this arc has some of my favorite villains

TPAB: oh, i don’t know how to feel about that

Keiko: I guess it’ll depend on how the fights are directed…. they could turn out to be longer in the show

Leap250: it makes sense that the arc is long though.. the scale is bigger, in vague terms, lol

TPAB: or fast, like the tournament arc, and maybe just setup more character points or something

Leap250: you guys got a fave student?

keiko: Bakugo’s my fave. Always has been lol

TPAB: my fave student is froppy 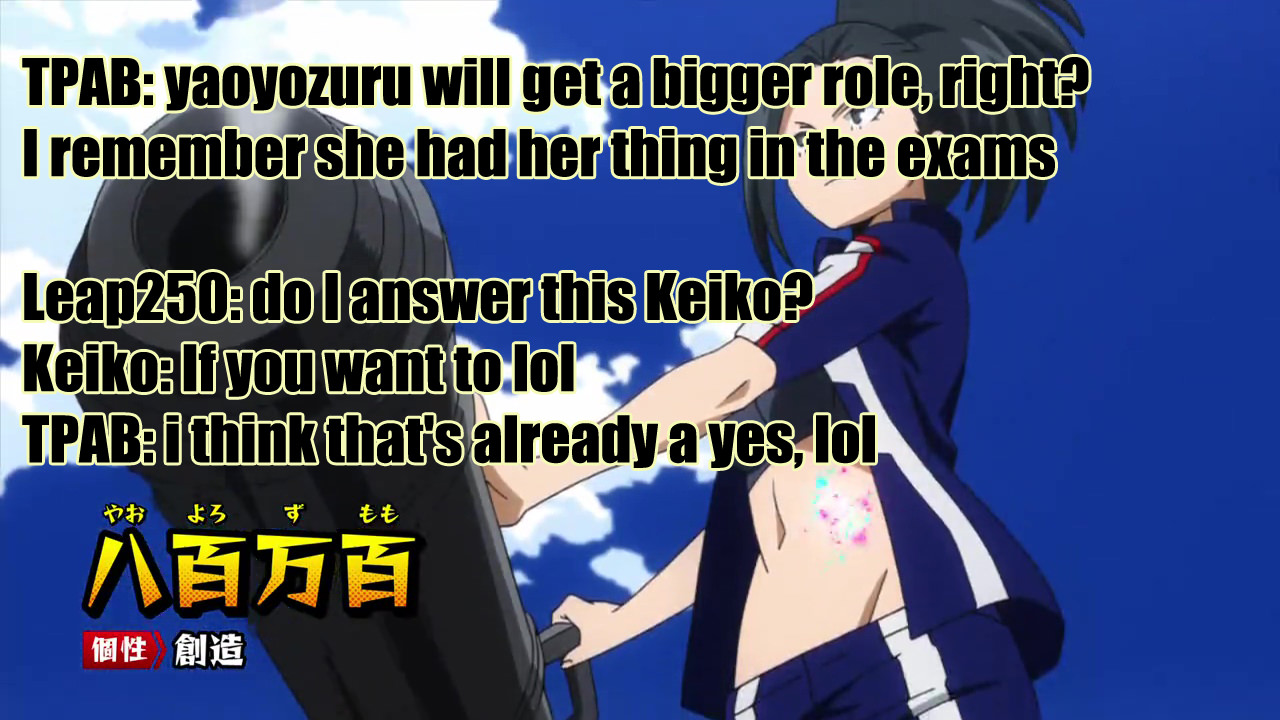 TPAB: here’s one i’ve been dying to know: the cop friend of Almight, is he VERY important to the plot?

Leap250: this is gonna be how our MHA talks are gonna go huh xD

TPAB: oh, i always though he was a bad guy, and yeah, your fault for reading the manga :p

keiko: We’ll just have to wait and see what role he ends up playing

Leap250: oh, lemme pose this then since this was already a thing last season: who do you guys think is the mole?

Keiko: I have no clue honestly

Leap250: don’t worry, this hasn’t been resolved in the manga yet

TPAB: it IS the cop! 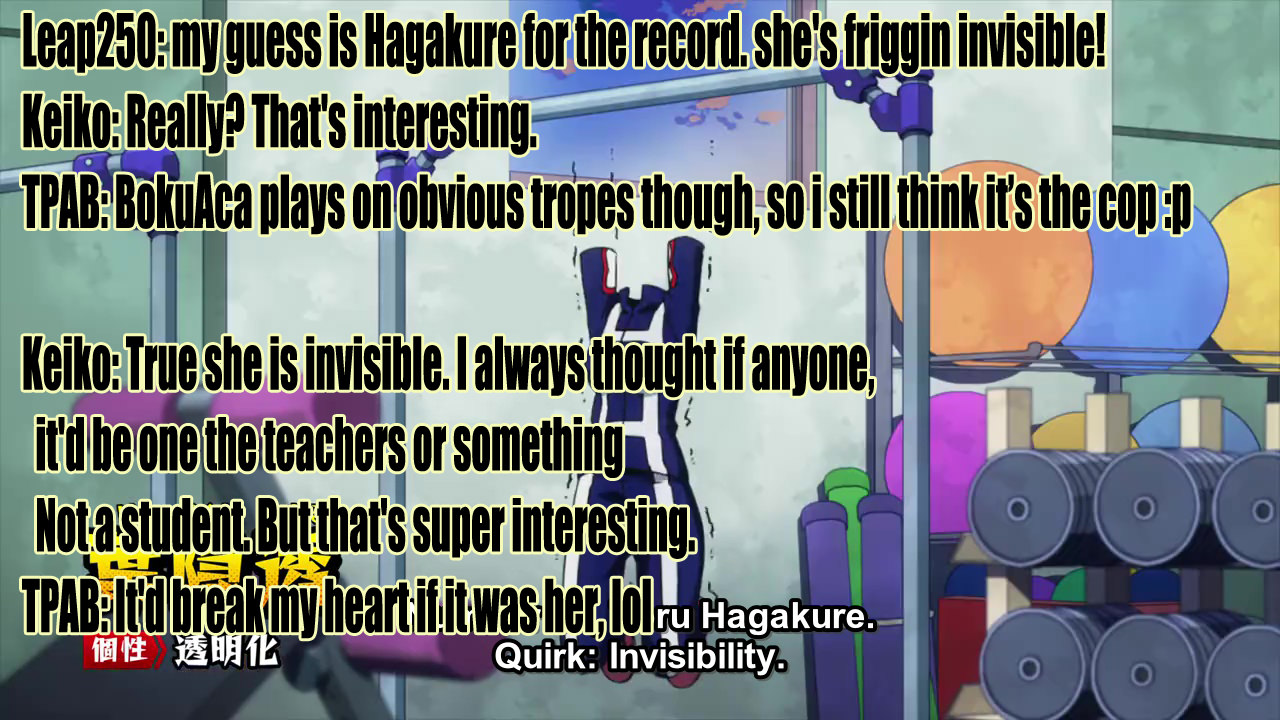 Keiko: Hahaha really? I like all the students lol

Keiko: That dude’s weird but he makes me laugh lol

TPAB: i need to hate something this season, lol, or else you guys get all the hating. You also like the guy that whispers to bugs?

Keiko: Exactly! He’s a good guy! You’re choosing the wrong place to show some hate lol. There’s two shows that deserve it more that this lol

TPAB: love his tail hate him

Keiko: Hahaha I love how you hate the students :joy:

Tpab: what about you leap? who do you hate?

TPAB: even tail guy, he might be the mole

Leap250: I just single out tail guy ’cause lol that’s literally his power

Keiko: Hahaha I think his tail is pretty cool…. like an extra limb lol

Leap250: and then you look at all might and he’s just… strong xD

Keiko: All Might’s got his smile too lol 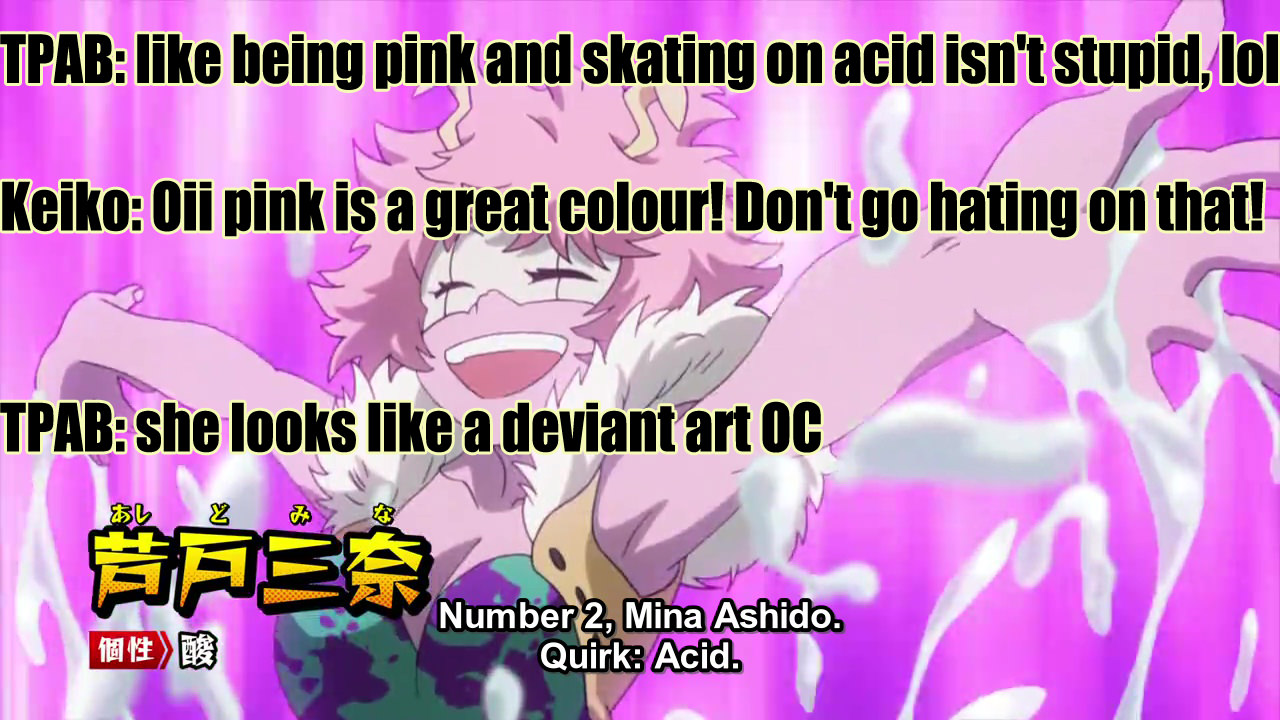 TPAB: but anyways, this was a pointless discussion, lol. how bout we end by rating this episode? a 4/10 for me.

Keiko: True lol. Err hmmm I guess I’d give it an optimistic 5 lol

TPAB: cool, now onto devils line!!!! you start it up cakes