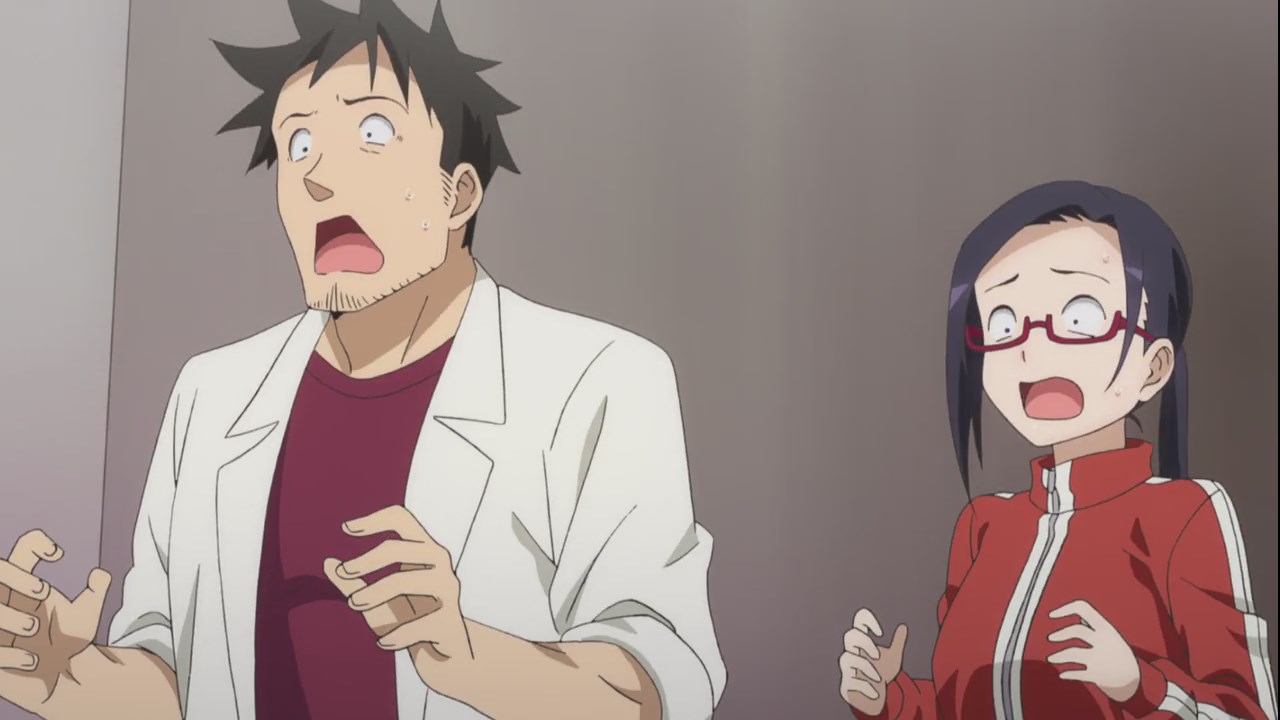 Okay, so a bunch of us bloggers are doing a collaboration post. We do this sh*t on Discord, and anibloggers are invited to join. I’ll happily send you an invitation link if you’re interested in joining our brewing-brainstorming sessions. Anyways, Irina suggested a blind review. Shoka, Astralgemini and TPAB have agreed to join in on this random fun. The rules are simple: Irina provides a bunch of pictures about a show, and we’ll do our best to review the anime itself. These are our only access to the show, since none of us have seen it before.  We’re going in blind, groping as many things we can grope and coming out as better people…I think.

Gawd, that title just leaps out at you, eh?

I’ll be honest. I’m a serious reviewer, so I’m not really sure how to do a blind review. I’ll try to seriously grope things and I’ll just go from there.

Irina gave us these pictures to work with, starting with the title poster. 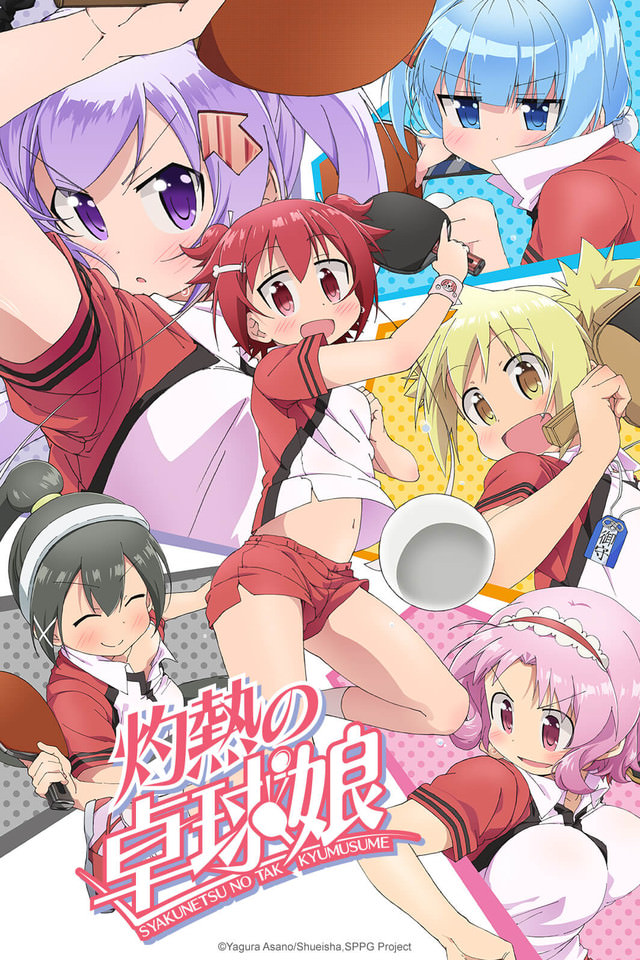 I like the design. It has dynamic lines, and it looks polished. And look, an exposed belly button. Is that supposed to be cute? Or fan service sexy? I guess both for people with belly button fetishes. The title poster is screaming out the character’s stereotypes though. Violet hair girl is obviously a tsundere. Look at her go tsun tsun with that pose. Next to her is obviously the kuudere. If this anime is a comedy, then kuudere here will be more than stoic and detached. I bet she’d be the comedy man, and our straight man is…..the chick in the middle.

Oh boy, lemme guess. She’s a transfer student, she recently joins the ping pong club, and she’s acting as the straight man for everyone. It’s kinda like Yuru Yuri with the same red colored girl as the “normal” girl in the bunch. What was the club in Yuru Yuri again? I don’t think it’s really a yuri club…..wait, is it?

Hyper girl, the sporty loud type is obviously the blonde girl. Pink haired girl is clearly the big breasted girl, since her bozookas are meticulously added in the title poster. Yeah, that’s her defining quality and it needs to be in the poster. Ok, last girl is the big sister type. She’ll be the well behaved, timid and gentle type. The anime seems to be a dependable show, upon first impression.

Ok, we got GIFs here.

Ohmygawd, that’s some incredibly polished show we got here. Wait, a green haired girl? She’s not in the title poster.

Crap, is this a serious club anime?

Hmmm….I am not sure. I’m guessing some episodes are, but for the most part, the characters are just goofing off. After all, they’re cute. Or has cute girl doing cute things anime turned serious in 2016? I hope not.

It just looks like the studio is showing off. Ok, who presented this bag of fluff? 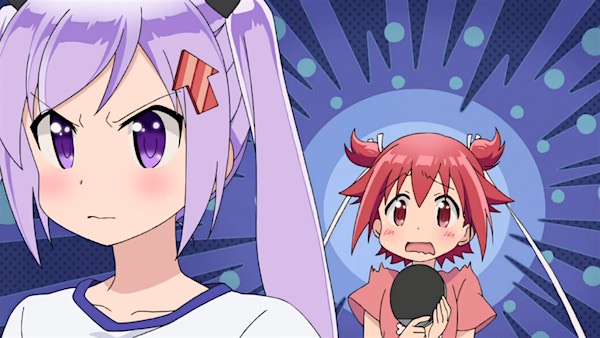 Oh, that’s surprising. I believe they did Barakamon, and that’s as far as I know about them. They seem to be exerting a lot of effort now, huh? Considering they once gave us forgettable shows like Code Breaker and Yuyushiki. Barakamon is incredibly polished though, and it looks like this studio is holding up some standards. Good for them.

That last GIF bothers me. It’s loaded with so many details. I can tell its copied, maybe rotoscoped, from an actual ping pong match. The flow is so well done. Given its rather short scene though, I can tell it’s not really a regular thing for the anime to display such crisp animation

Or is it? I’m groping blindly, and I cannot tell for sure. 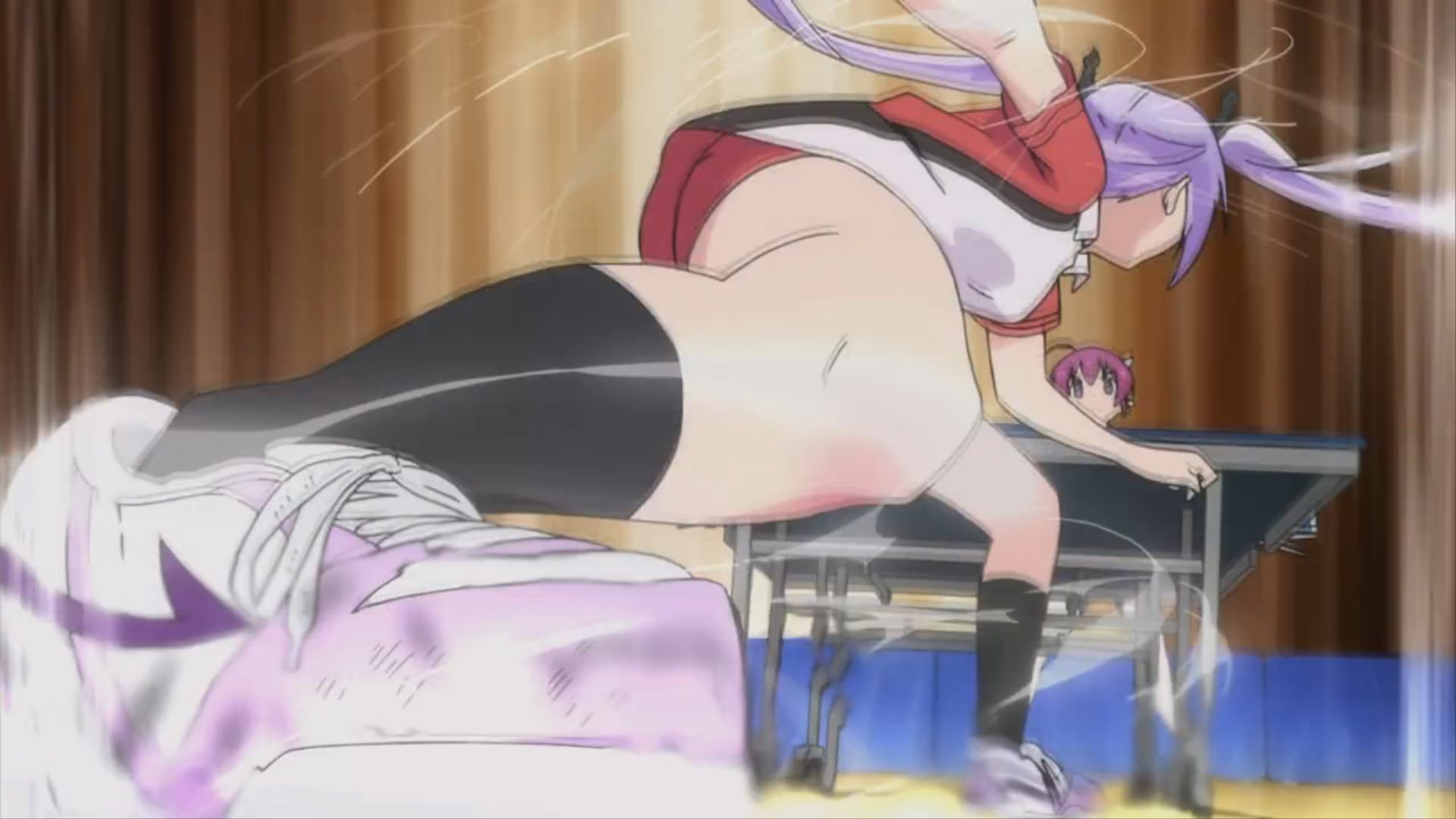 I can tell the director is hella talented though. So who directed this crap?

Ok, what else did he direct?

Ok, I just groped the director blindly, and I like it. But whoa, going from Code breaker to FMA:B, the director must be wildly good. Since this is his outing after Brotherhood, I guess he has room to prove he is a good director. He couldn’t have chosen a f*cking shounen anime though? What? He read “scorching ping pong girls” and his passion just lit up?

He isn’t a stranger to cute anime though. Alien Nine is kinda cute, but it does feature alien hats that kill other aliens, so I think the director is just going back to his roots. Good for him. 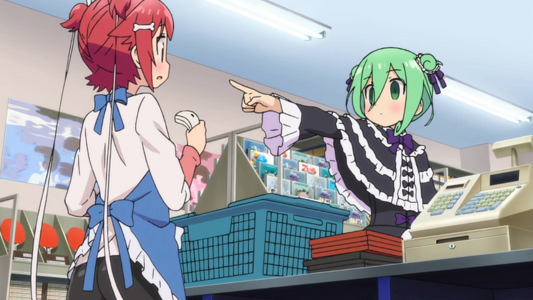 And hey, a non ping pong thing. I’m guessing the anime has a lot more of these. The aesthetics reminds me off Nichijou, for some reason. Green haired girl is here again. If this is from a four panel manga, then I guess characters they fight eventually become part of their cute bubble, so recurring characters are aplenty. Is this a ping pong club store? Are those ping pong paddles on the bottom left side of the pic? Ok, so maybe this anime is focused on ping pong a lot.

Then 40% just goofing off (random convos, studying for exams, shopping, eating cake and all that stuff)

Of course, I’m just blindly groping so I can’t be sure. I heard one of the other collaborators are also planning on seeing the series, so we’ll see who guessed the show correctly.

My blind review is overly analyzed, but you can read up on how the other bloggers interpreted the pictures and stuff.

Good luck, everybody else!!!!