The image above is from a visual novel in the DS. I have it in an emulator, and it’s ridiculously easy. The girls are just throwing themselves at the guy, and the flags are automatic. After the second date, the girl is scarily stalking you and it’s ruining their stereotype. The routes are cute though, but nothing I haven’t seen in an anime before. I do constantly imagine how this would work in an anime though. With such a complicated setup, I do believe Yosuga no Sora really got it right. They should present the routes one by one and just reset. It’s too bad it never caught on.

This is the second VN I’ve tried. The first one is this Tokimeki Girls or something in the DS as well, and it is f*cking hard. Flags are impossible to get, because the game never really helps you. Characters are hidden so gawd damn hard, and I finished the game without coupling up with a guy. I tried it again, and I reached the end working on one guy but then the rival character swooped him away and his love meter dropped to zero. I f*cking cried. VN Girls have it rough. You have to constantly ask the guy out, buy clothes that appeals to his personality and you have to fend off another girl for the guy’s affection Meanwhile, in the game above, dates are automatic and it simply moves you from friends to lovers. I’m already in a relationship with a girl in the game, and I didn’t realize it. What the hell? Are VNs either super easy or ridiculously hard for no reason?? Reminds me of Persona 4 and Harvest Moon. In Persona, you just have to talk to the person while building stats. In HM, you need to make sure the gift you’re giving isn’t something they’ll hate because it will mess you up.

Anyways, I’m supposed to be doing a list thing. Where am I now? Ah.

3. Do not restrict yourself to a single genre

First of all, don’t review Hentai. I mean, really. Let’s just keep that particular section of the anime pool murky and untouched. Secondly, reviewing different genres of anime is a great challenge for reviewers. It’s easier to gauge your knowledge on critiquing sh*t if you can properly dissect an anime, talk about each parts individually and then relate to how they work well together. It also prepares you for newer mix and matches down the line. We recently got our first reverse Ecchi anime with Free, and it’s actually exciting knowing that your knowledge of anime can expand along with the industry. You’ll be able to do a knowledgeable critique if you have tried different genres of anime.

Reviewing one genre is also a bad decision, because reviewing anime takes a tool on you. After the nth anime, you’ll be numb seeing the same tropes done over and over. How many anime reviewer lasts long? Some of them give up early on, because seeing the same thing can get sickening. Anime nowadays actually celebrate the diversity, but anime from before often follow a trend. We recently got out of the K-On trend of four panel bulls*t but previous trends include To Love Ru’s perverted insanity, the vapid rush of eroge VNs, and we’re currently in this trash LN trend with Mary Sue characters. I swear to gawd, it will take a toll on you.  I once reviewed five marshmallow shows straight, and I grew a bit more hateful of anime in general. It’s like eating the same thing over and over. You’ll eventually find it “great” at first, and then it’ll just be “OK” later on until you finally find something else to eat. The same goes for anime. Don’t just consume one genre, because you’ll eventually get sick of it. 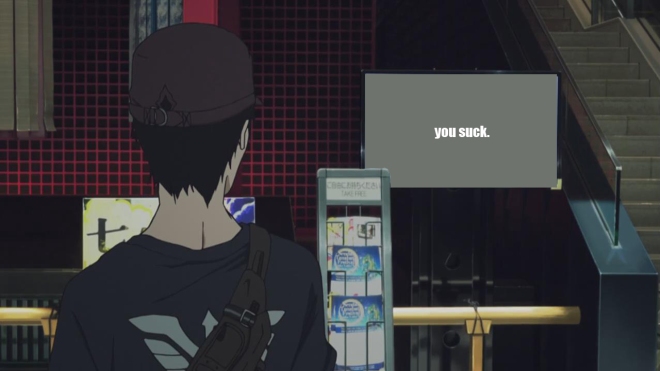 You can claim to be an expert of one genre though. You can focus on being extremely knowledgeable about one genre, and that’s fine. It’s still ideal to review different genres while you do that. Why? It’s for comparing and contrasting elements. Since there is no pure single genre, with an exception for Shounen because the formula works by itself, you need to be able to understand how the romance worked in that Action anime you watched. Is it a distracting romance? Did the love story compliment the show’s tone? Did it enhance the action? You should be able to know how one genre functions, so you can gauge how much of its influence made the overall show better. You should know if one genre is forced, if one genre is unnecessary and if one genre ruined the entire thing. You can really only do that if you have a good idea of how the genres actually work. Just have fun with it.

Don’t be scared to review a genre you won’t like, because it’ll only help you grow. I hated mecha when I started doing this TPAB thing, and now I still hate it…but I can also tolerate it. I hated otome anime to death before, and they’re actually okay by me now. I loved romance before, and I now think it’s a formulaic genre. Visual novel anime sucks to me, but I now understand its sad existence. If you want to be a reviewer, then everything should be a challenge waiting to be tackled head on. I regret 50% of the anime I reviewed, and I’m still going at it. What’s your excuse?