This is review number one hundred and eighteen. It’s part of the Spring 2011 lineup. The Fall 2012 lineup has also ended so I’m going to be busy before the year ends. Tomorrow will be the supposed end of the world though. This is the umpteenth time someone declare the world ending so screw that sh*t. I’m going out to get drunk.

Anyways, the anime I’ll be reviewing is Sengoku Otome: Momoiro Paradox or “Battle Girls: Time Paradox”. It’s a thirteen episode anime about a girl travelling back in time and meeting a sexy wild version of Nobunaga Oda. Yeah. Let’s read on. 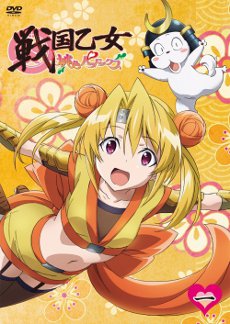 The anime is about a girl named Yoshino Hide. She’s a bit of a klutz and she would always arrive in school late. This concerned her teacher and warned her that if she failed her subjects, she’ll be spending her summer vacation taking make up classes. Yoshino is desperate and decided to pray to a temple. One thing led to another and Yoshino is suddenly transported back in time to the Sengoku Era. She meets Oda Nobunaga and surprised the man who unified Japan is a sexy chick in a half-naked battle suit.

This is another Sengoku era anime. I’ve seen a few of them but I’m surprise just how many of them are out there. There’s a lot and the Sengoku era seems to be one of the most overused stories in anime. I would love to review them all if I can. The funny thing about Battle Girls: Time Paradox is that it seems to be the same as Oda Nobuna no Yabou (Summer 2012 anime) in terms of the premise and it only differs on a few things like the main characters. Oda no Yabou is also a bit of a loli anime while this anime seems to have more of a  lesbian appeal. I don’t know the term for it. Is it Shoujo Ai? Well, whatever, it’s leaning on the Shoujo Ai side which I find a bit refreshing.

The biggest charm of the anime is the fact that the famous figures of the Sengoku era are girls. They’re hot sexy girls to be precise. I wasn’t fazed by it because I’ve already seen it done in Oda no Yabou but the difference is that the girls in the other anime are more on the loli side. It followed the same set up too. The main character was transported back in time, they became a vassal of Nobuna, they both took the name Hideyoshi (the man who reigned after Nobuna died), and they helped in the campaign of Nobuna. The big difference in Battle Girls Time Paradox though is that Nobuna is out to collect the “Crimson Armor” that was told to give the owner the ability to unite Japan. There weren’t a lot of conquering in this anime and the battles are limited.

In fact, most of the episodes revolve around simple things like telling ghost stories or rehearsing for a play. I was a bit bummed by this aspect of the anime because I wanted to see these half naked girls battle and I rarely got some. Those fluff episodes are pretty nice though because the characters pretty much carry the show. I would think the idea of transforming historical figures into clichéd anime characters would get old but it doesn’t. The way the characters interact with each other is pretty fun to watch and the little lesbian teases kept the show interesting. There were definitely some funny moment in this anime that was nicely executed by the characters.

If the girls aren’t out doing normal stuff then the episodes are mostly about Nobuna trying to obtain the pieces of the Crimson Armor. They were scattered all over Japan and different feudal lords now own it. So Nobuna would often ask for the pieces. Of course, the feudal lords refuse to hand them over so it ends up in battle. It’s not the army type of battle where you shower the enemies with arrows and rape their horses though. The fights are mostly one on one and most of them are influenced by Yoshino’s attitude towards peaceful resolution. The fights aren’t that great. They are mostly means to an end. The characters just swing most of times and it was only used to enhance the story. This aspect was once again carried by the characters. I don’t miss the action because the characters make up for it.

The anime also uses the historical references very freely. The anime explained why the historical aspect isn’t that important but it is a good thing. I cannot tell you how many times I had to wiki some characters and events just to get the references of most Sengoku era anime. In this anime, it doesn’t matter. They only used very little of it to the story. Part of it is because there were very little historical characters introduced and they were mostly doing normal stuff like telling ghost stories.

The main story of the anime was about Nobuna trying to get the Crimson Armor. The other part of the story is about the relationship of the three main characters. Oda Nobuna treats Yoshino pretty special because she thinks like no other and this often gets under the skin of Mitsuhide Akechi who has spent most of her life trying to make Nobuna happy. This part of the story was the best part of the anime because it had a very steady build up and hits a very memorable climax. The Crimson Armor story also had a very interesting climax but I find it a bit predictable. The twist leading up to the finale was nicely done though.

The characters are the main selling point of the anime so they are pretty well done. Yoshino is the typical airhead and klutz. The part about her thinking that she is in a place where the characters are cosplaying was pretty funny. The nice thing about her is that she gradually transforms into a dependable person as the anime progress. She’s also the comic relief though so see her get tied up in trees most of time. Nobuna Oda is just right. She’s arrogant and a bit of a wild spirit with a diehard attitude. She also has a pretty big rack. I mean seriously, you could eat out of it. Mitsuhide is the smart type and I love how her jealousy builds as the anime progresses. The anime even had time to give us a flashback of how she served Nobuna. You can feel her hate towards Yoshino. I love how two faced this girl is. The rest of the characters are based off of their historical counterparts but given the added anime twist. They had very little role compared to the other three but they make use of their screen time as much as possible.

The anime also explained the time travel aspect of the story. This was something the anime Oda no Yabou skipped. The explanation was pretty alright but it was predictable as well. The limited cast made for a pretty predictable twist. The one thing the anime didn’t explain though is why all the characters in the anime are all girls and how the little dog can talk. Freaky as hell. 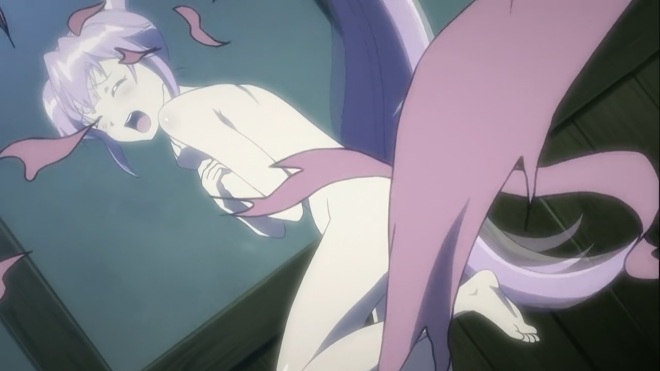 The anime promised some nudity and I even went as far as to get the BD version of the anime but there wasn’t really any Ecchi worthy of being mentioned. There was only one time a breast was exposed and most of the fan service in the anime was about the characters touching each other or the way their boobs bounce while on horseback or the way they just stand and let their sexy body clad in sexy armor be revealed for the audience. There was a scene where a character pee her pants though and I guess the transforming scene at the later parts of the anime was fan service. It’s nowhere near Highschool DxD level though.

The action scenes are OK because there were some impressive effects thrown here and there. I just wish they were longer because the characters really stand out when they fight. No weapon is alike and no fighting style is the same. I love how arrows, kunais and even cannons were used in the fight scenes. Nobuna often just swing her sword and the enemy is defeated. Like I said, it was used to enhance the story but it was nicely animated despite being short. 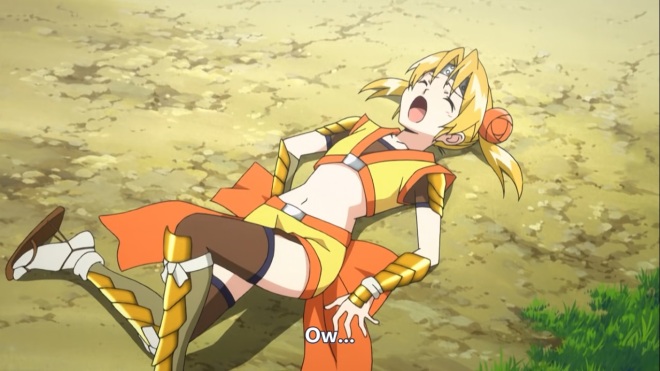 The anime’s OP is “Kagerou” by Tenka Tori Tai. This was a nice song and it was sung by some seiyuus in the anime. Their voice is very distinct so I just love that special touch in the OP. It’s the typical Jpop song but it had a nice beat to it. I also love the lead guitar in the song as it slowly reaches the chorus. The OP sequence features all the characters and summarizes the situations in the anime pretty nicely. There are no spoilers so that’s all good.

The anime’s ED is “Atsuki Ya no Gotoku” by Tenka Tori Tai. This is a slow song with a pretty serious beat to it. The song slowly picks up pace in the chorus though and the voices of the girls makes the song pretty amazing. The ED sequence features the main characters of the anime butt naked and in different poses. The important stuffs were all covered though by some long fabric or something. It’s nice because it had the fan service of the anime. Nothing daring but sexy nonetheless.

6/10 “It’s nothing big but the characters makes the anime memorable.”

This is a nice anime. The characters are the reason why you should watch this. If you like fan service in your anime but also sporting a pretty nice story then this anime is for you.