This is review number one hundred and fourteen. It’s part of the Spring 2011 lineup. I’ll be reviewing a visual novel adapted anime that is Ecchi and Harem. Yeah, sounds fun. It’s Hoshizora e Kakaru Hashi or “A Bridge to the Starry Skies”. It’s a twelve episode anime about a guy and a bunch of girls. You know how it goes. So let’s read on. 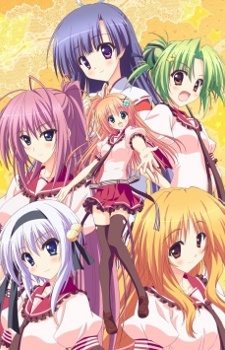 The anime is about a guy named Kazuma Hoshino who moved to the countryside so that his little brother can have it easy. He has a weak body so it was advised that he move to a place full of clean air as oppose to the city. Kazuma and his little brother are now starting their new life in the rural city of Yamabiko. It’s not long before he meets some friends, enjoy activities with them and gradually develop feelings along the way. Looks like rural life is a lot more exciting than he expect it to be. 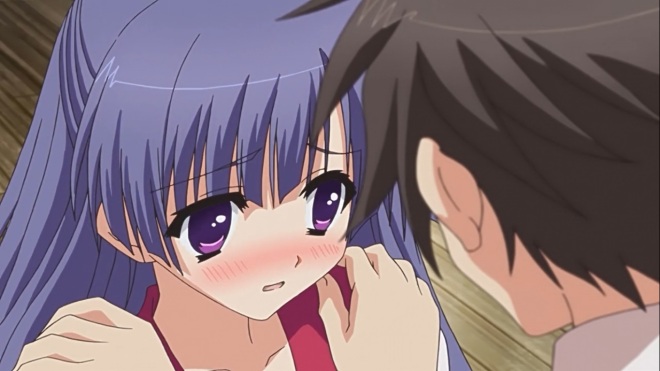 It’s another visual novel anime. After you’ve seen as many anime as I have, you often give a big sigh at genres you don’t enjoy. Don’t get me wrong, VN adapted anime are great but most of them are harem/ecchi with no resolution that often just leaves you hanging. Sometimes the anime try to cover as many stories as it can from the original source that the result is often bad. That’s my initial thought going into this anime and I am glad to say I was proven wrong. I love it when I watch an anime with low expectation and get more than I was expecting. As far as the ecchi/harem genre goes, this is probably one of the best.

This is one of those anime with a weak first impression. I was a bit annoyed too because it was nothing but a bunch of cliché pieced together to create one episode. The fact that all the characters introduced are generic didn’t really seem like something you’d sit down to watch. Nothing caught my attention on the first episode and that the premise was a bit diluted because of the clichés. How many anime have you seen a guy fall on top of a girl? The tsundere best friend concerned for her air headed friend? The guy who just seemingly flows along with the events of the anime? Not to mention the eerily bond between the main character and his feminine little brother. The dude is actually voiced like a girl! They are all red flags of some bad things to come. I’m not going to lie. I feel asleep watching the first two episodes because it was predictable cliché with very little appeal.

I had to review this anime so I strapped on and expected the worse as I proceed to the anime. This anime is in fact one of those anime that only starts getting good after the third episode. The characters are nothing special but they will slowly grow on you. There are individual charms to them that make the anime intriguing. As more characters are introduced, the character dynamic soon started to get good. The first half of the anime is actually dedicated to character introduction and it was more Slice of Life (SoL)/ School genre than Ecchi/Harem. I love the fact that the anime was able to bring forth its visuals while the anime was slowly building the characters and the other genre for the second half. There was nothing unique about the first half. It was just about the characters and the quiet little town they are in but the way the anime handled it was pretty impressive. The first half of the anime hit its climax at episode five, the school festival. This is where the anime gradually become more fun to watch. 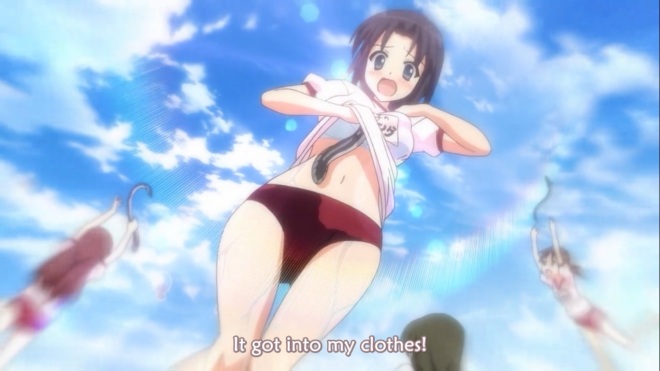 I enjoyed the anime going into the second half because it finally featured one of its promised genres. It unleashed the Ecchi. The anime wasn’t all about Ecchi though. The most you get was bouncing boobs and panty shots. It was introduced in bits in the first half but it slowly became more prominent in the second half.  They were nicely done as well. Just like the SoL/School genre of the first half, the Ecchi was executed pretty nicely. There was no need for anything over the top. Just seeing some boobs bounce and some panties flashed was enough to keep the anime alive. It did get a bit steamy at some episodes but was conscious of its transition from School to Ecchi.

The second half was also littered with cliché but the characters saved the show. There’s nothing more clichéd than beach episodes, bathing episodes and karaoke episodes but the anime was able to keep itself interesting. It’s a character driven show and they were the ones carrying the show. The plot is a god honest mess. The anime tried to loop as many stories from the character “routes” as possible and the result is pretty uninteresting. It’s the weakness of a VN anime. In the game, the guy chooses only one girl and follows her story. You have the choice of playing the game again to choose the rest of the routes. You can’t do that in the anime so it tried to cram as many potential stories it can to keep the show interesting. 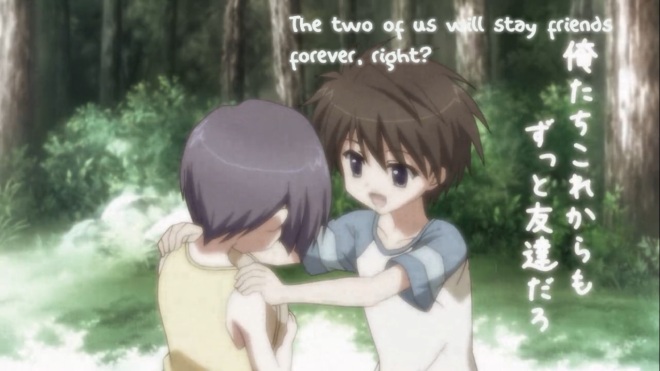 I do admire the effort of the anime trying to create a story from the multiple routes. I mean, some of the characters did have their own individual problems that keep them apart from the rest of the cast. Sadly, conflict should lead to character development and there isn’t any in this anime. Sometimes, the character’s problem is often out of sync with the pacing of the anime. They can just happen at any time with no build up so the resolution often feels empty. The problems served as plot devices for the potential romance to bloom though.

The later parts of the second half shifted from Ecchi to Romance. I really love this part of the anime because this was what I was expecting to see. Actually, I was expecting the Harem to rear its ugly head but Romance was the next stage. The characters had their problem showcased and it initiated a romantic scene at some of the later parts of the anime. The Romance was pretty nice because the girls were finally serious and the anime gave each of them a chance to be with the main character. It’s still cliché though but I didn’t care at this point. I was just hoping the main character does pick a girl instead of a bullsh*t cliffhanger ending where the character settle with mutual understanding. 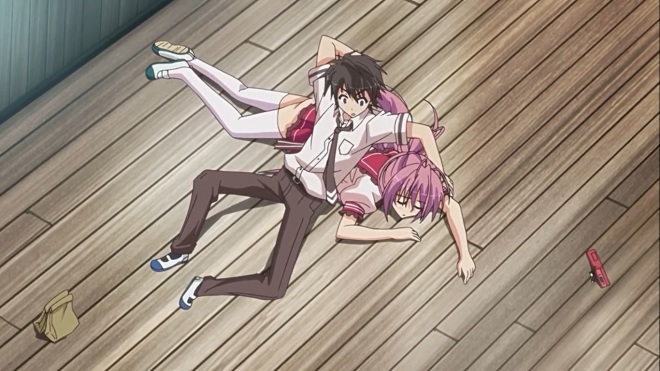 The Romance is what essentially made me love this anime. Yes, he chose a girl among a group of hot girls. The best part is that there are also some rejections in this anime. Yeah, someone confessed and they got shut down. It was pretty rare to see that from an anime like this. I was expecting the damn harem ending but I got something better with some actual closure. The ending was pretty predictable thanks to its cliché filled premise but the journey leading to the ending was pretty amazing. Cliché isn’t a bad thing because it depends on how you use it and this anime is proof that execution is an important part of what makes an anime great. 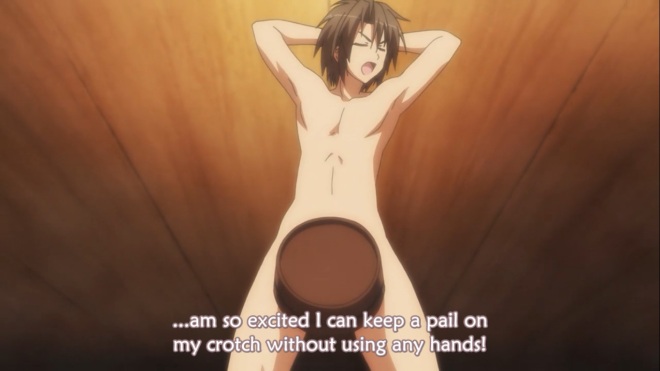 The characters are pretty generic but, like I said, they grow on you. The main girls are all pretty charming. They all have a certain personality unique to them like one of the girls being a big eater. The anime gave each of them so time to shine in the first half of the anime. They all had some alone time with the main character that fondly reminds me of the same set up in old school VN anime like “To Hearts” (love that show). They got even better with the addition of Ecchi. I mean really, how can Ecchi do you wrong? It’s not long before you start cheering for one of the girls to bag the main guy. I would like to give this anime so points for the addition of a freakin Shotacon to its cast. I’m talking about the little brother. He had a girl’s voice and he has a slender girly body. He’s a trap but the way the anime do close up of his chest and the awkward bathing scenes with his brother freaked me out in a good way. He reminds of them boys from Boku no Pico. Yeah. I also like the other guy in this anime. Most Ecchi anime has another guy who is often there for comic relief and the anime was able to bring in some laughs thanks to him. He is also a massive pervert that makes some of the Ecchi anime pretty amazing. I’m glad they were able to use him. Other VN anime had one of him but rarely does anything worthwhile. I’m glad nothing was wasted in this anime. 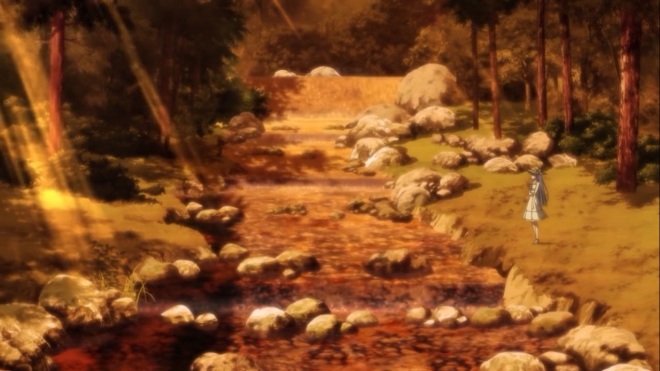 This anime boasts a pretty impressive collection of beautiful sceneries. The whole place was nicely captured with its vibrant green colors down to its gray pavements. The anime was smart in incorporating some scenic shots in the first half and later on in the second half. They really stand out because of their amazing design and the CG blended well. The quiet setting really reminds of those remote places like in Higurashi and Shiki but there are no killers here.

The animation doesn’t really stand out because there isn’t anything big happening in the anime. It’s mostly dialogue. The one thing that impressed me was the kissing scenes. The combination of the brilliant setting, the use of lighting effects and the animation makes up for some awesome kissing scenes.

The anime’s OP is “Hoshikaze no Horoscope” by Nomico. It’s a nice song and the slow pace was something different. Nomico’s voice is pretty nice but the song feels a bit generic for me. It’s a nice romantic song though. The OP featured all the characters and some slight spoilers of the events in the anime. They feel a bit exaggerated though but it’s enough to keep you interested. 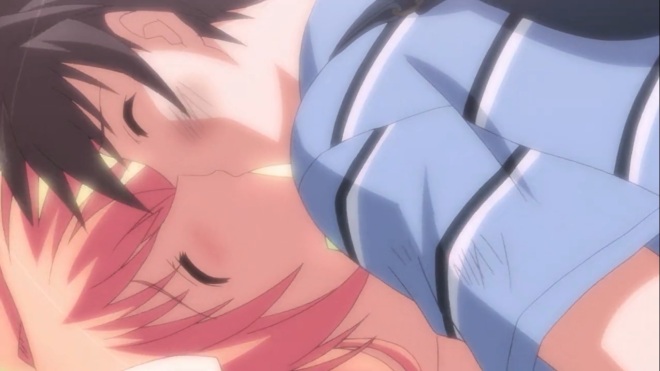 The anime’s ED is “Dasshu do Cinderella” by Eriko Nakamura and Ai Shimizu. It’s a cute song with a catchy beat. Perhaps too cute but who the hell cares. The singer’s voice is pretty impressive though. The ED sequence featured all the girls doing some poses that reflects their personalities. I like this one because they are really posed well.