This is review number ninety one and I’m back in the Spring 2012 lineup. I’m just scraping off all the last bits of the season before I continue with the Summer 2011 lineup I was in while moving forward with the Summer 2012 line up. It’s a busy life for me. One step at a time and it’s all good. Anyways, I’ll be reviewing Acchi Kocchi. It’s a twelve episode anime about moe characters being moe. Eh, just read the review.

The anime is about five friends spending their school life together. Two of the characters though, the serious-minded Tsumiki and the pure-hearted Io, like each other but have yet to become a couple. Their friends couldn’t help but jump in and tease them about it though. Will the two ever become a couple?

Sometimes there are just some anime that is so straight forward that even if you look between the folds, there really isn’t much to tell. As a reviewer, it sucks to review an anime that is simple because I want to share bright and exciting things with people. This is the few remaining anime of the Spring 2012 lineup that I have yet to review and I should’ve stayed away. Acchi Kocchi is an anime adapted from a four panel manga. I’ve always preached about three minute anime not having the balls to go 24 minutes because they’re a four panel anime. I wanted to see something like Lucky Star that went balls out and succeeded in trying. I finally did with this anime. My viewing experience is a bit skewered now because I now hope all four panel anime remain in three minute time frames. Maybe it’s just a wrong kind of four panel but Acchi Kocchi really did nothing than tread the path Lucky Star has already gone through. This anime is Lucky Star with some guys in the cast. In Lucky Star, the only dude in the anime was the guy in Lucky Channel doing weird crap. Acchi Kocchi went further and actually had guys in the cast. It was a nice set up but without a proper story to tell or character progression to follow, the anime falls flat. Lucky Star thrives on the moe and I admittedly like it. Seeing the same process again though, the effect wasn’t the same. I can even make a review of this anime just watching the first two episodes because the rest of the episodes are basically the same.

The anime is about a group of friends spending their school life together. They play sports, talk about random things and they make fun of each other on a regular basis. The one thing that makes this anime special is the incorporation of Romance into the fold. It’s not serious Romance ala Kimi ni Todoke though. It’s a puppy dog romance or elementary kids having crushes kind of romance. It’s still a fresh approach to the Lucky Star concept though. Two of the characters, Tsumiki and Io, like each other and they basically have a mutual understanding of each other. I do enjoy seeing moe and Romance mix because the result is too adorable. Seeing Tsumiki blush whenever she is around Io is a nice touch. They are all lovey dovey and the rest of the characters make fun of it. Seeing her fumble when Io greets her “good morning” and seeing him pet the girl is all adorable and cute. The problem with the moe and Romance combo is that it lacks progression. What do you think? The anime is moe and two characters like each other. Do you think that the two will ever kiss or hug or glomp each other? The anime doesn’t have progression where the two gradually intensifies their relationship and that’s a shame. I don’t care how but I wanted the relationship to go to another level. Sadly, the anime doesn’t want to. It’s just an elementary kind of love where this girl likes this cool guy and that’s it. 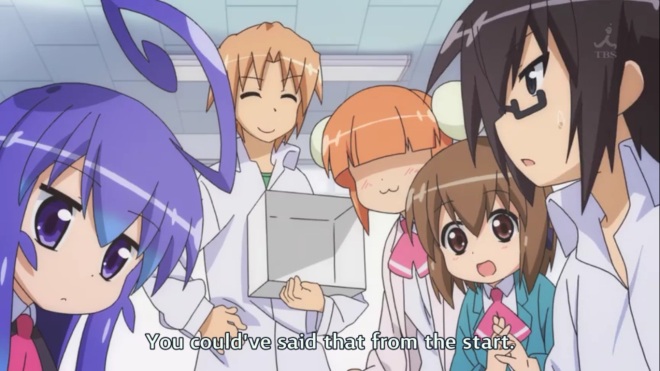 Aside from the Romance, there really isn’t anything new from the anime that we haven’t seen before in Lucky Star. I don’t want to say it but the anime is cliché. It’s the worst kind of cliché where the studio basically does nothing to improve the cliché and just placed it in the anime. That’s a big offense for me because almost every other anime is trying to be unique. The anime basically runs on Comedy and that genre is brought out by the characters. The first episode had me a bit confused because the anime just jumped the gun and had the characters talk random things or play pranks on each other without introducing themselves. I had the same reaction with the first episode of Lucky Star, to be honest, and I heard the director was fired afterwards ( > < ). The second episode is where the anime got off the ground because you basically get a grasp of the characters by this time.

The characters are the main appeal of the anime so you better let them grow on you if you ever want to enjoy the anime. They are all generic at best and they have a specific role to them. Tsumiki is the tsundere with a dandere voice that grows cat ears whenever she wants something like Io. She is also the doppelganger of Konata from Lucky Star. Seriously, it’s like they wanted you to know the resemblance. The guy she is in love with is Io. He is the cool kind of character with a dreamy voice and an awesome personality. He was voiced by the guy who voiced Takumi Usui from Kaichou wa Maid-sama. The anime has a running gag where all the girls gets nosebleed whenever he says something cool. He also does cool things and he is basically shown as the cool kid. Next is Mayoi. She is the hyper active girl we’ve come to know in anime. She is the girl who is the loudest and the one who mostly do stupid things. She is like Tomo from Azumanga Diaoh. The next character is Hime. She is the shy, innocent and level headed one. She is the perfect clone of Tsukasa from Lucky Star. Lastly, Sakaki. He is the guy who gets hurt the most in the anime. He is usually the one being kicked, punched or head butted with some comedic effect.

The anime just pulls a joke or two from the existing stereotypes of the characters. The first three episodes are actually hilarious when all the different personalities supported each other and drew strength from each other. The result are hilarious episodes like when the characters played kick the can where Tsumiki is trying to capture Io by hugging him, Mayoi is doing something random and unnecessarily excessive, Hime is crying while being chased and Sakaki is hurting himself trying to run away. If you’re a fan of this kind of set up happening almost every episode then you have problem, you’ll enjoy the anime. If you like a joke or two from your anime but actually having a plot then this anime will only bore you. 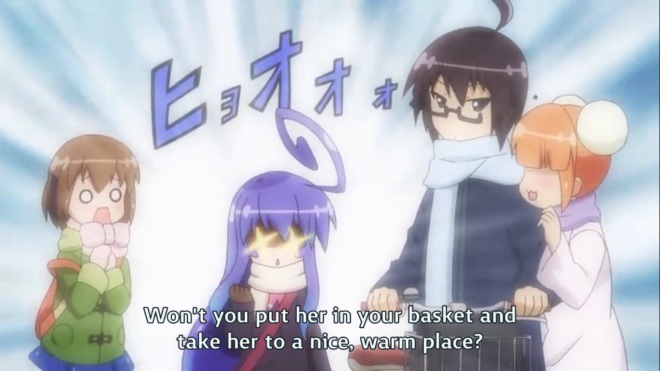 The biggest problem of the anime is that it doesn’t have a plot progression or character development. What you see from the first episode is what you’ll see in the last episode and that is just too boring for me. The anime is repetitive doing the same jokes countless times and the same punch lines like they have nothing more to offer. I’ve already seen the characters play a game or talk about non sense. I already tire of girls swooning over Io as if he’s the only guy in the show. Tsumiki being an adorable cat has already run its course. You can’t feed us the same thing over and over. The viewers will eventually get tired of it. The anime can’t stand for twelve episodes and they should’ve just chosen to do a three minute long anime to save some face. When an anime makes me sleepy then something is very wrong with it. The anime had a nice thing going for it with a nice marriage of moe and Romance with Comedy on the side but they didn’t do anything with it. They just let the characters act cute and the appeal doesn’t last. 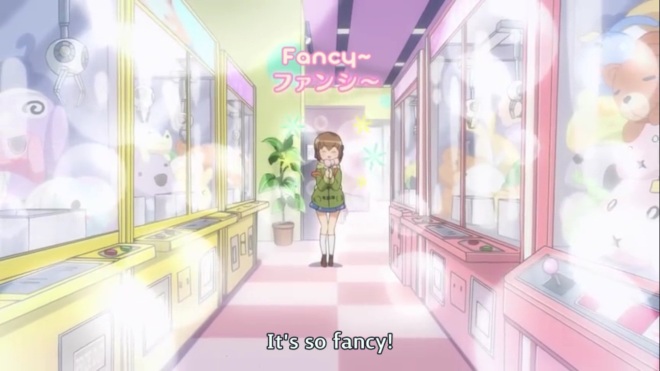 The anime is moe. It features cute characters with child-like design. Even the teacher of the characters looks like a child because of the moe of the anime. The characters are all clichéd but the familiarity is a nice touch. I don’t like Tsumiki though because she looks like a Konan (from Lucky Star) clone with a bigger ahoge.  The child like does bring out the anime’s laid back and comedic feel which is a great thing.

The animation in this anime is surprisingly smooth. A lot of the scenes are dialogue heavy but the anime has some scenes where the characters move a lot and it’s really nicely done. It’s simple animation but the execution is flawless. The kick the can scene is especially nice because the anime goes over the top sometimes and the characters become doubly cute because of it. There is also a lot of comedy through bodily harm especially on Sakaki and the animation was pretty nice as well. I love seeing him get hit by a flying Frisbee or a hurling baseball because the anime did a great job making the scenes funny. It was a bit overdone but it was funny nonetheless.

The anime’s music is cute like the rest of the anime. Its honey dipped in honey in its sweetness. The OP is “Acchi de Kocchi de” by the Acchi Kocchi cast. It’s a nice song with a catchy beat. The voice actors in the anime did the opening. I think it’s all five of them but I’m not sure. The one thing I’m sure of is that the song is really impressive because of the stand out voices of the singers. The OP sequence is cute as well. It captures the entire anime to a tee and the best scenes in the anime are included in the anime. It also introduces all the characters but it mostly features the two lovey dovey character because the song is a bit romantic. It reflects the anime’s moe X Romance combination.

The ending song is “Te wo Gyu Shite ne” by Tsumiki Miniwa. It’s cute as well with Tsumiki’s voice being a bit fuwa-fuwa which is a nice touch. Her voice has a childlike appeal to it and it makes the song more memorable. Tsumiki’s voice actress is really impressive. If it doesn’t then I’m sure the nendroid figures spinning around in the ending sequence will catch your attention. The ending song also reflects the romance moe of the anime with bonus addition of nendroids.

5/10 “It became repetitive after the first half.”

It’s a cute anime but it could’ve been better. Oh well, that’s how it is. If you love moe anime like Lucky Star then you’ll love this anime. Don’t expect a story though or anything serious. This anime is just pure pointless comedy with a nice dose of romance.