This is review number eighty and thanks to a broken hard drive, I’ll be reviewing the Summer 2012 anime lineup now. Yeah, I have a lot to see in the other lineup but the hard drive I store it in is now broken. Oh well. The anime I’ll be reviewing is Natsuyuki Rendezvous that is one of the anime released under noitaminA. This is an amazing eleven episode anime that I urge everyone to try. Let’s read on.

Natsuyuki Rendezvous is about Hazuki who like this florist named Rokka Shimao. He would always buy little potted plants just so he could talk to her. His room is filled with the plants and all of his dreams to one day date the florist. One day, the flower shop was hiring a part timer and it was the perfect opportunity for Hazuki. He was able to become closer with Rokka and he was able to confess his feelings. There’s one problem though. Rokka is a widow and she is still hung up on her husband that died three years ago. Hazuki is determined to be with Rokka even if it means going up against her husband, Atsushi Shimao. Bad news for him, Atsushi has been watching over his wife like a ghost and Hazuki the only person that can see him.

So here’s my first crack at the Summer 2011 lineup and this one happily belong to the noitaminA block. It’s a strong block that had a lot of anime that I watched in one sitting. It’s an indication that they had a strong plot and they offer something intriguing that time passes by as I watch them. I had Moyashimon Returns in my hard drive until I found out that it was a second season so I’ll take a rain check on that. I started with Natsuyuki Rendezvous. The last anime that made me cry was AnoHana which also belongs in the noitaminA block. It had a strong theme about moving on and forgetting the people that is no longer here on Earth. You should’ve seen me cry when the ending song comes up while the anime enters a sad scene. It was such an impressive anime that I immediately told others about it. I guess I’ll be doing the same to Natsuyuki Rendezvous because if a drama anime can make me cry then you can bet its damn good. I watched the first episode and I immediately had a smile on my face because I know I’ll be enjoying this anime. The familiarity of the situation and the subtle set up of the premise easily got to me. I was excited how the anime will handle itself.

I actually like the premise of this show because it’s unbelievably unique. The dead husband watching over his wife unable to let go and this determined guy who wants to be with her fighting over the right to love her. All of this happening while the girl is torn between forgetting her dead husband and using the young guy to fill a void her husband left behind. The eleven episode set up is just right because the anime is pretty straight forward. There is no subplot and the main cast is just the three characters. It had a beautiful theme about love that never dies and love that can overcome anything. The plot is simple and it’s easy to predict the outcome but the journey from point A to point B is something you’ll never expect. All the heart wrenching moments of the anime is emotionally captivating mainly because the story is really well done, the pacing is just right and the characters are so very well developed.

The anime did a nice job of developing the characters because of all the monologues and self-introspection the three main characters do. You can clearly feel their honesty and their vulnerability as they think about the unfolding events. Hazuki is easy to sympathize with because he has a lot of monologues of how he feels undeserving of Rokka’s love and all of his uncertainty vividly told through his words. Atsushi has a lot of his own too with the idea that he is mere hugging distance of her wife but he can’t touch her. His longing to be with his wife and his stubbornness to keep her by himself is nicely established. He’s not really a bad guy by spoiling all of Hazuki’s advances. He’s alone in a world all by himself and the only one who can see him is the one person who plans to steal his wife. Rokka is the best character for me because she’s complicated. The idea of being unable to move on but still wanting to love this new guy is unbelievably complex but something very human. It’s very easy to like and relate to characters which adds more depth to the anime because all the tear jerking moments of the anime wouldn’t be as effective if you don’t feel for the characters. How can you not though? The characters are so very human and they have personalities that viewers can easily relate too.

The drama aspects of this anime are effective. The execution of the drama is great and it’s greatly accentuated by the characters. I am trying hard not to spoil the story but Rokka’s love for her deceased husband, Hazuki’s persistence to be with Rokka and Atsushi’s longing to be with his wife even after death is where the drama is strong. The mix of Romance and Drama is the anime’s greatest strength. Love is very complicated but it’s something very easy to relate to. The story of the anime coupled by this great mix makes this anime really superb. It’s not hard to excitedly see the next episode because the scenes just keep on building until the end. It’s a great thing I waited for it to finish. It reminds me of the great achievement of AnoHana but with a complicated love triangle replacing the “unfinished business” theme of AnoHana.

I do admit that there were a couple of episodes were the anime dragged the story but it makes a big comeback afterwards. Once you’ve reached the second half then it’s not hard to see the anime through. The realistic set up of “moving on” coupled with a strong dose of love and drama really makes this anime amazing.

The animation is OK. There isn’t really anything big happening on the anime and it had a laidback presence to it so the animation is just enough to let you focus on the story. The best animation in the anime is the facial expressions because most scenes involve the characters slowly tearing up. The anime has a nice color scheme that is bright but very relaxing to look at. 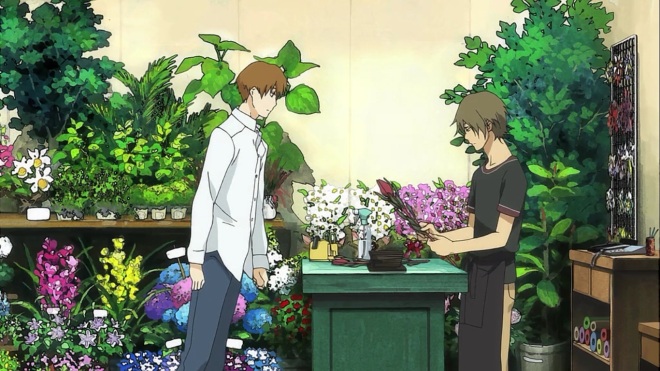 The background is where the anime truly stand out. The flower shop is the first thing to grab your attention because of all the nice painted flowers on the background. The different varieties and the different colors mingling with each other are very nice to look at. Most of the scenes are real places painted over and the anime did a great job of capturing the landscape of the area. The scenes also establish the mood of the anime. I really enjoyed the forest scene with a messy forest path with sunlight peeking through the leaves. It’s very nice to look at. 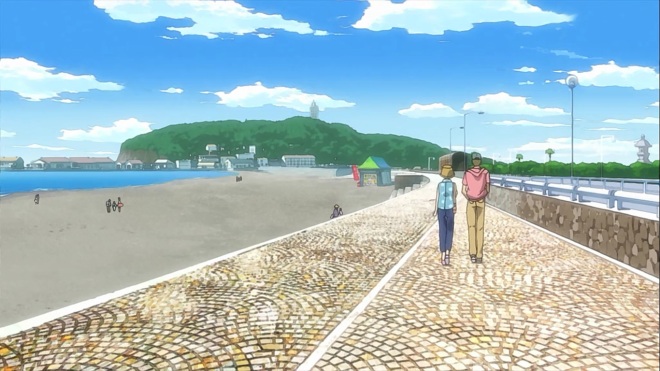 There is a very touching piano arrangement in the background of some of the most dramatic scenes of the anime. In the second half, when the familiar piano music commences, you know it’ll make you cry. It had a nice soothing sound that is melancholic and sad. Musical piece are really important in Drama anime. It remind me of the same sad piece in Twin Spica.

The opening song, “See You” by Yuya Matsushita, really captured the essence of the anime. It reflects the Romance and Drama of the anime which the anime is abundant with. Yuya’s voice is really nice to listen to because the song is really touching and heartfelt. The opening sequence nicely summarizes the events of the anime without spoiling it. It captured everything the anime had and as you progress to the anime, you’ll be able to understand the scenes in the OP sequence like the little kid at the end.

The ending song, “Anata ni Deawanakereba ~Natsuyuki Fuyuhana~” by Aimer, had the same effect. It reflects the sad and romantic scenes of the anime. It’s greatly accentuated by Aimer’s amazing voice. The ending sequence featured a long shot featuring the characters and the amazing colors of the anime.

7/10 “A solid drama and romance that will bring you tears.”

This is a great anime that you’d be a fool to miss. All the great aspects of AnoHana in a brand new wrapper but with a completely unique feel to it are too good not to watch. It’s familiar but also new that you will really enjoy. I highly recommend it.