This is the second season of the lovable Ika Musume and her life above the sea. She is still determined to invade the surface but it doesn’t stop her in enjoying other people’s company. She is still founding out new things about the surface and enjoying the company of the siblings running the beach shack and the friends she met on season one.

I still remember the first season of Ika Musume as an unsuccessful anime with good intentions. It did what it was set out to do and that was to make the viewer’s fall in love with the squid girl. That’s good and all but they sacrificed a lot to make it work. They left the other characters undeveloped and as mere stepping stone for the squid girl to shine. It was so weak on character development that it kept adding more and more one dimensional characters up until episode eleven. The anime was twelve episodes long so when you were hoping the already established cast would be introduced some more, they don’t and they just keep putting the spotlight on the squid girl. The setup of the anime was a bit weak as well. One normal episode was divided into three mini episodes which made the anime very boring. The comedy aspect was low as well. Only one out of three of the mini episodes would make me laugh. It’s alright though because Ika Musume is f*cking cute. Let her wave her tentacle and a lolicon would defend the show to the death. “Oh, I enjoyed it because her tentacles reminded me of tentacle porn.” That is very nice.

This may be the last anime of the Fall 2011 lineup that I will review for now. I saved this for last because I was really not looking forward for more Ika Musume. Hey, I love some plot in my anime. Seeing a cute girl with tentacle hair isn’t enough for me. I should watch Working II instead. Nah, screw it. I will admit that Ika Musume II is better than its previous season simply because it fixed what was needed to be fixed on the previous season.

Season One lacked a lot of character development because it was busy making Ika Musume look good. I’m not really sure season two did a great job of fleshing out the characters but the mere fact that there is no boring character introduction in this season made it easier to watch. We all know the previous cast and we all know what makes them special. The first season did all the heavy lifting so when this season rolls in; it delivers a lot of funny moments by just the character interaction. It had a smoother flow to it compared to the first season and the chemistry of Ika Musume with the rest of the cast made the anime very enjoyable. Yeah, the anime is still about Ika Musume’s everyday adventure on land but some episodes give the spotlight on the rest of the cast. One brilliant example is when Ika Musume was dragged by this kid to play house with her. Ika Musume pretends to be a father then some familiar character joins in on the pretend house and it’s their individual personalities that made the episode that much funnier.

The first season also lacked a bit on the comedy aspect and this anime had more brilliant moments to it. Ika Musume’s misadventures are still heavily featured. Most episodes start with her going “What’s that” What’s a tanabata? What’s a bamboo boat? What’s tickling? Then they build the episode from there. Her stupidity and unfamiliarity with the object or tradition is still part of the gag but instead of overshadowing everyone else, the rest of the cast keeps up with her craziness. Some of the episodes are often about the rest of the cast and I appreciate that some of the weirdo in the anime is given some air time. I love one episode where the Minami Kaze owner invited them to dinner and his bluntness scared the cast. In season one, I would enjoy 1 of 3 mini episodes but in season 2, I am very much involved with 2 of 3 episodes. At times, I even enjoy the entire episode.

The one thing that made season two very well executed is the simple fact of familiarity. We are already familiar with the cast because they were all introduced in the previous season. We are already familiar with their attitudes and what they bring to the show. We are already in loved with Ika Musume so it’s not that hard to enjoy the second season. The anime also introduced some new characters but they didn’t eat much time like the character introduction in the previous season. It is such a smart move by the anime but it’s also a huge pitfall. I enjoyed this anime because I’ve seen the previous season. Most people who aren’t aware of the first season may get confused at the anime but it’s a minor complaint of mine. Then again, who the watches a season two and skipping the first one? 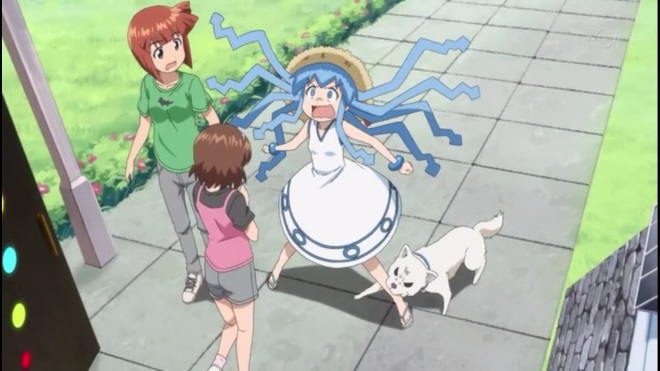 The enjoyment factor in this anime is definitely high but I still have a huge complaint the anime never met. It’s the same complaint I had about the first season. I still don’t know anything about Ika Musume. I pointed out that the first season never mentioned Ika Musume’s past or introduce any of her aquatic friends. I don’t think she is the only squid girl in the anime considering she must’ve popped out of something, right? The second season seemed to have completely swept it under the rug and no longer question her identity. Nobody cares if she’s the only two legged squid girl in the entire ocean. No one cares if she doesn’t have any parents. It’s all good. I just can’t believe that. It doesn’t distract from the enjoyment though. It’s just a thought that keeps me up at night. Seriously, it does. Along with the idea of who Natsume’s (from Natsume Yuujincho) grandfather is, considering his grandmother is an outcast.

Ika Musume is the only character that really developed in this anime. She started out as this girl who is oblivious with the customs of the land above the sea and she is often childish when she doesn’t get what she wants. She transformed into this caring girl with friends her age (I think they’re her age). A lot of people started liking her and caring for her. She even has a bunch of admirers. She isn’t the same squid girl that crawled out of the sea in season one. Even her plan for world domination slowly fades in season two. She is the most crucial character but the problem with her is that she is often just a mascot. I’m really surprised she developed a lot in the second season.

I really enjoyed this anime. Some of the first season’s episode literally put me to sleep. In this season, I was really looking forward to it. I pointed out in the first season that this is the kind of anime that you can’t marathon and you can just watch when it is on TV when you’re randomly switching channels. Season two can be marathoned easily because it had a lot more strong elements to it. Hell, I was even looking forward to that weird chibi segment of the anime. The anime really doesn’t disappoint and leave it to an anime you hesitated to watch. It always grabs you from behind and surprises you.

The animation is the same. The tentacles movement is fluid and there is a lot of movement in just one of them. There was a small fight at the later parts of the anime and it was nicely paced with clear animation. The standout though is the facial expressions. Ika Musume herself would start out with a clueless face then she slowly smiles and you can count the frame rate of it. It’s so smooth.

The character design is also the same. Ika Musume and her cute costume is the obvious stand out. The rest of the cast is the same as they were in the previous season. I did notice that the characters wear the same clothes over and over. Cindi seems to have just one bikini to wear as we always see her wear the same green stripes. It’s a failed opportunity for the anime because they could showcase the rest of the characters if they change the clothes and bring out their sex appeal or cuteness.

The opening song, High Powered by Sphere, had the same energy of the anime. It wasn’t as crazy as the first season’s OP but it was still whacky and fun like the anime. I prefer this one too because the vocals was very nice to listen to. I’m not fond of “Ika, Ika” being repeated several times. I hurt my ear. The opening sequence is nice with the cast being showcased splendidly. No spoilers but some teaser of the best parts of the anime.

6/10 “A strong second season about the very beloved squid girl.”

The characters are very nicely represented, the comedy aspect is also strong and Ika Musume shines tremendously. It had a huge improvement than the previous season that I really appreciate. I easily give both seasons a 9/10. I highly recommend it.