Hello there. This is review number fifty three and I’ll be reviewing a good one. No, a great one. It’s part of the Fall 2011 line up. It’s Mirai Nikki. It’s the anime that features Yuno Gasai and all her yandere goodness. The Summer 2012 lineup is also halfway through by the way and I can’t wait to watch the anime in that line up.

Anyways, it’s twenty six episodes full of psychotic people and a lot of gore. That sounds like a fun ride, right? Let’s read on.

The main character is Amano Yukiteru. He is a shy guy who mostly keeps to himself. He likes writing down things he sees in his cellphone that acts as his diary. He’s very detached and prefers to only talk to his imaginary friend, Deus Ex Machina – The God of Time and Space. One day, he notices entries of his diary written in advance. It tells him of things occur in the future. He uses this advantage to cheat on tests and avoid bullies.

Things went from top to bottom when a serial killer was suddenly out to get him. This killer is after his future diary and Yukiteru soon find himself trapped. He was then saved by Yuno Gasai, the pretty girl in his classroom who is also his stalker. She tells him of why the diary can predict the future and states that she and the killer also own diaries that tell the future.

Yuki soon learns that Deus is more than a figment of his imagination when he makes Yuki participate in a battle royale with eleven other people. The contestants are given special diaries that can predict the future, each diary possessing unique features that give it both advantages and disadvantages. Within the next 90 days, the contestants must try to survive until there is only one left standing. The winner will become the new God of Time and Space. 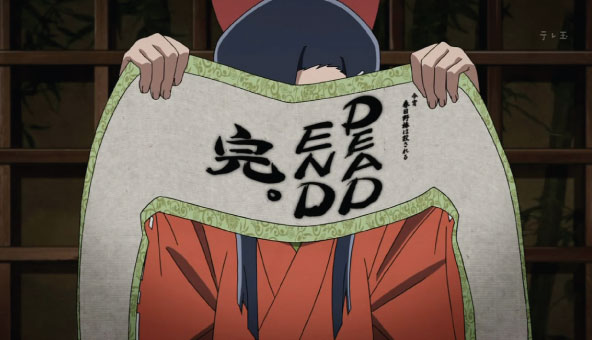 I actually saw the anime some odd months ago and unlike my pattern of reviewing anime where I watch first and write immediately afterwards, this review is based on my long lasting impression of Mirai Nikki. I want to try this out if I can actually do a review of an anime I’ve watched a long time ago. Well I picked an easy one though because Mirai Nikki is good. The overall anime is delightful and it’s a very enjoyable thing to watch from start to finish.

Let’s start with the story. The anime is about the god of time and space choosing twelve individuals to succeed him and he decided to hold a contest to determine who is worthy of that honor. The contest is simple: you kill the other eleven participants. Each participant is given a “future diary” to use how they see fit. These diaries can tell the future and predict when a participant can die. The participant can prepare for that though and they can avoid that death and rewrite the future. Each future diary is special and has their own advantage and disadvantages making them unique to the users. The anime is mostly about each character trying to kill each other in a deadly mind game. Who will become the new god of time and space?

The participants are no ordinary office workers or some average joe. One thing that makes the participants unique is that they are mentally insane in their own special way. It’s one of the great surprises of the anime to know who the characters are. They range from terrorists to serial killers to an antisocial high school kid. Each participant brings their own flare to the anime that makes the experience unique and more fun to watch. 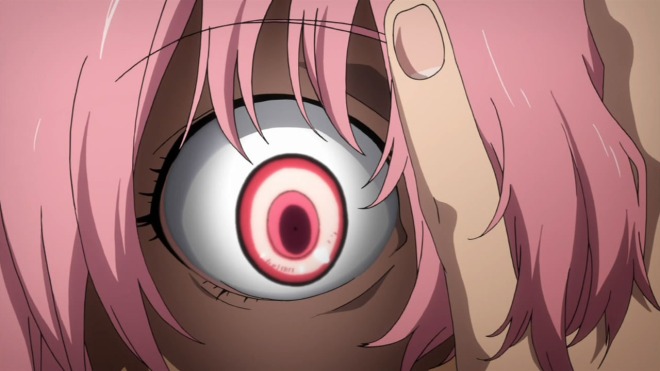 Of course there is one character that is a stand out in the anime and she makes the show much more thrilling to watch. She is the anime’s resident yandere, Yuno Gasai. It’s actually been awhile too since I’ve seen a yandere in anime. The last one I saw was in ChaosHead maybe but the one that ultimately left an impression on me was that crazy chick from Shuffle and Kotohana from School Days. Yanderes are super special that starts out normal and sweet and without prior warning or signs, they turn psychotic. How psychotic? Rip your head from your body and cradle it kind of psychotic (School Day reference). Yuno is essentially the same sharing a deep obsession with the main character of the anime. The best part about Yuno is that she is shrouded in mystery and she is completely unpredictable. One of the plot points of the anime is figuring out exactly who Yuno is. She’s experienced in killing, her smile is f*cking creepy and her ability to always be two steps ahead is so intriguing.

Yuno’s character shines so brightly because of main character is mainly sh*t. Yukiteru Amano is a pathetic guy with no special ability whatsoever that makes him special. Perhaps his absolute blandness makes him unique because the rest of the characters are psychopaths and murderers. He is just an ordinary high school kid who loves to write what he sees on his diary (in her cellphone, f*cking technology) and one day, he notices his diary has some content that predicts the future. He uses it to avoid bullies and cheat on tests but little did he know that he is actually taking part in a deadly survival game. Yukiteru don’t want to be part of the game and basically wants to be alone. He’s a wimp and he doesn’t want to kill or be killed. Bad news for him because he is tagged as number one and the rest of the participants is basically out to get him.

The annoying part about the anime is that Yukiteru never gets a chance to shine. He never stepped up on the occasion and he leaves all the work of Yuno while he hides in a corner. Throughout the anime, it’s always like that and I just really wish Yukiteru was never the main to begin with. It’s my minor complaint but there are so many good things in the anime that it doesn’t matter if the main is a coward and the girl is doing all the labor. 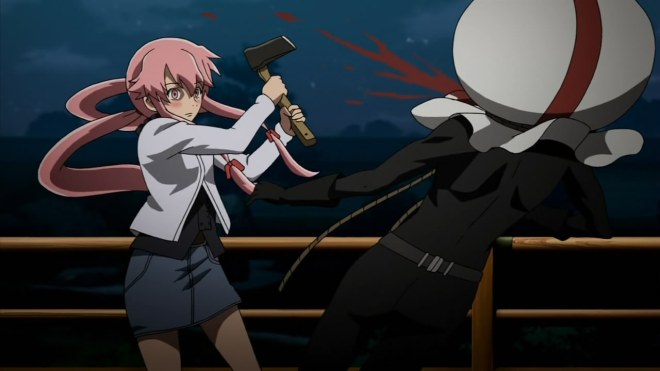 The plot of the anime is interesting. The best thing about it is that it’s unpredictable. It starts out fairly simple with Yuno and Yukiteru trying to survive while being challenged by the other participants. Some characters are established and their role in the anime is ascertained. The fights were straight forward with Yuno and Yuki nicely dodging everything thrown at them. The participants started to reduce in numbers and all was going well.

The story suddenly changed gears though and instead of a clean story where the participants die, the anime throws in some interesting surprises and some twists that ultimately leave you wondering how the anime will progress. The appearance of characters with no future diaries throws the anime along the straight forward storyline and the intervention of the god of time and space and his assistant shakes the competition up. Going forward the second half the anime; it’s no longer a straight forward survival game. It added some elements that make the anime a bit odd. I’m trying not to spoil the story (and I’m amazed I still remember much). One of the biggest problems is trying to utilize Yuno, both her stalker personality and her yandere personality. There comes a point in the anime where you ask yourself why Yukiteru still trusts Yuno with his life despite knowing she is mentally unstable and completely unpredictable.

The best part of the anime is that it is really insane. The fights are gory and graphic. The anime uses blood not just to enhance the story but to make the anime exciting. There are a lot of super crazy things in this anime like for one, Yuno using an ax to kill an unconscious guy. I saw a censored version so some of the extremely graphic parts are a cut but the idea of such acts still drives me crazy. The action is addictive and it’s not long before you’re sitting down watching and waiting for someone else to die.

The later part of the anime is where the anime eventually disintegrates. The anime tried to end the anime conclusively with no cheap open ending or unanswered questions. I personally hated the ending and I felt that it was a cop out that the anime took. I will admit that the last twist the anime presented was great and something I didn’t see coming. I also love how Yukiteru finally got a hold of his balls and did well in the end. It’s an ending you either love or hate and it’s completely up to you. Mirai Nikki is an incredible anime and something you should definitely see.

The animation is decent and it doesn’t really stand out compare to other thrilling anime of the Fall season (like Guilty Crown). The character design is plain and all the characters are run of the mill in terms of design. They stand out mostly because of their demeanor. There were a couple of pleasing designs though like Yuno being sexy despite having a crazy smile and I love the blind crazy vigilante.

The one thing worth noting about the anime is the blood. The action sequences are nice and they were interesting but the blood elevates it making it more memorable. I personally love how realistic the blood is and how fluid it was animated. 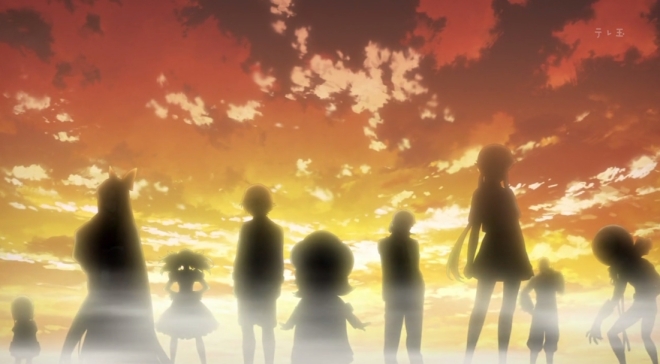 The anime had two opening song and they were both great. The first one is a bit goth with a pretty creepy opening sequence to accompany it. It did great on presenting the characters of the anime without many spoilers and you can see how awesome the blood is from the puppet and the ball. The best part is this crazy animation where Yuno is going batsh*t crazy full on yandere mode.

The second opening was great as well. It had more of a jpop feel to it but it still fits the anime nicely. The OP sequence was a bust though as it showed major spoilers in the anime. I was absolutely pissed that the anime introduces some of the remaining unknown participants in the OP. That was annoying.

The anime also have two ED songs. The first one was great. It had a nice beat and the ending sequence had a nice touch of the blood and horror of the anime. It still had spoilers though but you won’t get to connect the pieces until the second half. The other ED was a bit sadder with a pretty sweet ending sequence. We see Yuno in a very vulnerable state completely different from her regular persona.

The anime had a lot of good things going for it. The characters are memorable, the plot is unpredictable and the action is insane. Yuno is also gives the yandere name proud. It had some minor downsides but the positives outweigh the negatives. I highly recommend it.